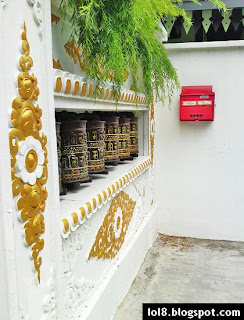 Today is the day Buddha Shakyamuni first turned the Wheel of Dharma, hence it was a merit-multiplying day (multiply by 100 million times).

I was in ABC to join in the Hayagriva puja. It was a whole day of extensive prayers. Hayagriva is a wrathful manifestation of the Compassion Buddha - Avalokiteshvara (Guan Yin). This practise is in the lineage of Amitabha Buddha. Hayagriva's special ability is to cure diseases. This is especially relevant in the current global H1N1 flu epidemic.

The photo on the right was taken at ABC's entrance where 10 prayer / mani wheels were permanently installed at the entrance so that anyone could turn the prayer wheels. It is believed that by turning the prayer wheels (with millions of mantras inscribed inside), it helps wisdom, compassion and bodhichitta to arise in the practitioner.

Lama Zopa Rinpoche has commented that installing a prayer wheel has the capacity to completely transform a place "...peaceful, pleasant, and conducive to the mind." Simply touching a prayer wheel is said to bring great purification to negative karmas and obscurations.


I make some donati 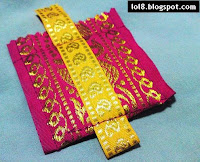 ons both at the centre and online. I also sponsored or rather made a little contribution for the puja and animal liberation. After the puja, the sponsors each received a protection amulet which has been sacredly blessed during the Hayagriva puja. There were 9 lamas who presided over the puja. I was pleased that I was given a bright pink amulet (there were many others each in different colours) which has been greatly blessed and consecrated.

By the way, when I came home this evening, I found out that I had striked 4D!!! Both my parents also striked, and they were very happy. It was an auspicious day with a really happy ending. I'm elated as I usually strike some money (be it small or big amount) on special days. I guess it just goes to show that we need to create as much merits as we can in order to reap some rewards (not necessarily monetary). Rather, more importantly to me, are the mountains of blessings from the Buddhas manifesting in other ways as well. Woohoo, I'm happy!
yours truly, STUMPBO @ 11:59 pm