9 August was Singapore's National Day. To Buddhists, it was also an auspicious day as coincidentally this day this year marked the Enlightenment of Guan Yin (or Avalokiteshvara or Chenrezig). Double celebration. I love Chenrezig dearly as I realised I have the most affinity with him. 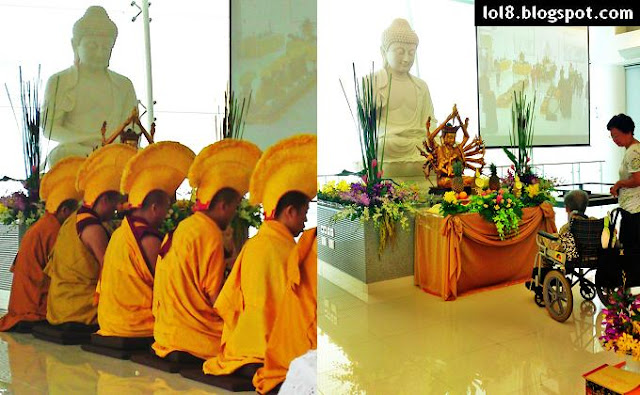 ABC had a series of pujas the entire day but was held in another place, Poh Ming Tse, which was a new building with a great hall. The resident lama, Geshe Chonyi, was to preside over the pujas with 10 lamas starting at 8am. I planned to attend the Chenrezig puja at 9am. Although I had wanted to be there by 8am, I could not get up (hehehe). I even thought I would not be able to wake up and would likely miss it.

However, just the night before, I dreamt of Geshe Chonyi for a few brief moments! In the dream, I was in a strange place attending the puja, and I saw the humble Geshe Chonyi smiling kindly and meekly.  In the dream, I had wanted to ask Geshe Chonyi why was the puja held in Poh Ming Tse instead of in the centre. Before I could open my mouth to ask, suddenly a voice spoke out of nowhere. There was no one in sight, only the voice. The voice said loudly "Yes, he (Geshe Chonyi)  should and better have the puja here!" and Geshe Chonyi continued smiling meekly. That was it, I got my answer without me asking. Hehe, I thought it was quite a comical short dream. Wonder who was the voice?

So of course I did not miss the puja which went on till lunch time. I felt happy and serene.
yours truly, STUMPBO @ 1:01 am