I just read the latest entry by Cynthia Koh, our local actress/celebrity in her blog about tsa tsa making. She is helping a vegetarian restaurant in making tsa tsas to raise funds for the TSUM project.  Donors will be able to sponsor the tsa tsa back home. I'm happy that despite her busy filming schedule, Cynthia, as well as so many other benefactors are doing their part to raise funds for the monastery and nunnery in Tsum valley. Please check out Cynthia's blog about this event and her other inspirational stuff!   May Tara bless her and all the sponsors, benefactors, supporters and selfless volunteers of this fund raising event and may all their obstacles be swiftly eradicated by Tara! Om Tare Tuttare Ture Soha!  (Right: Cynthia with her smiling Tara tsa tsa).

Tsa tsas are sacred images that have been made by Tibetan Buddhists for hundreds of years as part of their meditation practice. The making, offering, and sponsoring of tsa tsas is a powerful means of dispelling obstacles to one's practice and well-being.


The TSUM Project is one of the many projects undertaken by the FPMT (Foundation for the Preservation of the Mahayana Tradition) worldwide, spearheaded by my precious guru, Lama Zopa Rinpoche.

In 2003, Lama Zopa Rinpoche was requested by Dukpa Rinpoche, a Bhutanese lama, to take care of his monastery and nunnery in the remote Tsum valley. Tsum valley is located in the northern border area of Nepal close to Tibet. The monks and nuns of these two places were in desperate need of help, being unable to support themselves any longer. Lama Zopa Rinpoche accepted the request immediately. He asked Tenzin Zopa, a disciple of the late Geshe Lama Konchog, to take on the task of finding support for the people of Tsum.  The living conditions of the Sangha in Tsum have improved tremendously since 2003. People all over the world have shown keen interest in helping to make this possible and have donated generously. Now the monastery is able to offer 3 meals to over 200 over lamas everyday, free medication to all Tsum villagers, free languages and spiritual education to all monks, nuns and children. 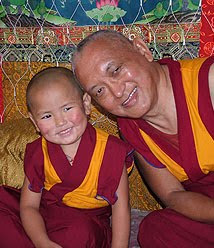 It is said that in the remote borderlands of the high Himalayas, several valleys are only open to those with a very pure mind and heart. According to ancient scriptures, they were established by Guru Rinpoche, the 8th century Indian saint credited with spreading Buddhism into the Himalayas and Tibet. Hidden valleys are havens of peace, prosperity and spiritual progress, a place of refuge for believers. Even non-Buddhists understand why Tsum is perceived as a blessed land.


On a separate note, Tsum Valley is where the reincarnation of the enlightened being, the late Lama Geshe Konchog, was discovered. Seen in this photo, my guru Lama Zopa Rinpoche with the  little Living Buddha, reincarnate Tenzin Phuntsok Rinpoche.
yours truly, STUMPBO @ 1:16 pm