I was in some place primitive, with old houses and some old buildings. The old houses looked something like a kampong with one or two houses doubled up as a old shack of a eating place, with wooden chairs and tables. A shabby place. I was wandering around the kampong and even checking out the dusty eating place. 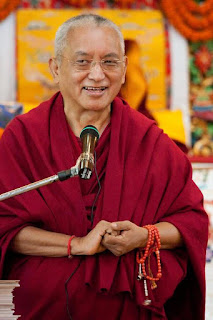 Then I entered an old building, which was quite a small place. On the ground floor, I saw rows and rows of chairs all lined up neatly, partially sheltered and partially in the open air. Right in front was a small stage. And just as suddenly, I saw there were throngs of people who were seated on the chairs but beginning to get up to leave (funny a few seconds before, the place was empty). It was so familiar and instinctively I knew there was maybe a Dharma teaching going on. The people or the volunteers were frantically rushing around. Then just as suddenly, there appeared on the small stage was my root guru, Lama Zopa Rinpoche! He was smiling and whispering something to someone next to him. Everyone was listening intently to him with their heads slightly bowed. Then suddenly it seemed it was time for Rinpoche to leave. Everyone stood up hastily while some surged towards Rinpoche's direction. Lama Zopa Rinpoche walked past, blessing people on their head, whoever offered him the white khata. It was so crowded with shoulders rubbing shoulders that I could only catch a glimpse of Rinpoche from afar as he moved slowly out of the hall. I was at the other end of the hall. Then a lady volunteer appeared and told me to go to the back of the stage to get something.

I asked her what was I supposed to take. As I went behind the maroon curtains, one lady pointed to some stuff on a chair and told me, they were from Rinpoche for me. As I looked closer, I saw some Dharma pills, a red string (we normally receive this blessed string from the lama), a white khata, some books, and some other stuff. I was so touched. I wanted to rush out to find and see Rinpoche again, to thank him. However, the lady volunteer told me matter of factly, to quickly go reserve my seat in the front row, and then quietly whispered to me, that Rinpoche would be coming back again for teaching shortly. It was like nobody was supposed to know about the teaching or something, like it was a secret, all hush hush. I thanked her, and quickly retrieved the stuff which was meant for me and chose a seat in the front row. The rest of the dream I could no longer recall.