Vesak 2010 celebrates 2554 years of Buddha Shakyamuni's birth, passing into nirvana, and enlightenment. It has been a yearly practice for my family to visit the open field next to Aljunied MRT to offer our prayers. A gigantic tentage was erected and it was organised by Amitabha Buddhist Centre (ABC), for many years during Vesak.  Every year, thousands of people come together to engage in virtuous Dharma activities to create merits.

Tons of photos ahead.... 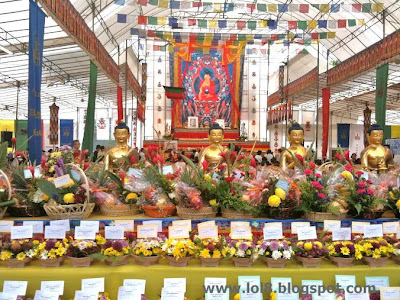 There were mountains and mountains of offerings - fruits, flowers, lights etc.. Every offering has a specific meaning, for example offering light is to dispel the darkness of one's ignorance, or offering incense to increase one's ethical behaviour. Offering is considered a good training against greed and attachment. 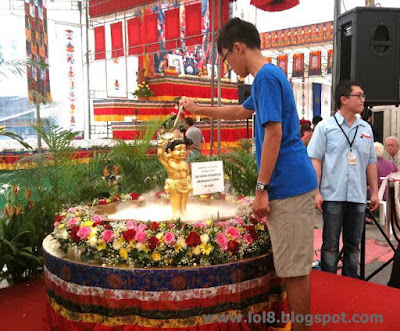 On the holy birthday of Shakyamuni Buddha, we participated in the Bathing of the Buddha, in order to establish our karmic conditions with the buddhas and also to wholeheartedly beseech the empowerment of the buddhas and to pray for peace and well being. While bathing the image of the Buddha with auspicious water, we cultivate in ourselves in attaining the purity of their three karmas (body, speech, and mind) in the past, present, and future. We should receive the great and remarkable teachings and guidance of the buddhas and uphold the correct belief.  In this way, we can correspond to the great and compassionate vows of the buddhas and attain accomplishment with the Bodhi state without regression. Practitioners should carry out the cultivation of a bodhisattva life after life until they attain the supreme enlightenment of a buddha. 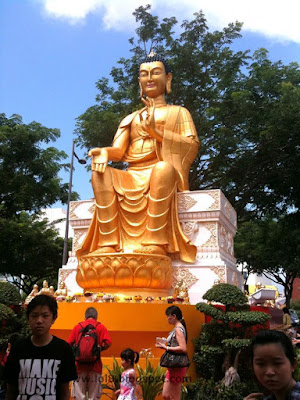 This is a 20 feet Maitreya Buddha Statue on the grounds. Under the compassionate eye of Maitreya Buddha, this statue is a replica of a 500 feet statue which is in the plans to be erected in  Kushinagar, Uttar Pradesh, India. The holy Maitreya Project is headed by my root guru, Lama Zopa Rinpoche.

Maitreya Buddha, the Future Buddha, is typically pictured seated, with either both feet on the ground or crossed at the ankles, on a throne, waiting for his time. As a bodhisattva, he would usually be standing and dressed in jewels. Usually he wears a small stupa in his head dress that represents the stupa of the Buddha Shakyamuni's relics to help him identify it when his turn comes to lay claim to his succession. 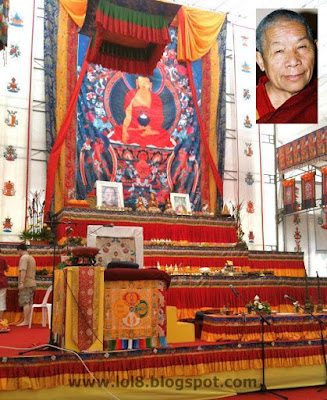 Khen Rinpoche Lama Lhundrup, abbot of Kopan Monastery, was here to give blessings to the Vesak Day crowd with a series of teachings and pujas. 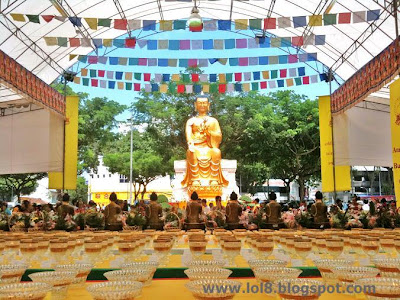 In Tibetan Buddhism practice, many or all of the offerings use little bowls filled with water which symbolises the offering of water for drinking and foot-washing, flowers, incense, light, perfume and food. This relates to the ancient tradition of how a very important guest should be received. 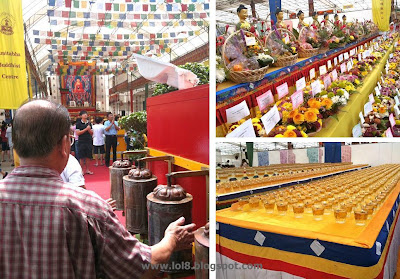 Offering flowers signifies the practice of generosity and opens the heart.  Offering incense symbolises moral ethics or discipline. Offering light signifies the stability and clarity of patience, the beauty which dispels all ignorance.

Also, according to my root guru, Lama Zopa Rinpoche, installing a prayer wheel has the capacity to completely transform a place "...peaceful, pleasant, and conducive to the mind." Simply touching and turning a prayer wheel is said to bring great purification to negative karmas and obscurations. 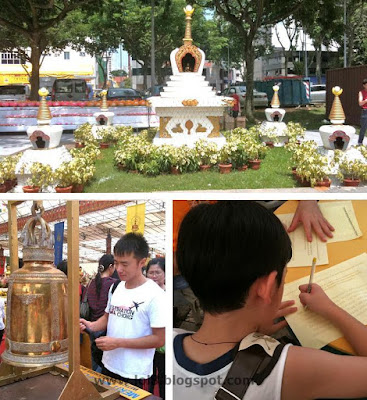 Lama Zopa Rinpoche said, "Building stupas is like creating Buddha's holy mind. The dust, rain and anything that touches the stupa and then touches others is the cause of purification and helps us achieve a higher rebirth. Anyone who sees touches dreams of or thinks of a stupa plants the seed of enlightenment and becomes meaningful to behold".  On the other photo, my nephew was doing tracing and writing the Sanghata Sutra. 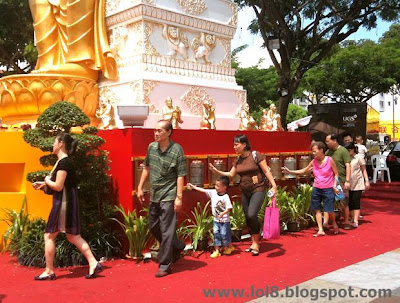 The crowds also circumambulated 3 rounds, offered light, flowers, and turned the prayer wheels around the holy statue of Maitreya.  Circumambulation is the act of going around an object of veneration, such as a stupa (a monument which houses holy relics of the Buddha or great masters), a Bodhi tree (which the Buddha sat under for shelter before he attained Enlightenment) or a Buddha image – for three times or more as a gesture of respect. It is done by walking clockwise meditatively, keeping one’s right towards the object of veneration. Doing so reminds us to keep the Buddha’s teachings in the centre of our lives.  So, through the simple gesture of turning a prayer wheel clockwise or circumambulating a holy object, one is paying homage, to doing what is right, and to following a true and enlightening path. 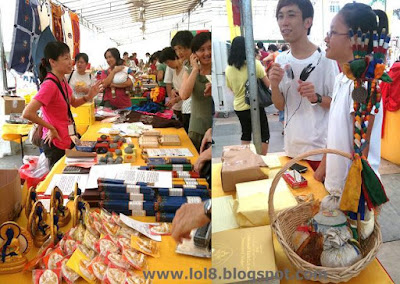 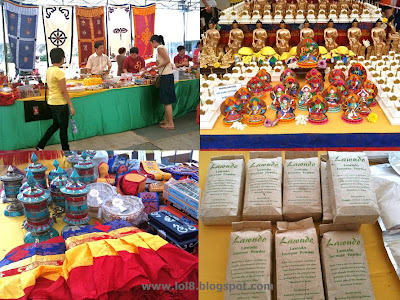 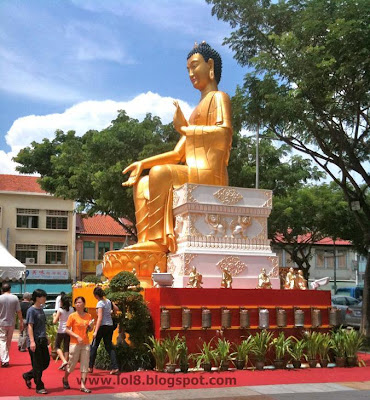 The late Lama Yeshe was the inspiring founder of the Maitreya Project. Currently the  Maitreya Project is headed by Lama Zopa Rinpoche. The name Maitreya means 'loving-kindness'. Throughout the world, the image of a buddha is recognized as a symbol of peace. The vision of Maitreya Project is to create peace at every level of society through the practice of loving-kindness: inner peace for the individual, leading to peace within the family, the community and the world. In the pipeline:
- a 500ft/152m bronze statue of Buddha Maitreya in Kushinagar, Uttar Pradesh.
- a 150ft/45m statue of Maitreya in Bodhgaya, Bihar. 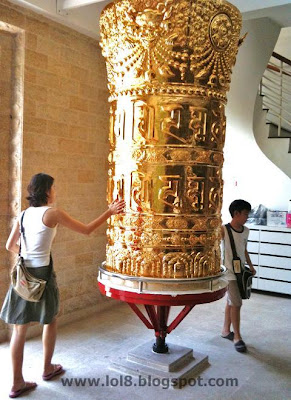 After our prayers and before leaving,  I brought the family over to ABC to see the newly consecrated giant prayer wheel. After many years of planning, ABC has finally succeeded in erecting a 156-billion mantra prayer wheel on the ground floor. The copper prayer wheel was constructed with the instructions and blessings of Lama Zopa Rinpoche. One turn of the wheel is equivalent to reciting the "Om mani padme hum" mantra 156 billion times. Hence it is so easy to collect unbelievably skies of merits as well as the cause for enlightenment. 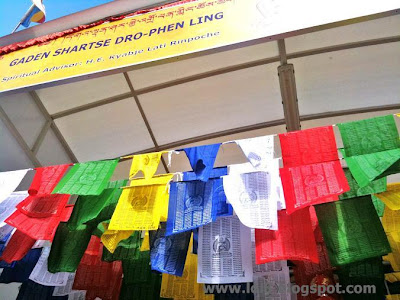 In the evening, I went to Gaden Shartse Dro-Phen Ling for the Shakymuni Buddha and 16 Arhats Puja. I attend the weekly pujas at DPL, hence I do make it a point to visit DPL on Vesak Day for the special puja. There was also a light offering ceremony along with circumambulation of the centre around the holy objects. 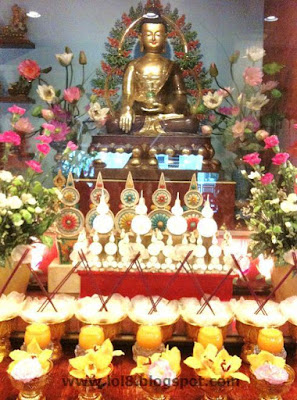 In the main hall of DPL sits Shakyamuni Buddha with torma and mountains of offerings.  I quote Geshe Thubten Chonyi of ABC, "we need to make extensive offerings in order to seize that precious mind of bodhicitta. It is very difficult to generate bodhicitta especially when our minds are not purified of obscuration and negativities. We need to accumulate the collection of merit so that the favourable conditions for generating bodhicitta can arise". 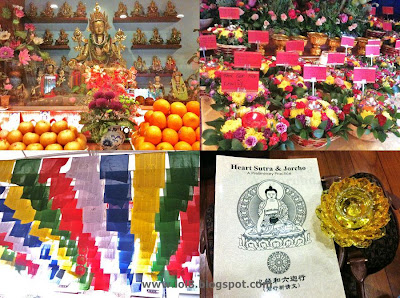 Similarly, offerings of food, flowers and light were laid on the altar. We also recited the Heart Sutra before the  puja and after the puja, we circumambulated 3 times around the centre, around the holy objects.  Notice the colourful prayer flags hanging high in the air. Traditionally, prayer flags are used to promote peace, compassion, strength, and wisdom. The flags do not carry prayers to 'gods,' a common misconception; rather, it is believed that the prayers and mantras will be blown by the wind to spread the good will and compassion into all pervading space. Therefore, prayer flags are thought to bring benefit to all. By hanging flags in high places, as wind passes over the surface of the flags which are sensitive to the slightest movement of the wind, the air is purified and sanctified by the Mantras. 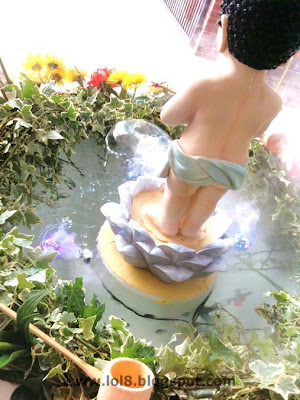 This was where we bathed Prince Siddhartha (The Buddha), reciting his mantra "oṃ muni muni mahā muniye soha". 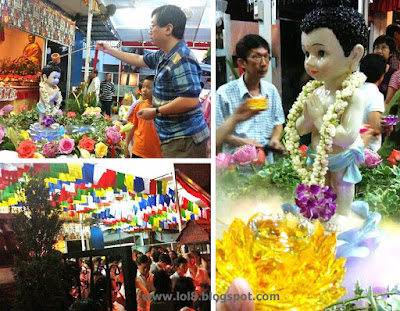 Shakyamuni Buddha, the Fourth Buddha, whose holy mind is enriched with the ten powers, announced in the "Tune of Brahma" Sutra Clarifying Karma that there are ten benefits of making light offerings:
1. One becomes like the light in the world.
2. One achieves the clairvoyance of the pure flesh eye [as a human].
3. One achieves the devas' eye.
4. One receives the wisdom of knowing what is virtue and what is non-virtue.
5. One is able to eliminate the darkness of ignorance, the concept of inherent existence.
6. One receives the illumination of wisdom, even in samsara one never experiences darkness.
7. One receives great enjoyment wealth.
8. One is reborn in the deva or human realms.
9. One quickly becomes liberated.
10. One quickly attains enlightenment. 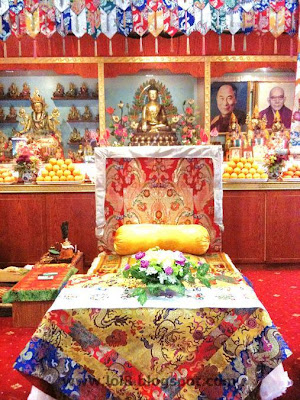 Great news! The throne seat is for His Holiness Dagyab Kyabgoen Rinpoche, who arrived a few days ago.  The Dagyab Kyabgoens have been the spiritual head of the Dagyab region in Eastern Tibet, and carry the title Hothogthu Nomonhan (meaning the Noble King of Dharma). This title is exclusive to a group of most outstanding and highest-ranking Lamas. 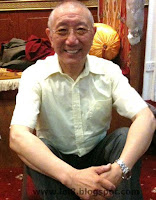 Rinpoche was recognized as the reincarnation of the 9th Kyabgoen of Dagyab. Rinpoche studied at the Drepung monastery and has also achieved the title of Geshe Lharampa (a qualification which is equivalent to the PHD degree in Indian universities), the highest degree awarded in Tibetan Buddhism.


Rinpoche is known to hold the most transmissions of the Gelugpa lineage, as well as a vast number of transmissions of the Sakya and Kagyu schools. Rinpoche himself received many teachings from different Tibetan Buddhist traditions, particularly from His Holiness the Dalai Lama and his two Tutors, as well as His Holiness Sakya Trizin and Kalu Rinpoche. He was also one of the closest students of the late Kyabje Trijiang Rinpoche. Rinpoche is a one of the rare living Masters today who holds almost all the transmissions and lineages of Tibetan Buddhism. 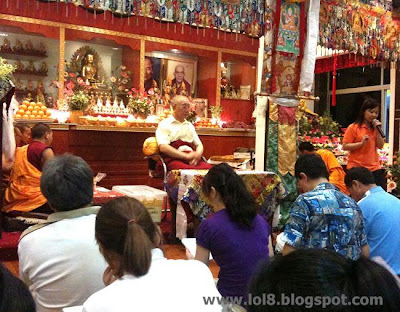 Dagyab Rinpoche joined us for the puja and he has also just started a series of teachings in DPL. Rinpoche is such a humble and friendly master, despite being such a high lama. This is the second time I have met Rinpoche but the first time with such close encounter with him. Rinpoche speaks fluent English, Tibetan and German. May his teachings benefit us greatly.

There will also be a grand 3-day public program on 17-19 June. For details of the Grand Puja From The Three Jewels, please click here. 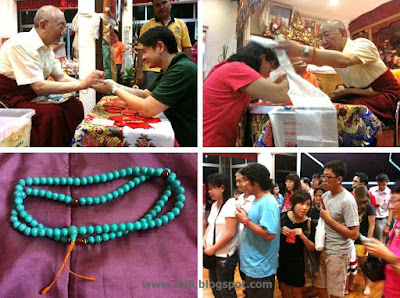 The auspicious Shakyamuni Buddha puja that night ended with us receiving blessings from Dagyab Rinpoche. Each of us received a special Vesak Day gift, a mala beads for our spiritual practice. There were many different types and colours of mala beads. Rinpoche gave me a turquoise-blue one. Many of us offered khata too. In a rare impromptu moment, I also managed to request a photo with Rinpoche, who very very kindly agreed. As it was a self shot photo using my iPhone, I could not clasp my palm as my hand was holding the phone (I usually clasp my palm if I take a photo with a guru, as a sign of respect).  Thank you, Rinpoche! I feel blessed indeed because there are masters and gurus who appear at different timings, at the right timing, to teach me and to guide me along my Dharma path.   _/\_ 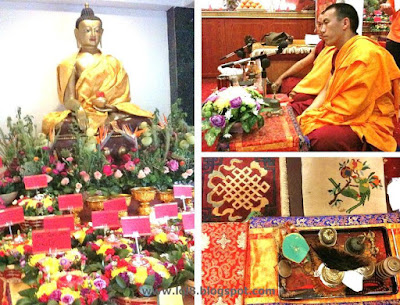 May everyone who has participated in any virtuous Dharma activities during Vesak Day everywhere in the world, be blessed by the Three Jewels and may we rejoice in the merits accumulated by our positive actions. On Vesak Day, our merits multiplied  by 100,000,000 (100 millions) times!
yours truly, STUMPBO @ 4:58 pm