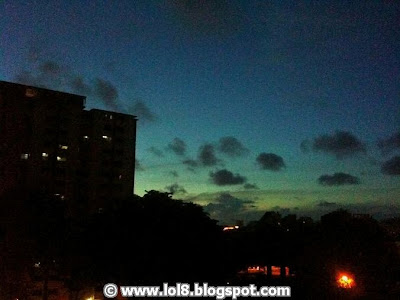 Yesterday morning I woke up at 5am+ pushing 6am, and took the 8 Mahayana Precepts. The 8 Mahayana Precepts (vows) are taken for 24 hours. It is especially good to take them on full and new moon days and on special Buddhist days. Yesterday was Chokhor Duchen, Wheel Turning Day, in which the merits multiplied by 100 million times! What not a better day to reap immense merits. Creating merits is definitely something we can be kiasu about! 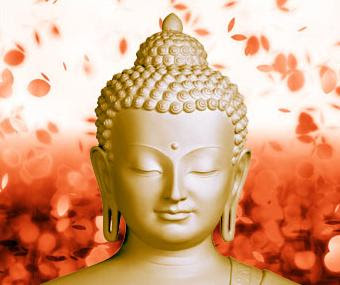 The essence of this practice is to be mindful of the Mahayana motivation; to take these precepts in order to lead all sentient beings to enlightenment.

The first time one takes the precepts, it is done from a qualified master / monk / guru. Thereafter one can do the ceremony before a Buddha image by visualising it as the actual Buddha. Another pre-requisite is one must have already Taken Refuge. I took the Precepts from Geshe Chonyi from ABC a few years ago, so now whenever I want to go on the Mahayana Precepts, I can do it on my own. During the 24 hours (before sunrise to the next morning sunrise), one can only take one vegetarian meal before 12 noon and thereafter fast till the following morning. Liquids without solids/pulp are allowed.

Observing precepts for even such a short time has tremendous benefits: one accumulates a great amount of positive potential (merit) in a short time. One will receive pleasant rebirths and eventually will attain enlightenment. One is protected from harm and the place where one lives becomes peaceful and prosperous. One's mind is peaceful and calm; one gains control over one's bad habits; there will be fewer distractions when meditating. One gets along better with others. One will meet the Buddha's teachings in the future and can be born as a disciple of Maitreya Buddha. 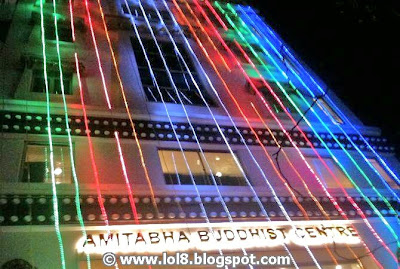 In the afternoon, I specially went down to ABC to join in the recitation of the Golden Light Sutra. When many people recite the Sutra together, the merits multiply many times. The Golden Light Sutra was 21 chapters long and it took us 4 hours to complete the entire text. As with the last time I recited the Golden Light Sutra, whenever I reached Chapter 17, the story of the "Previous Lives ofJalavahana's 10,000 Fish Disciples", I would be so touched that my hair would be standing. I don't know why. 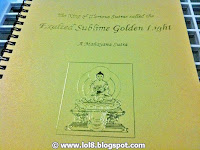 To summarise, the story tells of how 10,000 fishes were saved by a compassionate Jalavahana, a merchant's son, from a drying lake, as well as from flesh-eating animals and vultures. He not only tried to feed the 10,000 hungry fishes, he also expounded the Dharma to them. As a result, although the 10,000 fishes eventually died, from the animal realm, they were reborn as Gods of the Thirty-Three, due to the virtuous bodhisattava act of the compassionate Jalavahana. Jalavahana was Shakyamuni Buddha in a previous life.  The moral of the story is, firstly, Dharma can be propounded to even animals (liberate them in this lifetime), and secondly, you can become a Buddha, depending on your actions. 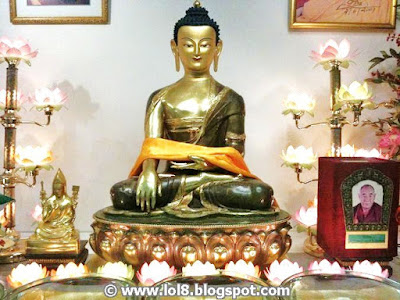 In the evening, there was also a Shakyamuni Buddha puja to commemorate the merit-multiplying day. The main gompa on the second floor was beautifully adorned with lots of offerings of light, food and flowers. 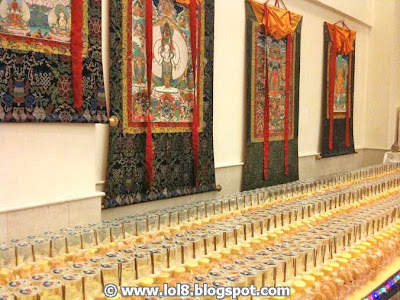 There were 100,000 water and incense offerings all around the gompa, amidst many Buddhas. Towards the end of the puja, when we were doing our personal dedications of merits as well as when we were chanting the dedication prayer for Lama Zopa Rinpoche's long life, I was a little touched with tears brimming. 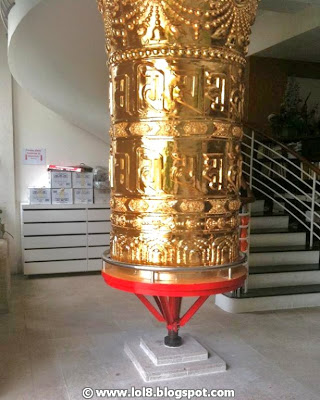 This was the newly erected giant Prayer Wheel on the first floor. Inside the Prayer Wheel, it contains 156 billion microfilm of mantras. Lama Zopa Rinpoche has said by turning and circumambulating one round of the prayer wheel, it is equivalent to reciting the "Om mani padme hum" mantra 156 billion times, and it is especially beneficial to people who are sick, for example, those suffering from cancer. 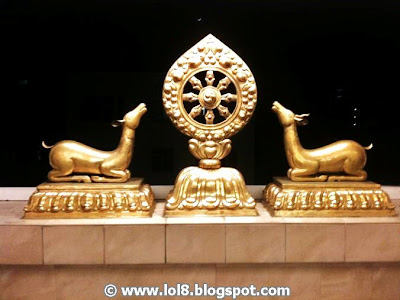 The highlight of the day to me was probably to have had the opportunity to go up and to view the 7th floor, the roof top where Rinpoche's room and garden is. It is usually only accessible to Rinpoche. He stays here whenever he is in Singapore. Here, on the roof top was the Dharmachakra (Wheel of Law or Transformation) flanked by deers. The wheel's motion is a metaphor for the rapid spiritual change engendered by the teachings of the Buddha. The Buddha's first discourse at the Deer Park in Sarnath is known as the "first turning of the wheel of dharma", and yesterday was the day Buddhists celebrate this auspicious day. 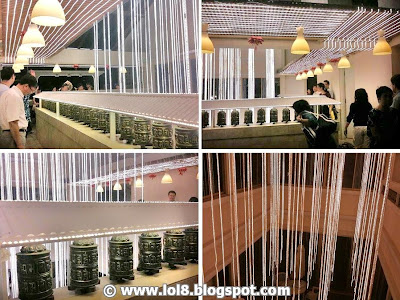 We viewed the 100,000 light offerings which Rinpoche has specifically instructed ABC to install earlier this year, so that we can make light offerings to the Buddhas 24/7. It was a spectacular beautiful sight, surrounded by many prayer wheels outside Rinpoche's room. Rinpoche's room is a sacred place, hence it is not open for public viewing. However, once a few months ago, just after Rinpoche left Singapore, I had the honour of visiting his room for a very brief moment. The energy of the room is incredibly awesome, it is as if one is in Pureland. 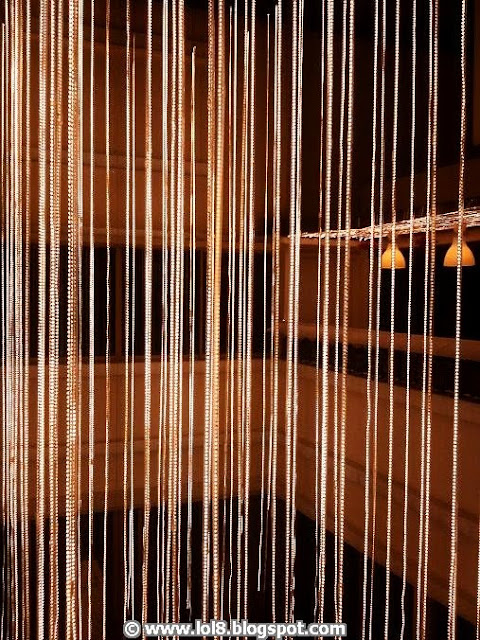 The 100,000 light offerings hanging from the roof top cascading down to the lower floors of ABC building. Awesome sight and highly significant and meritorious for ABC and its sponsors. Many thanks to ABC for the day's programs which benefited many people present and those not present whom the merits  were  dedicated to. May we rejoice in the merits jointly accumulated by our positive actions on this day!
Below is a newly uploaded video produced by the International Mahayana Institute in celebration of International Sangha Day 2010, which I saw last night from Lama Zopa Rinpoche FB Page.

Beautiful short video with brief shots of Rinpoche and his infectious laugh and numerous Sangha from FPMT. See if you can sight Rinpoche in the video as well as some Sangha/members from ABC. It is accompanied by a very nice upbeat song, Do It For Others.  Hope you had a virtuous day yesterday. _/\_

Cherish others. Care for others. Do it for others.
yours truly, STUMPBO @ 12:05 pm