Yippee! As of 11 Sept, just before midnight, I have completed recitations of 100 malas (10,800 mantras) of the Medicine Buddha 药师佛 mantra! Each mala is 108 mantras. 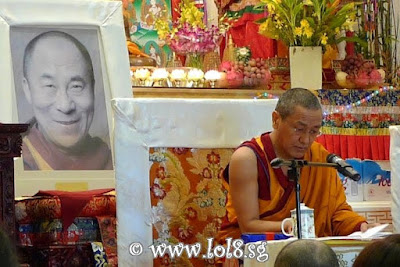 Just came back from 2 days of Medicine Buddha Meditation Retreat in ABC. In between teachings and sessions of meditations, we also did chanting, as a group and individually. I completed 65 malas for the 2 days. Here's a break down of my record:

As I have blogged earlier, I had pledged online to recite 30 malas to accumulate merits as well as for the flood victims in Pakistan. Starting 1 Sept till today, the daily recitations were slow and I only managed 15 malas. The Medicine Buddha mantra, "Tadyatha om bekanzay bekanzay maha bekanzay bekanzay raja samudgate svaha", is not exactly very short to recite fast.  A little of a tongue twister at times, my daily recitations were jerk-start attempts. However, today, after 2 days of retreat, I was able to recite the mantras faster and faster. Yes, it was like being empowered and blessed by the Medicine Buddha. It became very fast and smooth to recite the mantra.

I was so motivated by the total completed 80 malas after the retreat today, that tonight I further recited 20 more malas (in less than 3 hours), bringing to 100 malas!  It surpassed the 30 malas I had pledged online.  I did a personal dedication of merits to a long list of people, as well as to the victims of the recent natural disasters as well as the victims of the 9/11 attacks since today is the anniversary.  I think I will be able to accumulate more recitations by 17 Sept when Khen Rinpoche Lama Lhundrup will be leading a grand dedication  of the one million mantras target during Guru Puja. 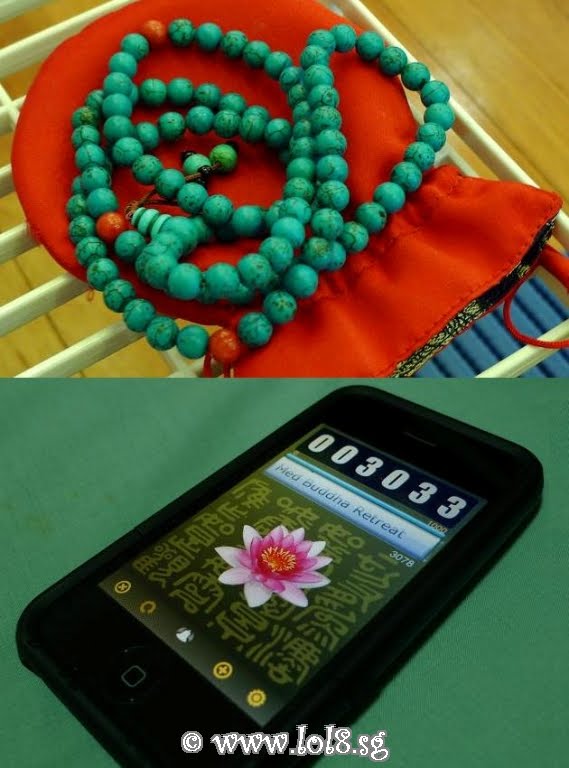 Instead of using the traditional mala beads here, I relied on an Iphone app called Buddha Counter to help me count the number of mantras chanted by tapping on the lotus flower after reciting each mantra. It is extremely useful so that I do not need to monitor the number of malas I have completed.

Below are photos from the Retreat, where we (tried to) remain silent for 2 days. No yakking nonsense except chanting and meditating. Great way to train and calm the mind. 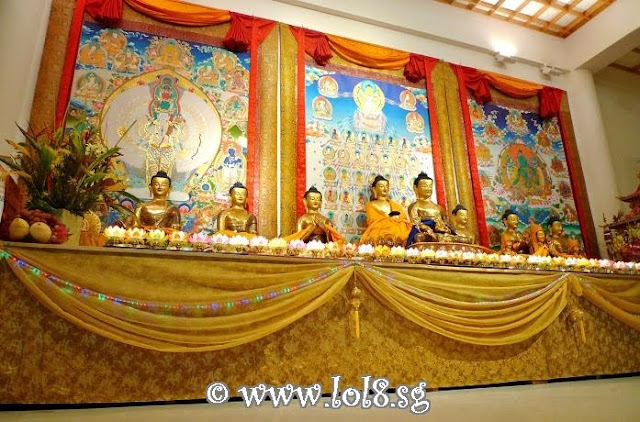 In the main gompa of ABC, all the Buddhas on the altar. 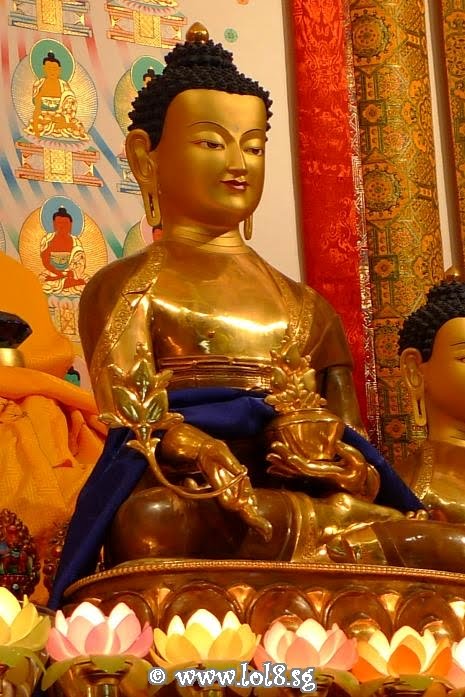 This is Guru Medicine Buddha. He is an emanation of Shakyamuni Buddha, who transformed himself into a blue Buddha to send out the healing rays of light and to give the medicine teaching to the fourfold assembly of Gods, Sages, Bodhisattvas, Arhats and Adepts etc. Thus the Buddha is depicted here as a physician because he diagnosed suffering and developed his teachings on liberation, or dharma, as medicine to escape from the cycle of rebirth. He saw himself as a physician, namely one who immediately healed the wound, in view of the patient, by asking about the cause of the injury. 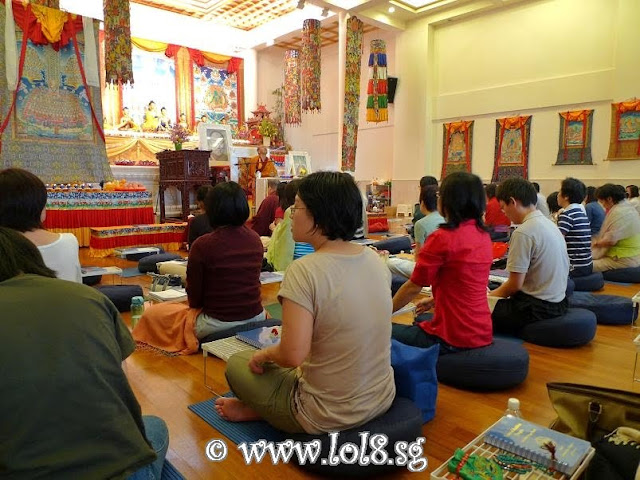 There was an attendance of more than 100 retreat participants. 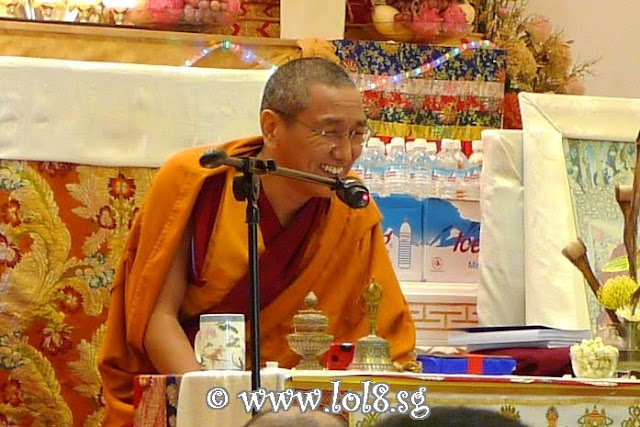 Resident teacher, Geshe Chonyi, who very kindly and ever patiently led us in meditation , prostrations and chanting. Geshe-la also gave brief teachings. Watch out for my coming post on Geshe-la's Story of the Ant and Lizard. 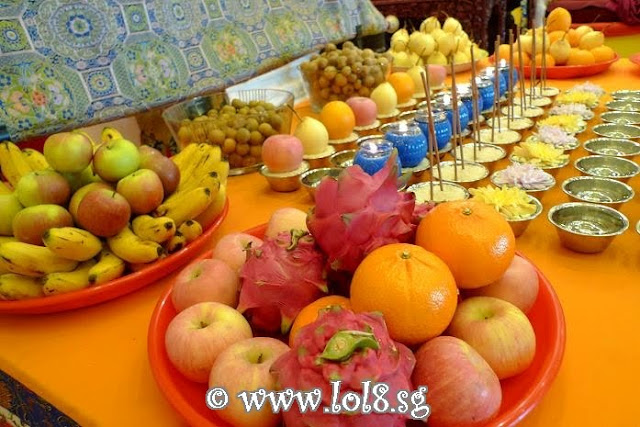 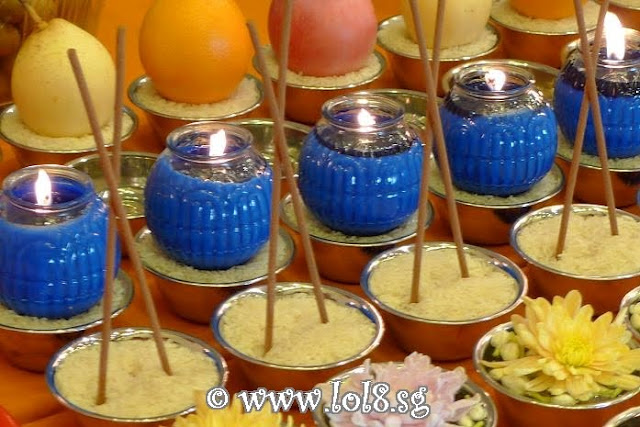 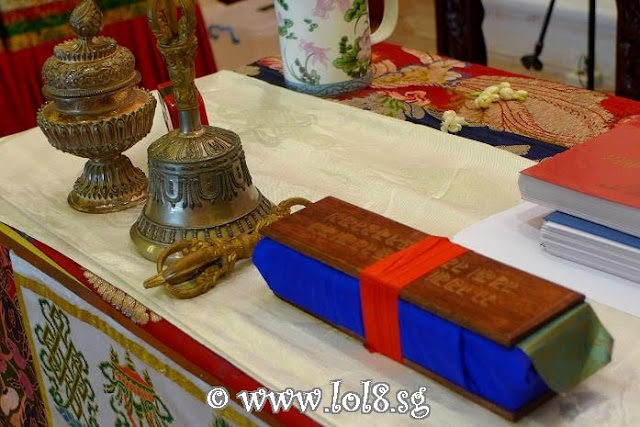 Geshe-la's dorje and bell, and the Medicine Buddha's holy text. 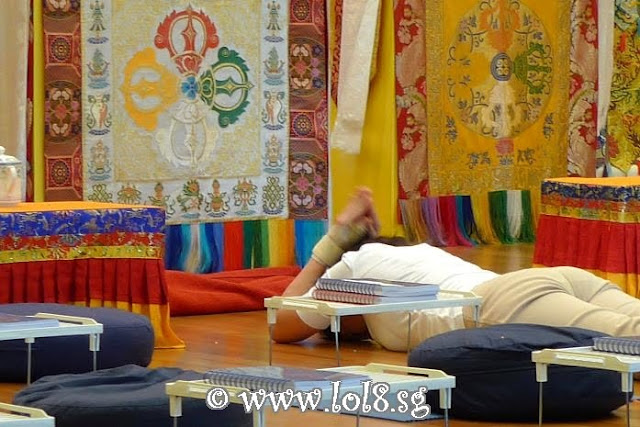 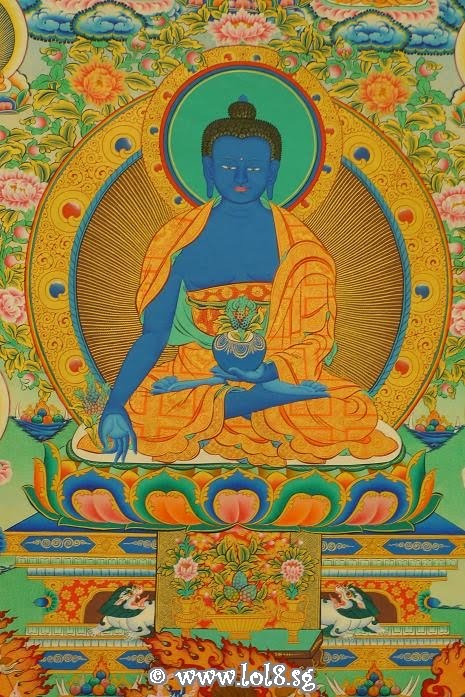 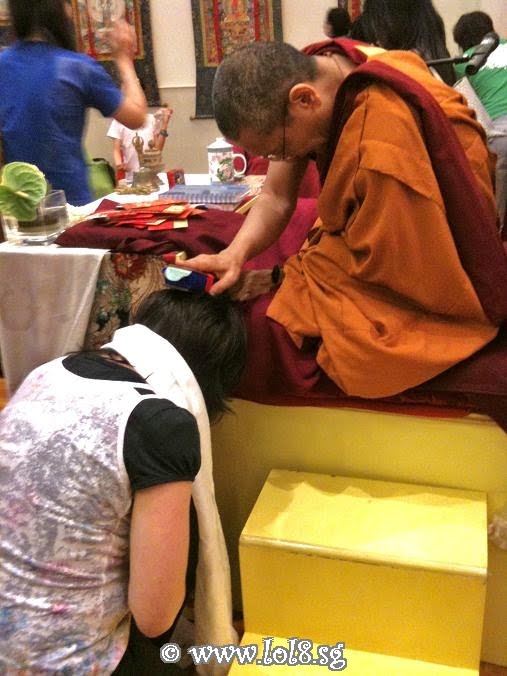 After the retreat, Geshe-la gave blessings to everyone. Thank you, Geshe-la! 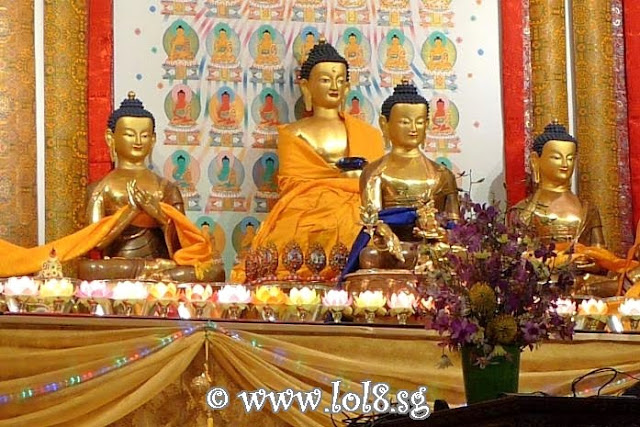 Zooming in on the Buddhas in the gompa. Shakyamuni Buddha (at center, fronted by the Medicine Buddha) gave the Medicine Buddha mantra and promised that those who supplicated the seven Medicine Buddhas and recited the mantra 8000 times would be freed from all obscurations formed by past deeds, would not be struck down by illness, would enjoy a long life with no untimely death, free from the harms of death, enemies, arguments, fighting and separation; and would not fall into the hands of oppressors and that all wishes would come true.

YAY, REJOICE!  Rejoice at the accumulative great group karma and ripened merits of all the participants and also those reciting at home. Want to know how karma becomes more powerful from an action when there are many people gathered together and why we dedicate our merits? Find out the answer from my precious guru, Lama Zopa Rinpoche here. 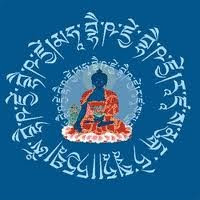