Just received great news that a few hours ago, my precious root guru, Lama Zopa Rinpoche, has received Mongolia's highest award for foreigners for distinguished service to Mongolia. Rinpoche received the Polar Star from the Mongolian President. It is the highest civilian award and rarely given to foreigners. 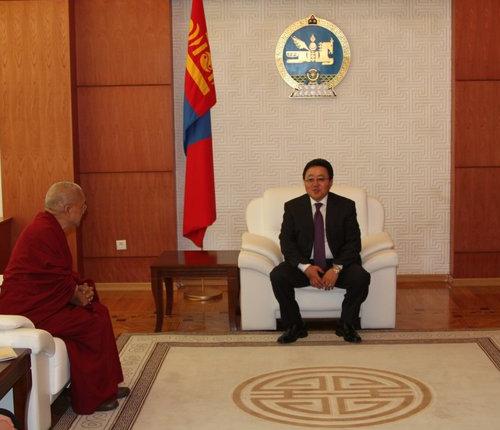 Rinpoche is only the second Tibetan lama to receive it - the first was Bakula Rinpoche - and it was giving in recognition of His activities of reviving Buddhism in Mongolia. Rinpoche is the Spiritual Director to the worldwide FPMT which is an organization devoted to the transmission of the Mahayana Buddhist tradition and values worldwide through teaching, meditation and community service. There are 157 FPMT centers, projects and services in 37 countries worldwide.

President of Mongolia presents the "Order of the Polar Star" Mongolia's highest award for foreigners for distinguished service to Mongolia.
Several months earlier, Khatanbaatar Choidogsuren, the director of our center here in Ulaanbaatar, Mongolia, on behalf of many of Rinpoche’s Mongolian students, requested the Mongolian Government to consider Rinpoche for this prestigious award (the highest that can be bestowed on a foreigner.) Yesterday, we suddenly received word that the President of Mongolia would bestow this honor on Rinpoche at 3 pm in the President’s office.

Rinpoche was congratulated outside Parliament House after the ceremony, Mongolian students were very excited!
Chenrezig (Kuan Yin) to spread this sutra all over Mongolia and the world. Rinpoche explained that he was presently giving the lung at Idgaa Choizinling College (the monastery that FPMT built) where a 1,000 people were attending. Rinpoche said he wanted to give the lung in different cities and towns all over Mongolia.

CONGRATULATIONS, RINPOCHE!!! May all your holy activities and projects be actualized immediately, with the blessings of Chenrezig! Om mani padme hung! _/\_