How to benefit your pet 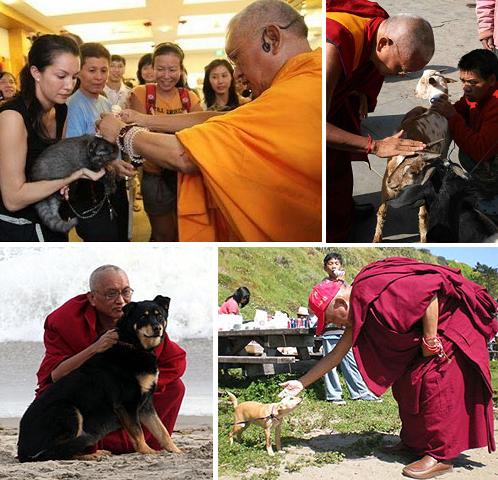 “If you love your animal very much, this is what you must do for them, for their good rebirth and quick liberation from samsara. When the animal is dying or has died, recite OM MANI PADME HUNG, Heruka mantra and Heruka root mantra, and other mantras such as the Milarepa and Namgyalma mantras. You can recite the long mantras 21 times or more, and one mala or more of the short mantras. Blow strongly on the animal’s body after each recitation. Or, you can blow on water, visualizing each deity absorbed into the water. Each drop of water now has the power to purify negative karmas. Then, as you pour the water on the animal, all its negative karmas are purified.

When the animal is in the process of dying or even after its breath has stopped, if you have some sand from a Kalachakra sand mandala, you can mix it with butter and put it on the crown of the animal’s head. Each sand grain has many Buddhas abiding in it. It’s especially good if it has been blessed by His Holiness the Dalai Lama”.

Lama Zopa Rinpoche is well known for saving the lives of animals. His Holiness the Dalai Lama had this to say about Rinpoche recently: “Rinpoche is someone who follows my guidance sincerely, very expansively and with one hundred percent trust. He possesses unwavering faith and pure samaya; not only has he pure samaya and faith, but whatever I instruct, Zopa Rinpoche has the capability to accomplish it. So whatever dedications Lama Zopa Rinpoche makes, I also pray to accomplish this and you should do the same thing”.

Here is the link to the mantras Lama Zopa Rinpoche mentioned above.

This is a clip of Rinpoche reciting Maitreya Buddha mantra and blessing his own dog, Uma Jangsem.  A very lucky dog!