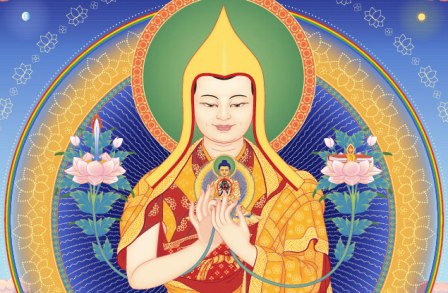 In the Tibetan Gelug tradition, today we celebrate 'Lama Tsongkhapa Day' and remember the immense kindness of this great Bodhisattva.

Lama Tsongkhapa (1357-1419) is one of the most significant Tibetan Buddhist masters, whose studies and meditations in all the major schools of Tibetan Buddhism resulted in the founding of the Gelugpa lineage. His influence in the Buddhist world is nothing short of extraordinary and much of the teachings being propagated today would not have been possible without his tremendous teachings and kindness for all beings. Often known as the Second Buddha, his teachings and legacy are second only to the original sage Buddha Shakyamuni.

Buddha Shakyamuni himself prophesied Tsongkhapa’s birth and attainments, he who is an emanation of Avalokiteshvara, Manjushri, and Vajrapani:

After I pass away
And my pure doctrine is absent,
You will appear as an ordinary being,
Performing the deeds of a Buddha
And establishing the Joyful Land, the great Protector,
In the Land of the Snows.

While I was on a tour to Beijing about 15 years ago, I visited one of the attractions which was the Lama Temple (Yong He Gong). I chanced upon the statue of Lama Tsongkhapa, bowed to him as a form of respect, made some offerings and that was it. I did not even know who he was. Little did I realised that a decade later, I would become a Tibetan Buddhist following the Gelugpa tradition, where I would receive authentic teachings passed down from Lama Tsongkhapa which originated from Buddha Shakyamuni's time. It was only a decade later in 2005 that I realised I had already made that affinity /connection with Lama Tsongkhapa from that fateful Beijing trip in 1995.

Although he was an enlightened being, Lama Tsongkhapa did not reveal himself to be a special being but always appeared in the aspect of an ordinary practitioner. In particular he never made a public display of his miracle powers or clairvoyance. Instead, Lama Tsongkhapa mainly worked to establish pure Buddhadharma throughout Tibet. By giving teachings and showing a good example he led many beings to gain pure, authentic realizations of Sutra and Tantra.

In my prayers or otherwise, I have always ask to be able to go to Tushita Pureland after I pass on. It is Buddha Maitreya's Pure Land. It is known as "Tushita" in Sanskrit or "Ganden" in Tibetan, which is where Lama Tsongkhapa went after he passed away. During his life Lama Tsongkhapa established a great monastery in Tibet called "Ganden Monastery" (the existing Gaden Monastery today) and he spread throughout Tibet a pure Buddhadharma that comes from Manjushri's wisdom, which protects all living beings from the ocean of samsaric suffering. All of this indicates that Lama Tsongkhapa is a manifestation of Buddha Maitreya, (the Coming Buddha) who is the Protector of the hundreds of Deities of the Joyful Land. Hence the tradition of Lama Tsongkhapa is known as the "Gelug", and his followers are known as "Gelugpas"; the original name of "Ganden" came from Buddha Shakyamuni.

That we need is not displays of miracle powers but a clear example of how to enter an unmistaken spiritual path, how to practice that path comfortably and smoothly, and how to complete it successfully. This is the actual method for solving our daily problems. Since Lama Tsongkhapa provided us with just such an example, we should recognize his immense kindness and develop unchanging faith and respect for him.

Lama Tsongkhapa passed away on the 25th of the 10th lunar month in 1419 and achieved enlightenment in the intermediate state. Traditionally, prayers and extensive light offerings are made to commemorate his passing into Parinirvana which falls on November 30 this year.  Amitabha Buddhist Centre is organizing the below events to celebrate today:

As advised by Lama Zopa Rinpoche, "it is best to offer as many light offerings as you can. It is very common to offer lights on Lama Tsongkhapa day...". Read more about Rinpoche's advice for practice on this day, click here.
yours truly, STUMPBO @ 12:00 am