Can the power of compassion cure disease?

Yueheng, a Dharma brother and fellow blogger of Buddhist blog, The Refugee, mentioned an article he read, titled Can Meditation Cure Disease? It was about doctors in New York University studying the brain of a Tibetan monk who reportedly cured his gangrene-stricken leg solely through meditation for a year. 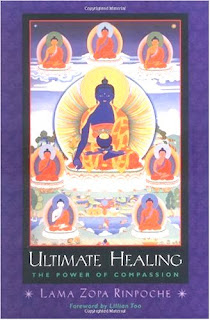 This brings to mind a wonderful book written by my guru, Lama Zopa Rinpoche, titled "Ultimate Healing - The Power of Compassion".  In the book, Rinpoche tells of many life stories of people who have recovered from disease through meditation, and he addresses the central role played by karma and by the mental habit of "labeling" in causing illness. At the same time, Rinpoche helps us to recognise the real root of illness and shows how meditation and other techniques for developing compassion and insight can eliminate the ultimate cause of all diseases.
I would like to highlight one particular chapter about "Miracle Cures". Rinpoche said that in Malaysia, Singapore and America, he has met many healers with stories of miracle cures. A person's ability to perform miracle cures has nothing to do with external material phenomena. Their healing power generally comes from their own good heart, and there is not egotism involved, they cherish others more than themselves.
Lama Zopa Rinpoche mentioned a Chinese businessman in Malaysia by the name of Tony Wong who is a devoted Buddhist and whose life is filled with many stories of miracle cures. He uses his office to conduct his healing rituals. Each weekend his office would be packed with people. Tony simply places a jar of water on the altar in front of the statue of Kuan Yin (the female aspect of the Buddha of Compassion). Then he leads in 3-4 hours of continuous chanting of the Kuan Yin's mantra.
When Rinpoche asks Tony if he did any special visualisation or meditation, Tony said he did not do anything at all; just place the water and lead in the chanting. After chanting, he distributes the water. Both he and his patients have strong faith that the water has been blessed, though those cured are not necessarily Buddhist. Tony tells many stories of seriously ill people who immediately start to feel better after chanting the mantra and drinking the water. Some even recover completely by the next day. Someone with cancer will come in one day supported by two people because they are unable to walk. The next day, after drinking the blessed water, the person will walk into the office unassisted. Tony has witnessed many such miracle cures.
Rinpoche wrote, "How do these miracles happen even though no special meditation is done? One factor is the power of Tony's mind. Tony himself is a very sincere and compassionate person who dedicates his whole life to serving others. He never refuses his help to anyone who asks for it, but tries to do what he can to help others. This is his spiritual practice. Another factor is his faith. He has strong faith that the water is blessed simply by being placed in front of the Kuan Yin statue. Much of the healing power comes from the faith in his mind and in the minds of the people who drink the water."
Water or another substance can be blessed, pure and powerful but the actualizing of its healing power depends on the person who gives the water and on the person who drinks it. Basically its healing power depends on the mind; the mind has to make it work. Even though we like to believe in external healing power, there is no such thing; all the healing power comes from our mind, mainly from our faith. This is the case with Tony Wong, where no special visualisation is done to bless the water, yet there have been many miraculous recoveries from illness. The individual's mind, especially the positive thought of faith, creates the blessing.  It is a dependent arising.
While some people can be healed by drinking blessed water or taking other blessed substances, doing meditation, reciting mantras, or using conventional medical treatment, others cannot be helped by these simple means, because they have heavy obstacles. Even if a doctor accurately diagnoses a disease and prescribes what should be the correct treatment, there is no guarantee that the person will recover. The treatment will not work if the person has many heavy obstacles. The person will have to put some effort into doing some purification practice. Only then can there be a cure. 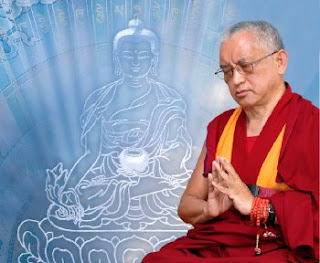 Rinpoche related another example of his uncle, who for many years could not sleep because he was in so much pain. He tossed and turned all night. Even though he went to Tibet and consulted many doctors, nothing helped. Finally he met a meditator who lived in a cave near Lawudo Cave. The meditator used divination to check Rinpoche's uncle's condition and then advised him that his disease was karmic. Of course disease and every other problem that we experience is the result of our own negative karma, but the meditator meant that in Rinpoche's case, simply taking medicine would not be sufficient to cure the problem and that he would need to do some practice of purification. He advised his uncle to recite hundreds of thousands of Vajrasattva 金刚萨埵 mantra, a particular aspect of Buddha that brings powerful purification, and to do hundreds of thousands of prostrations. Just as doctors specialize in a particular field - a cardologist specializes in curing heart problems - different Buddhas have special functions; Vajrasattva specializes in purification. The practices of Vajrasattva and prostrations were recommended to enable Rinpoche's uncle to purify the actual cause of his disease, his past negative actions and the imprints left by them on his mind. Purifying the mind purifies physical disease because physical problems come from the mind. Rinpoche said his uncle started doing the practices for 6-7 years. His condition started to improve, and he gradually became healthier and healthier. In the end he recovered completely.
Even though medicine or blessed substances generally benefit people, they do not work with certain individuals whose heavy obstacles prevent recovery. Those who cannot be cured through such simple means have to use other methods, such as meditation or purification practices. After they do some practice, the recommended medicine is often able to work.
There are also many cases where taking what should be the correct medicine for a particular disease causes the person to contract a new disease or to experience unpleasant side effects, such as fever. Rather than curing the disease, the medicine makes it worse. Of course, in addition to the person's attitude and actions, external conditions such as diet, climate, and spirits can affect the course of an illness. Spirits can interfere by not allowing medicine to work. Certain pujas and meditation practices then need to be done to pacify the spirits and once these are done, the medicine is able to work.
While some people can experience miracle cures simply by meeting or touching a great healer, not everyone can meet such a healer, and it is important to understand the reason for this. Those with great obstacles must do something to purify their mind, the real cause of their physical problems; someone simply touching or speaking to them will not be enough to heal them. This is why it is essential to practice meditation and purification. In this way we become the healer of our own mind and body.
We experience illness on a physical level,
but in order to be healed,
we must understand
where true healing begins;
within our hearts and minds.
On Lama Zopa Rinpoche's coming visit to Amitabha Buddhist Centre during the CNY, he will be bestowing the Medicine Buddha initiation on 5 and 6 Feb 2011. Making a connection with the Medicine Buddha, practicing meditation and reciting his mantra or even just saying his name, helps us achieve our potential for ultimate healing.
The Medicine Buddha mantra is held to be extremely powerful for healing of illnesses and purification of negative karma. The practice of Medicine Buddha is not only a very powerful method for healing and increasing healing powers both for oneself and others, but also for overcoming the inner sickness of attachment, hatred, and ignorance, thus to meditate on the Medicine Buddha can help decrease physical and mental illness and suffering.
Medicine Budhha's mantra
Tayata om bekandzay bekandzay maha bekandzay bekandzay radza samugate soha

By the way, today is the 1st of the 12th lunar month. It is also the solar eclipse where merits are multiplied by 100 million times. Please be mindful of all actions. May everyone who read this post be healed of any illness, suffering, pain and mental anguish.