Until one has loved an animal, a part of one's soul remains unawakened

I have participated in a number of animal liberation exercises for the past few years, organised by different buddhist organisations such as Kong Meng San Phor Kark See Monastery and Amitabha Buddhist Centre.  ABC conducts animal liberation on a regular basis; once a month and on many special dates. Usually we offer prayers at the centre for the animals (which are in a truck) and have them circumambulated 3 times around the centre which has many holy objects, and then they would be driven out to sea on a boat for release. 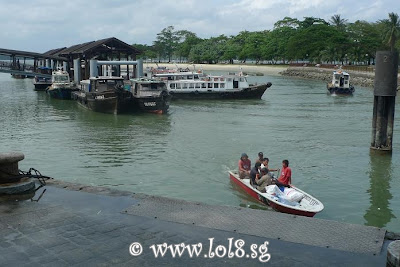 A couple of days ago on a late afternoon of 4 Jan, it is the solar eclipse of the sun. On this special day, I went out to sea for the animal liberation at Changi Ferry Point.
Both solar and lunar eclipses are important days in a practitioner's life. There are powerful forces at work during this time, and a skillful practitioner can take this opportunity to bring much benefit through their Dharma practice.
According to tantric Buddhist cosmology, the energies that are lost during eclipses, cannot be recovered. Every time there is an eclipse, there is a gradual diminishment of energy on the planet. Over the course of decades and centuries, this gradual decreasing of energy is what is known as 'the degenerate age.' This manifests as the gradual lessening of the power of the five elements - food and herbs loose their potency, there is less oxygen in the atmosphere, diseases and pollution increase, there is a worsening of natural disasters and suffering. This process of elemental degeneration is largely created as a result of these continual cycles of eclipses, until finally we reach the end of the kalpa when only one element predominates and consumes what is left.

For this reason, in the Buddhist tradition, much emphasis is placed on engaging in Dharma practice on these days. By generating merit and reciting prayers, we can lessen the overall diminishment of energy and slow down the process of degeneration. We can help to preserve the continuity of the elemental energies, and by doing so, it may be possible to save the lives of those beings who may die as a result of the stress caused by the eclipse. Lama Zopa Rinpoche says that during a solar eclipse the effects of positive and negative actions are multiplied by 100 million times. What this means is that if you engage in virtuous practice it will be more helpful than usual. However, if you engage in non-virtue, it will further the process of degeneration.

Thus the merit of practice is greatly multiplied during an eclipse. 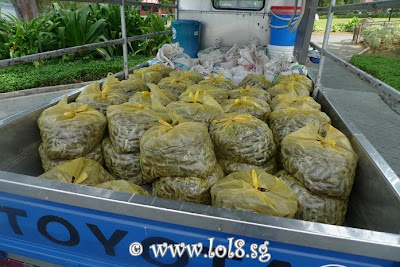 At Changi Ferry Point, the whole truck which consists of about 70,000 shell fish, la la, mussels, and chut chut, has already arrived. Animals cannot hear mantras, but all we have to do to liberate them is to circumambulate them around a holy object, even without the motivation, that is all. Just by seeing, hearing, touching, or thinking about any holy object, one can be liberated from all negative karma and suffering. This means that as we circumambulate with the animal, we are offering them the body of a happy transmigrator in their next life, and a happy rebirth. Not only that, but we are giving them the opportunity to practice Dharma in their next life, which is the most important thing: to have a better rebirth to be able to accomplish the path, eliminate defilements, and achieve enlightenment. 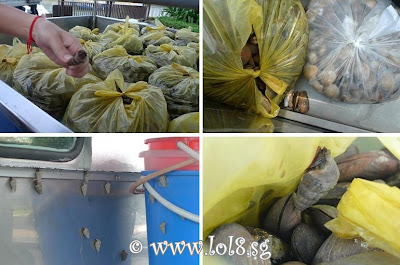 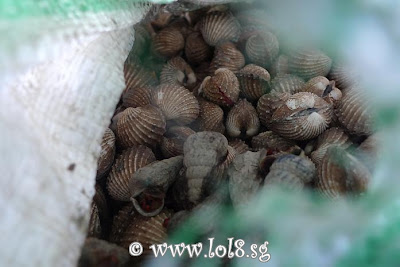 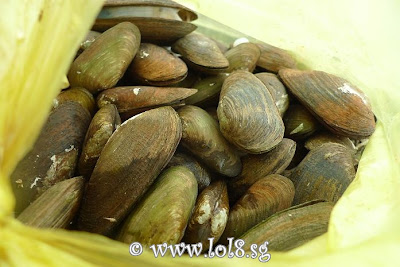 I managed to have a closer look at the sea creatures in the truck while waiting for the others to arrive. The chut chut were quite active and had in fact escaped out of the plastic bags  and had climbed onto the interior of the truck. I had earlier on bought a bottle of mineral water, spent some time chanting thousands of Kuan Yin and Medicine Buddha's mantras and blown them into the water. This water I used to sprinkle onto these sea creatures to bless them. The guys loading the tons and tons of sea creatures onto the boat from the truck. 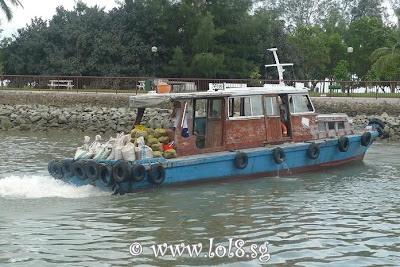 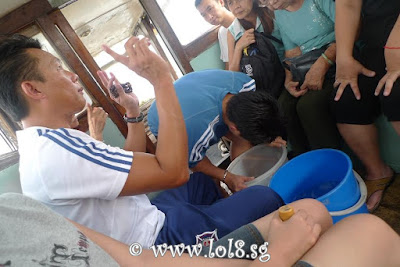 Fred has been leading in the liberation of animals for many years and to date billions of lives have been liberated.  Before the release, we generated the motivation, and said prayers and chanted many different mantras, and blew onto the water in the pails collectively.  The water was to be mixed with the sea water, and used to bless the sea creatures before they were released. 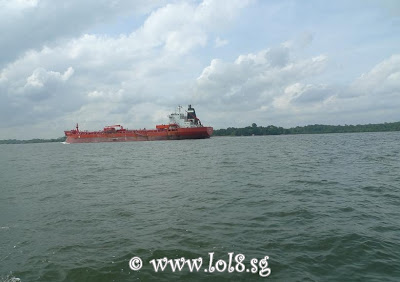 At a certain point we stopped the boat, and started the liberation. 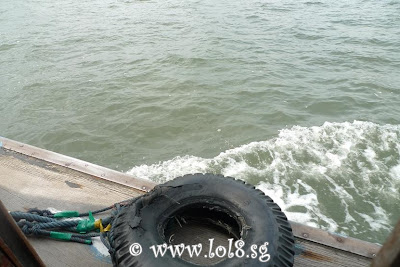 I did not take any photos as we were all busy releasing the chut chut, la la, and hum into the sea. After that we also did our dedications to the liberated animals' good rebirth, as well as the long lives of all our gurus, especially for Khen Rinpoche Lama Lhundrup who is manifesting an illness.  That day we liberated 70,000 lives. Technically speaking, if we multiply the merits by 100 million times, we have liberated 7000 billions of lives! By contributing, for example, just $10, the merits were equivalent to $ 1 billion ! 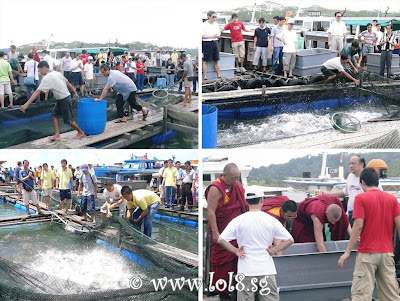 Here is one of the previous larger scale animal liberation I attended in 2005 organised by another buddhist organisation. At that time it was releasing fishes and crabs and bigger sea creatures. We went straight to the kelong where the fishes had been caught, purchased them and brought them further out to sea for release. I was there with my friend, and my godbrother with his friend. There were many of us in a few bumboats, accompanying a Geshe-la and his 2 assistants.  He was Geshe Gyurmey Lobsang Delek. We called him Lama Gyurmey then. It was his first teaching trip in Singapore. 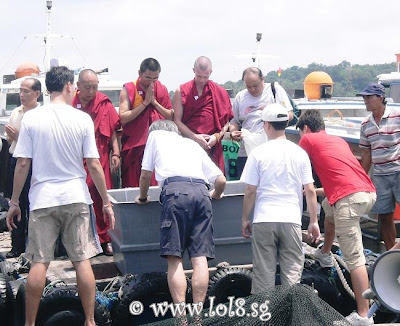 At the kelong, Lama Gyurmey and his monks recited prayers for all the fishes, batches by batches, under the hot noon sun. He blew onto bottles and bottles of water to be poured onto the fishes, as well as blessed them directly. 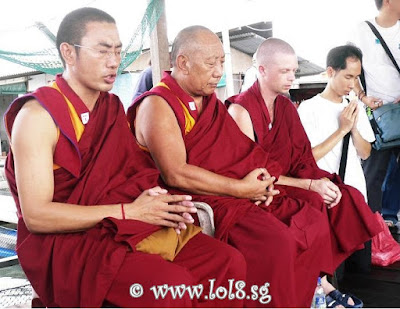 It is always a touching sight to see learned lamas and high practitioners, engaging in prayers, doing their utmost best to liberate the animals for a better rebirth. 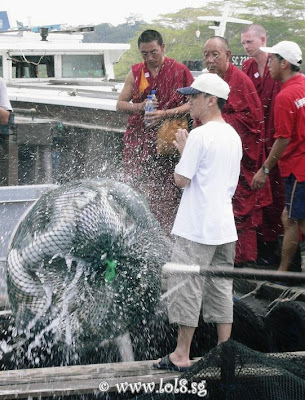 I personally like this shot alot. There were many many huge fishes while  Lama Gyurmey looked on in meditative moments. 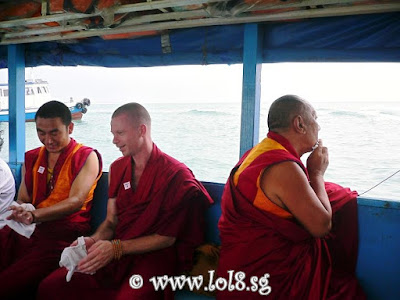 Then we went out to sea to release all the fishes. There were many of us in a few bum boats. I was fortunate to be sitting with Lama Gyurmey in the same boat, he was right in front of me. I witnessed his dedicated concentration and sincere prayers for the fishes and the creatures in the sea throughout the whole journey. He was deep in prayers and meditation while gazing out at sea even after the fishes were liberated. Here is a photo which I took of Lama Gyurmey with my godbrother. My godbrother has a special affinity with Lama Gyurmey. He likes and respects this lama alot.  My godbrother has since went on many many animal liberation trips on his own, always enthusiastic and busy helping out carrying the heavy loads of fishes on the boat. Once his friend also accompanied us. What is admirable about his friend is that this young man is a full time vegetarian. 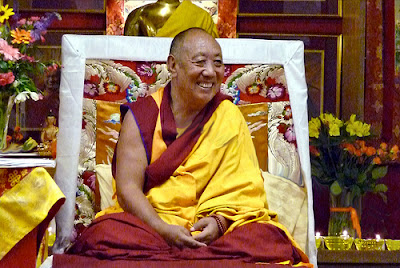 Lama Gyurmey bestowed on me my first Green Tara initiation. From what I learnt, Geshe Lama Gyurmey is now known as Gyurmey Khensur Rinpoche Jetsun Lobsang Delek, who went on to become the Abbot of Gyumed Tantric College. He is one of the esteemed teachers in the Gelugpa tradition, being the teacher of thousands of students, including several important reincarnate Masters. He is also one of the foremost teachers of the "Five Major Texts" at Sera Jey Monastic University in southern India. I hope to meet him again one day. 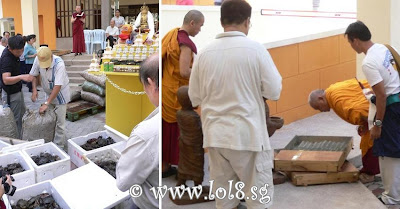 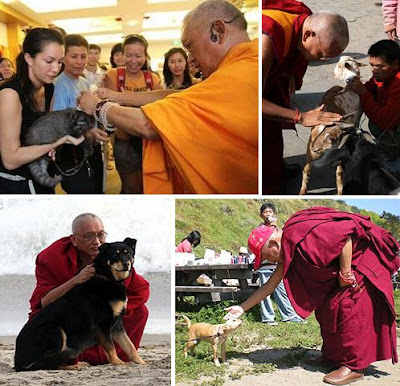 Just last year, when Lama Zopa Rinpoche was here, besides liberating the sea creatures before their release with extensive prayers, he also blessed all the dogs, cats, turtles, hamsters, guinea pigs and any pets that have been brought to the centre for the animal liberation with a stupa of holy relics.


Animal liberation is not just a practice of buying animals and releasing them. We need to perform practices to benefit the animals. We should rejoice for these animals and generate the bodhicitta and compassion for them, as these animals, being born in the lower realms, could have been our parents or someone close to us since beginningless times. If we circumambulate the animals around holy objects and bless them with mantras and prayers, we are creating the condition for their good rebirth in their next life as humans. This in turn, plants the seeds for them to meet the Dharma, liberates them from samsara, attains happiness in future lives, and to actualise the path to enlightenment. This is a most amazing benefit that we can offer to other beings. At the same time, animal liberation also causes those of us who liberate lives to have long lives.
You may be interested in my past entries on liberating lives:
-  How to benefit your pets
-  And everywhere he went, they came in droves
-  When a dog is luckier than a human
-  80,000,000 lives
-  What if you are a fly....
-  Did 100 million times!
yours truly, STUMPBO @ 2:56 pm