G.U.R.U. from your side, not from his side

Just an excerpt of a teaching from my guru, Lama Zopa Rinpoche, on the importance of a guru. 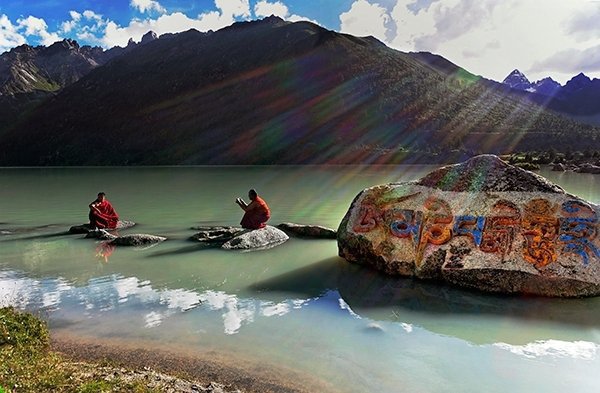 Another way to look at this situation is that although in reality there is no mistake on the guru’s part, nevertheless we see mistakes according to our karma. The guru shows mistakes because we only have the karma to see this manifestation at this moment, and nothing else.
In this matter, that aspect becomes most precious and important for us, for our minds. As it is mentioned by Gyalwa Ensapa, “Until one becomes separated from evil karmic obscurations, even if all the Buddhas without exception directly descend in front of one, one will not have the fortune to see the supreme holy body, adorned with the holy signs and exemplifications, but rather only the present appearance (the ordinary view). ”
Even if a guru kills another guru or kills many millions of people, as Hitler or Mao did, since one has made a connection with him or her, one should never lose faith from one’s own side. Unless from his or her side the virtuous friend tells you, “Now I am no longer your guru. You should not follow me anymore,” unless he gives this permission, one must not give up one’s faith in that teacher.
One time, after I had listened for three days to one person’s teachings, that person told me not to follow him. The bodhisattva Khunu Lama later explained to me that it was acceptable not to follow that person, but important not to criticize, to keep the mind in equanimity regarding him.
It is said in the tantric teachings, “If one thinks one’s own guru is bad-tempered, one will be reborn in the hell realms for 60 eons.” If one does not cultivate devotion after one has made a Dharma connection – which means having received teachings with the recognition of guru and disciple – then it is said in the teachings that one will be reborn as a dog one hundred times, and then be reborn in a lower caste – or, as His Holiness Zong Rinpoche mentioned, as a scorpion. This applies even if there are no negative thoughts arising toward the guru, such as heresy or anger, but one still does not develop devotion and follow the teacher after listening to even just one stanza, even if one no longer regards that teacher as one’s guru or forgets one’s guru-disciple relation.
The conclusion is that both ways of looking at the situation with the guru are correct, because there is a purpose to both: that is, to benefit others. These ways of thinking are what protect our mind from the heaviest karma.
yours truly, STUMPBO @ 9:26 am