The grey elephant running wild is you

Such a cute elephant sighted in Raffles Place the other day I was there. There were a few elephants in different designs and postures lying around. I think it brightened the dreary working place up a bit. 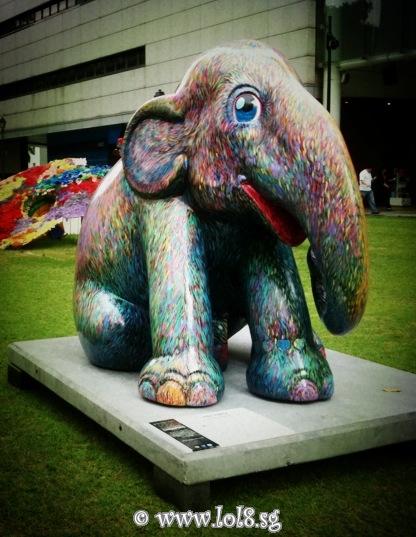 This cheery looking grey elephant sitting down is my favourite. 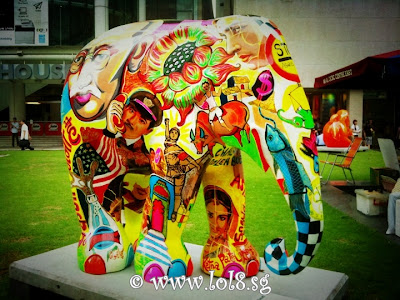 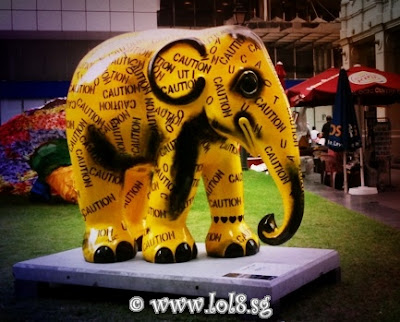 Elephant passing by.... proceed with CAUTION.

In Buddhism, the elephant is a symbol of mental strength. At the beginning of one's practice, the uncontrolled mind is symbolised by a grey elephant who can run wild any moment and destroy everything on his way. After practising dharma and taming one's mind, the mind which is now brought under control is symbolised by a white elephant strong and powerful, who can be directed wherever one wishes and destroy all the obstacles on his way.

In Buddhist iconography we find the elephant-faced deity Gangpati or Ganesh as an emanation of the bodhisattva Avalokitesvara (Kuan Yin). Also in another aspect, representing the worldly aspect of the same evergy he is trampled upon by same other deities such as Mahakala, Vajra Bhairava and others.

In the mandala offering ritual, one offers to the Buddha the Precious Elephant, with the strength of one thousand elephants and who can circumambulate the whole universe three times in one day. Also the elephant tusks are one of the Seven Royal Emblems.

The elephant is the vehicle of Buddha Akshobhya and the deity Balabadra. The elephant also appears as a guardian of the temples and of Buddha himself.
yours truly, STUMPBO @ 9:11 am