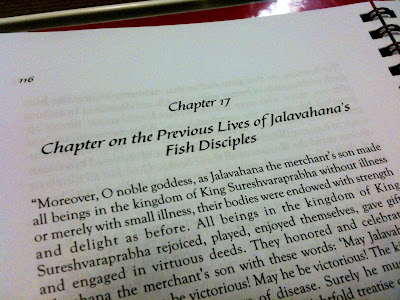 I am very amazed that no matter how many times I recite this sutra, it is always when we reached Chapter 17, the chapter about the "Previous Lives of Jalavahana's 10,000 Fish Disciples", that I would very touched and my hair on my arms would began to stand, my spine, neck and ears were burning hot. I previously blogged about this during different occasions, here and here.

It was the story of how 10,000 fishes were saved by a compassionate Jalavahana, a merchant's son, from a drying lake, as well as from flesh-eating animals and vultures. He not only tried to find food for the 10,000 hungry fishes, he also expounded the Dharma to them. As a result, although the 10,000 fishes eventually died, from the animal realm, they were reborn as Gods of the Thirty-Three, due to the virtuous bodhisattava act of the compassionate Jalavahana. He was the Buddha in one of his past lives.

I am still very dumbfounded about this.  Why in this particular chapter that my hair will be standing? And not another chapter which is supposedly even more touching and heart-breaking.  I wish I know why and how.
yours truly, STUMPBO @ 12:25 pm