Tears of an elephant named Bodhicitta

Venerable Thubten Pema just shared a touching short clip on the Facebook page of Milarepa Center (an affiliate of FPMT) in Vermont USA. I captured some screenshots here. 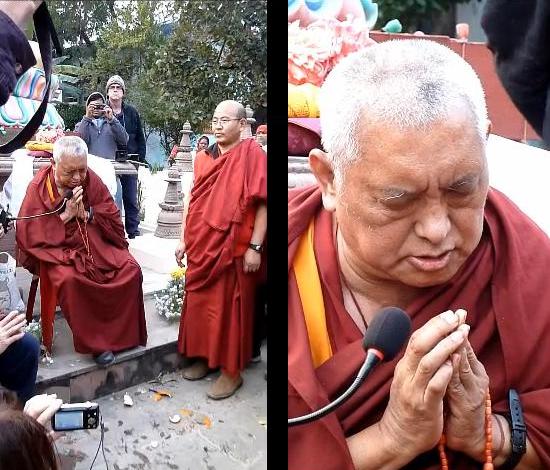 My dearest precious guru, Kyabje Lama Zopa Rinpoche was chanting 'om mani padme hum' to one of the elephants at the center.  Rinpoche has recently named the elephant "Bodhicitta".  While Rinpoche was chanting, this big hearted elephant began to give one of the ladies nearby wet trunk kisses.  Then within a few seconds later, Bodhicitta the elephant began to shed tears, obviously moved by Lama Zopa Rinpoche's blessed chants.  What a blessed elephant.  Watch the clip here. It was so moving. Om mani padme hum! 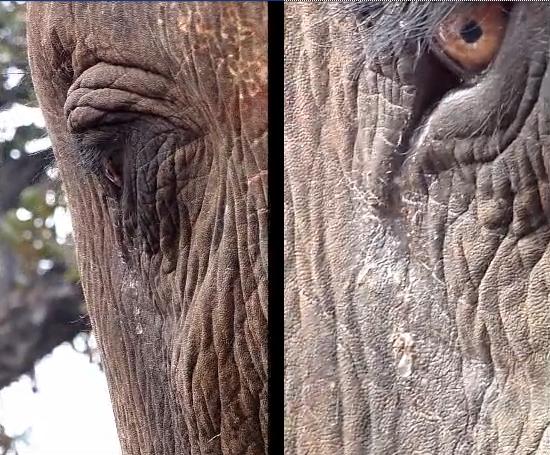 Lama Zopa Rinpoche is known for his great compassion and kindness towards animals and the practice of liberating them. He said that reciting prayers into the ears of animals will plant the seed of all the realizations of the path to enlightenment. This has inconceivable and unbelievable result. This gives the animals a good rebirth in their next life, to be born as a human being and to meet the Dharma.

There is a story when the Buddha gave teachings to 500 swans in the field and the next life they were born as human beings, became monks, and they all became Aryan beings, able to achieve the cessation of suffering and the true path. So the result is unbelievable, just by hearing Dharma words.

Lama Zopa Rinpoche also mentioned that in order to benefit animals, it is useful to circumambulate them around holy objects, for example, around a stupa. Many animals cannot hear mantras but all we have to do to liberate them is circumambulate them around a holy object, even without the motivation - that is all. There are inconceivable benefits of stupas and specifically of the four Dharmakaya relic mantras. 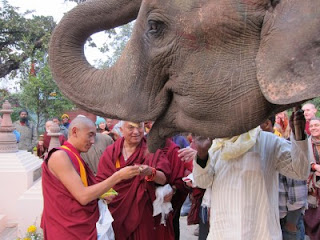 Rinpoche also told another story of the power of holy objects. There was one leaf that had seven insects on it. It was blown by the wind and circumambulated three times a Vairochana statue that was near the ocean. Then the insects died. They were reborn as seven lower caste girls. Then in their next life, they were reborn as seven daughters of King Titi. They made offerings to Kasyapa Buddha and received prediction of their enlightenment. This shows how karma works.

Another example was a pig which was being chased by a dog. Somehow they ran around a stupa, so that became a circumambulation. Then the pig died and was reborn in Tushita Pureland.

Hence the benefits of reciting mantras to animals and circumambulating them around holy objects are unbelievable.