This Wheel of the Meritorious Elephant Generating Power is compiled as instructed by my guru, Lama Zopa Rinpoche. It has been newly produced, put together and digitized by Venerable Thubten Khedub Sherpa and Venerable Lhundub Gyaltsen Sherpa.

It is now printed and released for sponsorship in the FPMT online store, available in the card form and wallet. I love it because it originates from Guru Rinpoche, the great Padmasambhava 莲花生大师 and I deeply love and respect him! 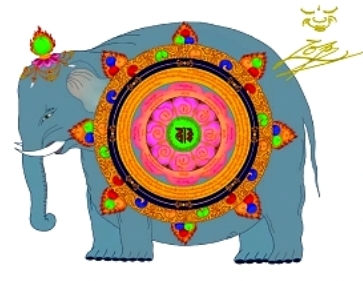 Apparently, this Wheel of the Meritorious Elephant Generating Power was arranged by several tertöns (realized masters who reveal hidden teachings) and is a response to a request from King Trisong Detsen to Guru Padmasambhava.

The benefits accorded to this Wheel include accomplishment of all activities as well as the increase and multiplication of life, merit, wealth, power of influence, fame and all positive and good qualities. Likewise, all desired things of the external world and its inhabitants, both animate and inanimate, come under one's control according to one's wishes.

However, please note that Lama Zopa Rinpoche has made it clear that this is not for one's altar - not something you take refuge in - but it is for one's office or place of business to bring about success.

The legend of the Wheel of the Meritorious Elephant Generating Power goes like this....

King Trisong Detsen, one of the three Dharma Kings who established Buddhism in Tibet, respectfully with prostration, requested thus to Orgen Arisen from a Lotus (Guru Padmasambhava):

“Oh Venerable Guru Rinpoche, in order to implement the law of the Kingdom [of Tibet] according to Dharma and make it governable from the center to the outskirts without exception to have merits blazing like fire. By all means, please bestow upon me an instruction from the heart, a secret among all the secrets.”


Having made this request, Guru Rinpoche sat in meditation for a brief moment and then gave this oral transmission - a yellow scroll that was hidden in the pillar of Monbumthang, at Chimpu Mountain, [the place] of five hermitages. At the end of the Year of the Male Dog, Drog Tonchung took the treasure out from there and it is still in use. It is extremely profound.


As it is mentioned in the Precious Treasure Teaching on the Three-fold Tertons - Ajo Palpo of Jukhar, Dre Sherab Bar and Nyalpa Nyima Sengge – these 3 tertons approached one another to compile the instructions for the Profound Wheel of the Meritorious Elephant Generating Power, which is based strictly on some old notes of oral advice. Their intention was, thus, to put [the advice together] purely and clearly. This wheel can be placed on the golden throne of stupas and such, inside a treasure house, or at the heart of a treasure vase. This has been observed as, traditionally, what is done.


Many inconceivable benefits are found.