I read an article written by Owen Cole in Mandala Publications April 1990 where a student of Lama Zopa Rinpoche, Elea Redel, discusses how she learned from her guru to bring chronic pain and illness on the path.  Her story is so inspirational especially to those who are suffering from sickness and pain. It is also more touching poignant reminder to me because my mother suffers from a similar condition which is now under control.

When Elea Redel could not hold her dorje and bell during a retreat, she found out she was diagnosed with the crippling disease rheumatoid arthritis. She has been suffering in pain for more than 7 years, as the disease has gradually destroys and deforms the joints of the body.

But the disease did not stop her from practicing Dharma. “Lama Zopa told me my suffering is nothing, but losing the Dharma is the real suffering.”

As she is well travelled, she found it difficult to be so dependent on others. In India someone needs to help her with the luggage, and sometimes even need help to lift a cup to her mouth.  “It was difficult in the beginning because of my pride. It is OK to ask for help once but I had to do it all the time. But it has helped me become more humble as before I wanted to appear to be strong so I didn’t like to ask for help as it showed a weak side of me. Lama Zopa once told me that just being the way I am is helping others. I think he means my sickness gives others the chance to help so now my dependence is not a problem.”

She says she found it difficult to accept her condition at first but the teachings helped a lot. “The law of karma says there is no one to blame for your suffering but yourself – you create the causes. In past lives I did things with a self-cherishing mind that made me happy at the time but which harmed others. Now I get it back in this way. There is nothing else to say. Fortunately, even with doing bad things in my past lives, I still have the karma to meet the lamas and receive the teachings.”

Elea wanted to go to India in 1985 but was in hospitalised in Paris for an operation which would make the trip impossible. Without her knowledge, a nun Thubten Wangmo had an observation done in Nepal which suggested it would be helpful to do a number of practices and whitewash the stupa at Bouddhanath in Nepal. These were done with money collected from students at Kopan Monastery.

Elea says when she next consulted the doctors part of her medical report had been whited out like the whitewash on the stupa and the doctors decided not to operate so it was possible to go to India. When she got there many Kopan students came up to her and said, “So you are Elea and you made it, our prayers worked.” Their faith gave her such inspiration and she felt she had to make the trip worthwhile to repay their kindness. India caused her a lot of pain but this inspiration and help even allowed her to do retreat and go to Tibet.

Elea says she has had to become friendly with her pain – accepting it without thinking it is good or bad; it is just the result of past actions. She has found there is no point in being upset with it; otherwise the pain is unbearable.

“My mind thinks I can do many things but my body can’t always follow. If I do everything I think I should do my body screams as it can’t take it. So I need to find a balance between what I want to do and what I can do. For example, Lama Zopa told me to do many fire pujas but my arm was so bad I couldn’t do them. Instead, I visualized myself doing the practice and did 100,000 mantras this way.” 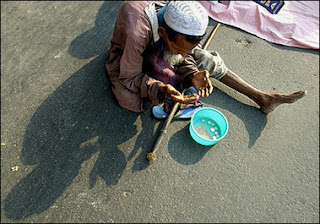 Elea says her sickness has allowed her to better feel other people’s suffering and understand the nature of suffering as pain is always wither. “In Buddhism we say may all people be happy, but when I was well I never really felt the suffering of others. Now I know how even a little pain affects an individual. When I see deformed beggars crawling along the road in India I feel for them and humanity. I can’t do a lot to help now but I think of the cause of their suffering. At least I can pray that they never create the cause to be born like that again.

Now 43, Elea says she doesn’t think much about the future, as the work she has to do on her mind has to be done now. She has found the most important thing is to have a warm feeling toward others. She says whenever she is negative her condition worsens. “Lama Zopa once told me that I should make my sickness my ornament and that ornament represents the suffering of all sentient beings. So using my sickness like this is my job.”
yours truly, STUMPBO @ 5:03 pm