I saw His Holiness the Dalai Lama and Lama Zopa Rinpoche! 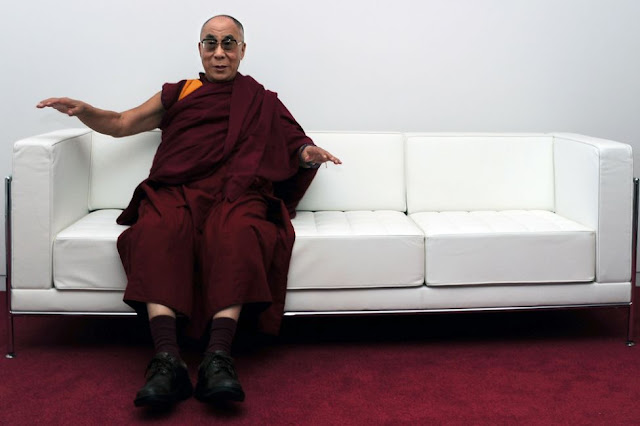 I had a dream at dawn. I was in a huge room and everyone was running around so excited about something. Many monks were also rushing about. Most of them were holding a khata in their hands.

Then somehow, I realised that everyone was queuing up to receive blessings from His Holiness the Dalai Lama. As I squeezed through the crowd, I saw His Holiness sitting on a big 3-seater sofa in the middle of the room. He seemed bigger in size than usual. He was giving blessing to those who went up to him one by one and also chatting with some too. I immediately joined in the excitement and wanted to receive his blessings as well. Somehow I was given a white khata and I started queuing. Then halfway, I thought I should let His Holiness bless something or autograph for me. However, I did not have anything with me. Then I saw a framed up photo of His Holiness on a table. I picked up the A4-sized photo, and removed the frame. Somehow a red marker appeared on my palm.

The wait seemed so long as I queued up for my turn. I finally saw His Holiness in front of me, sitting on the sofa. He was grinning and smiling widely as his hand extended for my khata. I felt so clumsy as I offered him the khata while at the same time holding on to the big photo and marker and red packet. His Holiness the Dalai Lama smiled so kindly as he blessed me with the khata over my head and tapped my head a couple of times. Then I asked him to sign on the photo. He took the photo and exclaimed "ohhhh" at his own picture and scribbled on it with big strokes. Then he gave it back to me. I was so happy! End of dream. I woke up and immediately recalled the dream. I was filled with bliss and happiness and felt so calm. But I dozed off again almost immediately.

I was in a smaller room now with no one around. The room was quite dim and as I gazed around the room, I suddenly saw a light shining down from the ceiling onto a spot. Sitting on a sofa armchair, I saw my precious guru, Lama Zopa Rinpoche! I quickly went forward to him, fell on my knees, with palm clasped. Rinpoche smiled at me without saying a word. He clasped his palm on mine and blessed me on the head. Then almost immediately he tried to stand up to leave. I quickly got up and supported him on his right arm as he steadied himself. In real life, Rinpoche has just recovered from a stroke. Then I helped Rinpoche as he walked towards the door quite slowly. Although we exchanged no word, I felt so relieved seeing Rinpoche and felt tears welling up, being so close to Rinpoche physically.
As we reached near the door on the way out, I noticed there was a small altar with a framed up A4-sized photo of Rinpoche and water bowls filled to the brim on the small table. As I passed the altar, suddenly the photo of Lama Zopa Rinpoche, fell towards the floor (it was amazing how the photo levitated above for a few seconds, hovered precariously above the water bowls and moved towards the floor). I quickly reached out and somehow managed to catch the falling frame from touching the floor with my right hand. I almost had a heart attack. What would have happened if the photo had really fallen on the floor while I was holding on to Rinpoche's arm on my left hand?

Throughout this time, Rinpoche kept smiling and even chuckled a little (his usual mischievous chuckle). I was so relieved as I held the photo frame in my right hand and holding Rinpoche's arm with my left hand as I guided him out of the room.

It has been almost a year since I last dreamt of His Holiness the Dalai Lama and Lama Zopa Rinpoche (I did not have any dreams of Rinpoche since his stroke). I am so happy with this dream. Am I seeing them soon?