My "peanuts" cents take on the City Harvest probe

This infographics was done by Channel NewsAsia, showing the timeline of events leading up to the arrests of the 5 City Harvest church members including its founder, Kong Hee,  for alleged criminal breach of trust and for falsifying church accounts. They allegedly misused $23 million $50 million (updated as on 27 Jun 2012 is more than $50 million instead of $23 million) of church funds for Sun Ho's music career to connect with people and reach out to non-Christians. Ho, who is Kong Hee's wife, is a singer based in the US. 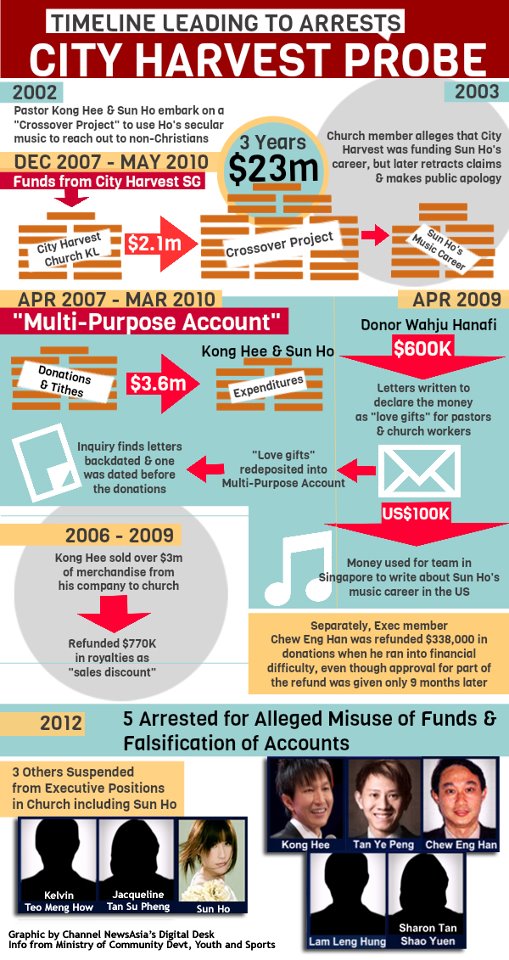 I do not wish to comment much on this saga but I am just simply shocked that the amount at stake was actually a whopping S$23 million $50 million!!! I know mega churches are rich but I didn't know they are THAT rich. It would never occur to me they can actually make that much money for a non-profit organisation. We all have been through the NKF and Ren Ci incidents. The question again is, why wasn't the money put to better use? As a charitable organisation and church, they should be helping to spread the gospel and not pursuing other secular initiatives.

We should not criticise the religion but rather the people who are running the organisation should be examined and punished for mismanaging the funds.  The followers should have a clear mind of what is going on. But a strange phenomena is some of the followers are actually rallying behind their Pastor despite their money being misused.

I hope that despite the arrest of the City Harvest Church leaders, the public will not lose faith in their various religions and organisations, and thus stop contributing to charities and spiritual pursuits. I hope they will continue to do their part to support proper religious organisations.

Tan Thiam Lye, chairman of the Singapore Taoist Federation, said: "As a religious group, we have to define our roles clearly. For example, in areas like finance and administration - to divide tasks clearly. If you have one person to do all tasks, people will think we are not transparent."

This is another lesson for all religious groups to be mindful of integrity and to exercise caution when it comes to managing donations, charity or helping people. Indeed, it is crucial that a religious organisation be transparent in the handling of funds, and be accountable to all its followers and members.

I take the example of the Buddhist organization of which I am a member of, the Foundation for the Preservation of the Mahayana Tradition (FPMT). FPMT is an international, non-profit Buddhist organization, with 160 centers, projects and social initiatives worldwide, under the spiritual guidance of my guru, Lama Zopa Rinpoche.

Each year, FPMT provides a clear and concise annual report made available to the public and members. For 2011, both their income and expenses stand in the region of a merely US$7 million each. They hardly break-even. And this includes supporting all its 160 centers and projects in 40 countries!  All proceeds from sales of Dharma items and donations are used only to make more Dharma available and to further charitable missions and projects. For example, even for an organised trip/retreat, all members would be provided with a breakdown of each expense, before and after the trip, all properly accounted for in black and white.

That is why I am quite stunned at how the City Harvest people could possibly misuse $23million $50 million and there was no proper check until it was too late. To me, this precious amount of money could have been used to benefit so, so, so, so many people; healing the sick, helping the poor, propagating the Dharma by printing text, feeding the Sangha, supporting monasteries, and building more holy objects/places of worship, organising pujas, saving animals... etc...

What a waste. What a series of unfortunate events. More to come as things reveal themselves. Goes to show we really cannot escape the karma which we have created for ourselves, whether it is good or bad.
yours truly, STUMPBO @ 2:14 am

Email ThisBlogThis!Share to TwitterShare to FacebookShare to Pinterest
Categories FPMT, My Thoughts, Stories