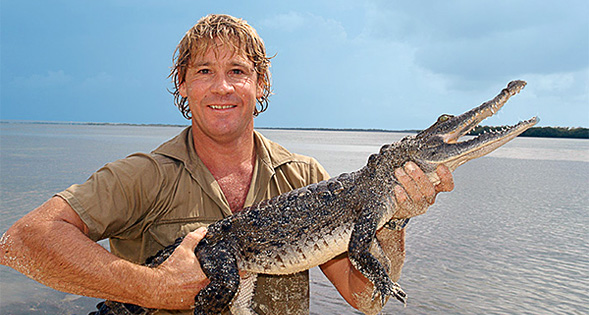 My guru wrote to Steve Irwin's widow, Terri, on 21 September 2006 after his demise:

I am the spiritual head of FPMT, which is a worldwide organization devoted to benefiting society through the practice and philosophy of Tibetan Buddhism, education, public service, health and culture. FPMT has 141 centers and activities in 31 countries. We have 21 Centers and projects in Australia, including Chenrezig Institute which is very close to the Australian Zoo.

I am from Nepal, near Mount Everest. I am sending you my condolence for our dear Steve Irwin, who is known to the world as the crocodile hunter, maybe even known to the snakes and crocodiles, as well. I watched so many times Steve Irwin on TV for so many years, Steve catching snakes and crocodiles, letting them go and also helping them, and all his incredible excitement. It made me curious when I was watching him, being very active, how his life would end, whether one day he would be killed by one of those animals.

When I heard the news I immediately did prayers, chanting many mantras, and prayers for him, purifying anything that causes suffering. I made prayers for the best thing to happen to him. You and your family must be very sad, but since you have a strong bond with him, then according to Buddhist philosophy, you have created the cause to meet him again, maybe not the same body, but different, but to meet again. He may not reincarnate in the same shape or body. Like the flame when you light another candle from it, the flame continues.

Please continue your good heart, bringing peace to the world, to human beings and animals (that are the largest number in the world when you compare even to humans). Continue to give your love to them.

With much love and prayers,
Lama Zopa Rinpoche
yours truly, STUMPBO @ 9:37 am