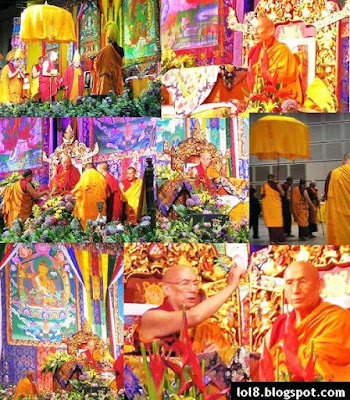 The public grand pujas and initiations conducted by my guru, His Holiness 101st Gaden Tripa Lungri Namgyel Rinpoche began today. I was there for the 3 sessions; the 400 Offerings Puja, the Special Healing Puja and the Manjushri Buddha Initiation.
I always have an unusual special feeling whenever I meet His Holiness. Two years ago when I first met him, when he arrived, as he was walking slowly towards the stage, tears welled up in me, and my pores were all standing, as I clasped my palms in respect. Even though His Holiness has a serious demeanor, I was nevertheless still moved when I see him. No other lamas (besides His Eminence Lama Zopa Rinpoche) have created such a reaction from me. Since then I knew I had found my guru.
Today when I saw him again, I have the same reaction. This time, again I was almost in tears, my hair was standing, my pores were standing and my whole body was feeling very hot (even though the aircon was freezing just a few seconds ago). Many thousands people present bowed in respect and many kneeled down to welcome him as he strolled slowly up the stage in Suntec Convention Hall. All his 18 lamas were in attendance to give him a warm welcome.
His Holiness the 14th Dalai Lama appointed Rinpoche as the abbot of Gaden Shartse Monastery and Rinpoche was subsequently appointed the position of the 101st Gaden Tripa - the supreme head of the Gelug lineage and literally the throne holder of Tushita. Contrary to widespread belief that His Holiness the Dalai Lama is the Leader, the actual Head of the Gelug lineage is the Gaden Tripa, who is the throne holder to the seat of Lama Tsongkhapa. And the founding of the Gaden Monastery by Lama Tsongkhapa was prophesied by Buddha Shakyamuni. In the Manjushri Root Tantra, Buddha said : "After I have passed away from this world, when the earth becomes desolate, you will take the form of a child and enact the deeds of a Buddha. At that time there will be a great monastery called RabGa in the Land of Snows." "Ga" is the first syllable of "Gaden" which means "great bliss".

I am grateful for having the good karma to meet my guru, and I hope this connection will leave a karmic imprint in my mental continuum to create the necessary conditions for future blessings and bliss.
yours truly, STUMPBO @ 11:44 pm