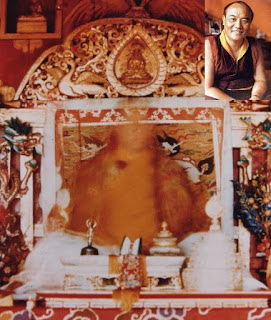 The late 16th Karmapa helped foster the transmission of Tibetan Buddhism to the West. He established Dharma centers and monasteries in various places around the world in order to protect, preserve, and spread the Buddha's teachings.

During the 7 weeks between his death and his cremation, Karmapa's body spontaneously shrank to the size of a small child. During the cremation a circular rainbow appeared around the sun in a clear blue sky. While his body burnt, an object rolled from the flames to the edge of the stupa to Lopon Chechu Rinpoche. This object was quickly recovered and proved to be the Karmapa's eyes, tongue and heart. This indicates that the body, speech and mind have come together to be saved as relics for the future and is common in only the highest of accomplished Buddhist yogis.

A yogi who has acquired the highest forms of accomplishment can manifest what is called "the rainbow body" or "body of light." Usually this happens after death, but it has been known to happen at other times. HH the 16th Karmapa was observed by many people as he temporarily dissolved in this way.
yours truly, STUMPBO @ 11:25 pm