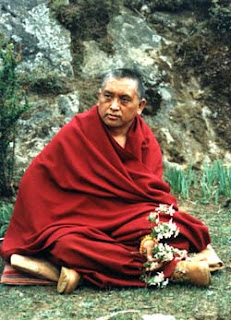 It is a joyous reunion to me. His Eminence Lama Zopa Rinpoche is here! I last met him 2 years ago. Tonight I just came back from meeting Rinpoche. He gave the Bodhisattva Ksitigarbha initiation. It was quite early in that he ended the session "early" at 11.30pm. Normally it was unpredictable when Rinpoche will finish his teachings, sometimes in the early hours of morning. The last time, I remembered he stopped at 4.30am.
Before Rinpoche arrived, my whole body was feeling very hot, as soon as I did my prostration, eventhough the hall was air-conditioned. And the hair on my arms were standing.I offered Rinpoche kata as soon as he arrived and got down from the car. He said "How are you?". Watching Rinpoche do full prostration to the altar of Buddha Shakyamuni, Amitayus Buddha, Chenrezig and Green Tara, I was tearing a little. The rest of the session was hearing Rinpoche's teachings and his humour. Yes he speaks English. Perhaps Rinpoche knows its a Thursday night and some of us need to work the next day. Hence he stopped at 11.30pm. He is so very compassionate. I am so glad he is here.
yours truly, STUMPBO @ 12:01 am