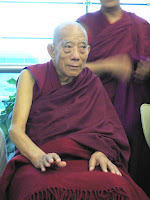 I am so glad that His Eminence Kyabje Lati Rinpoche is coming to Singapore this coming Monday morning. 20 lamas have already arrived, and another 8 lamas will be coming together with Rinpoche. I have not been to puja for some time. This Sunday evening there will be a 16 Arhats puja to pray for Rinpoche's safe journey here and his long life. The time of puja is the time when Rinpoche will be boarding the plane from Dharamsala. The puja will also benefit anyone who attends the session.
His Eminence Venerable Kyabje Lati Rinpoche is the Spiritual Assistant to His Holiness the 14th Dalai Lama – Rinpoche serves His Holiness faithfully till today. Lati Rinpoche is a reincarnation of the great practitioner, Gongkar Rinpoche.
Belonging to a very rare class of scholar, saint and practitioner who completed his training in an independent Tibet, in 1959 Rinpoche followed His Holiness the XIV Dalai Lama into exile, where he continued to spread the Dharma by teachings at various monasteries and schools.

Rinpoche has authored many important books in Tibetan Buddhism including: Death, Intermediate State and Rebirth, Mind in Tibetan Buddhism, and Meditative States in Tibetan Buddhism. Currently, Lati Rinpoche continues a rigorous teaching schedule at Gaden Monastery where he has been appointed tutor to many of the young Rinpoches by His Holiness the Dalai Lama.

May Lati Rinpoche live long and continue to spread the teachings of the Buddha for the sake of all beings.
yours truly, STUMPBO @ 11:07 pm