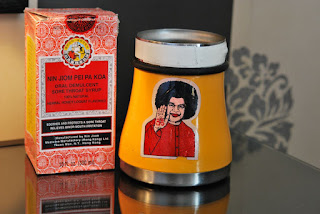 Jason Mraz wrote in his blog, in reply to his tweeters who asked him "What's in the mug you’re always sipping from during concerts?" and Jason's reply "Nin Jiom Pei Pa Koa 川贝枇杷膏 is oral demulcent sore throat syrup. It’s like tea, but more like molasses from the China Sea."

Wow, Jason Mraz drinks Pei Pa Koa 枇杷膏. I was just a little surprised and amused that a famous American singer drinks Pei Pa Koa too, a cough mixture which most Asians are so familiar with. It kinda gives me a heartwarming feeling. Nin Jiom Pei Pa Koa is herbal honey loquat, a sweet thick syrupy mixture which uses traditional Chinese natural herbal remedy for the relief of sore throat, coughs, hoarseness, and loss of voice. Even kids love it as it tastes sweet and not bitter at all, unlike most Chinese medicine. 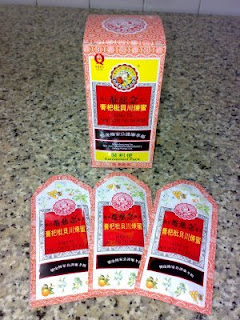 Rich Friend recommends the Pei Pa Koa that comes in little satchets which we can just tear it and suck the syrup from the satchet. Rich Friend claims the mixture seemed more potent and effective somehow. This packaging is not available in Singapore, only in Hong Kong. So sometimes I will get Rich Friend to buy the satchets for me from HK.

And even more interesting is on his mug, Jason Mraz has a sticker of Sathya Sai Baba. Some say he is a holy sage in India who often performs miracles conjuring up jewellery or objects from thin air to give to his devotees as solid proof of God’s ability to provide for all. To many, Sai Baba is an avatar, an incarnation of God himself. Hmm.... again amused that Jason Mraz knows about Sai Baba too. I have a dream of Sai Baba once a few years ago, eventhough I did not know him then.

I heart one of Jason Mraz's song alot, it's called Lucky (which is in my player in the right column). Nin Jiom Pei Pa Koa should get Jason to be their spokesperson in the American market and he can get free flow of the syrup for life. Haha.

Email ThisBlogThis!Share to TwitterShare to FacebookShare to Pinterest
Categories Songs of Life