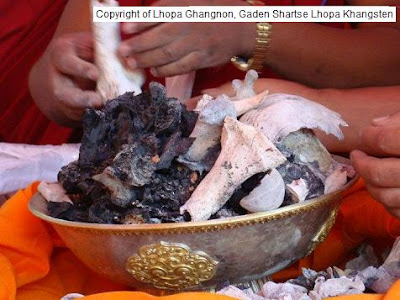 Precious relics of the Heart, Tongue, Eyeballs, Bones
Above photos are a first glimpse of Lati Rinpoche's holy relics that were found inside the hearth, provided by Gaden Shartse Monastery. When the pyre was opened, many amazing relics have been found. Among the relics, was Rinpoche's heart relic which was intact and unburnt, and so were the tongue, eyeballs and some bones. The most special eye, tongue & heart relics are representative of His vajra body, speech and mind.  Also thousands of round  pill-like relics appeared. According to an old Geshe-la, Gelong Choephel, who is an expert in deciphering and recognising holy relics, inside the heart relic, there was a small Vajrayogini deity, which also happened to be Rinpoche's main deity. 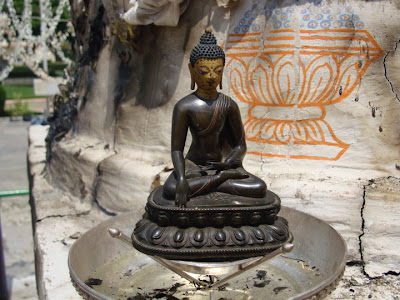 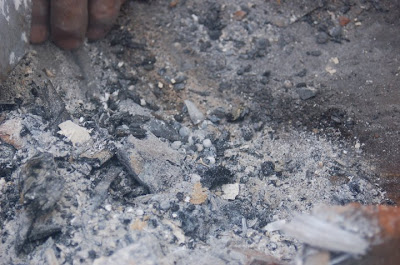 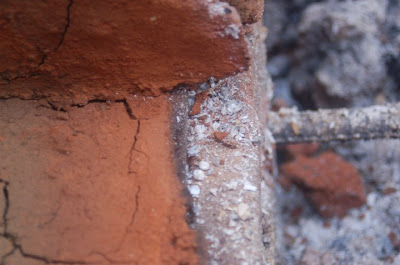 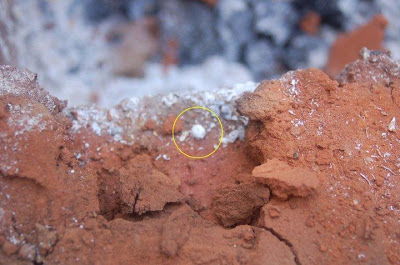 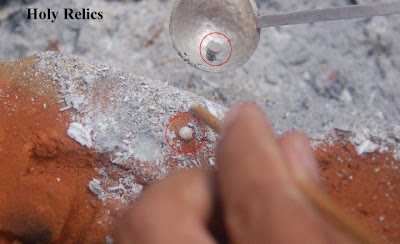 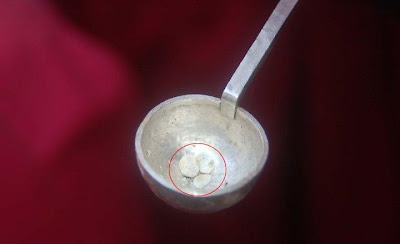 The above are more photos provided by Gaden Shartse Monastery. There were many many white pill-like relics in the pyre when it was opened up a few days after Rinpoche's cremation. 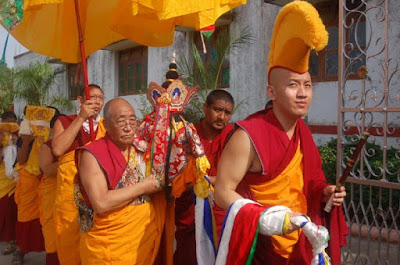 A grand elaborate procession to invite back the holy relics of HH Kyabje Lati Rinpoche back to Lati Ladrang, led by H.H. Kyabje Zong Rinpoche and other Rinpoches.  Behind was Lati Rinpoche's personal attendant Sopon-la, carrying Rinpoche's ceremonial robe and crown. 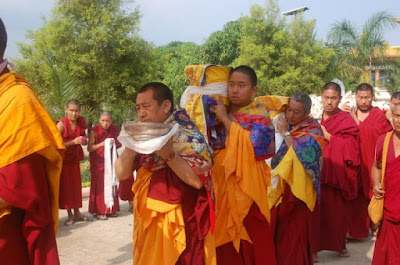 Solemn moments as Rinpoche's holy relics were carried back to Lati Ladrang for more pujas. 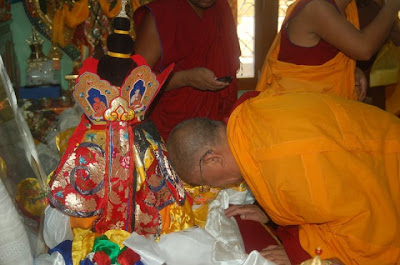 Long-time attendant to Rinpoche - Gyen Soponla pays his respects to Rinpoche and his holy relics on his throne seat. 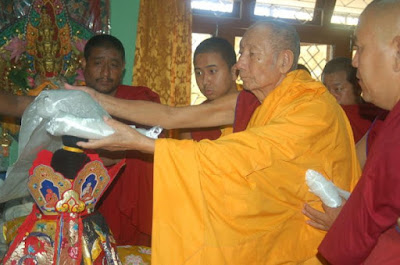 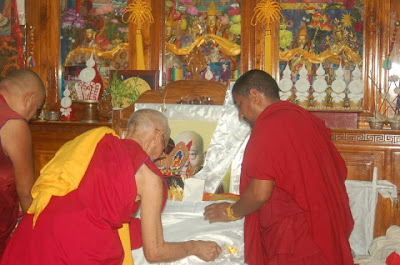 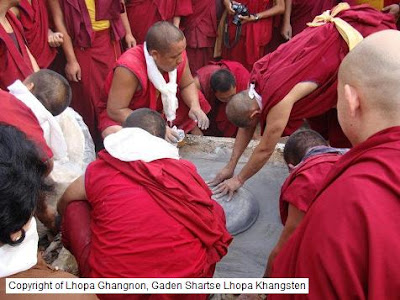 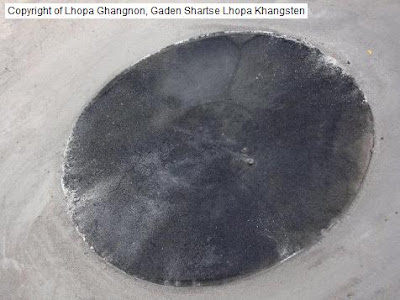 As mentioned earlier, another auspicious sign that Rinpoche left behind after the cremation, was a little baby footprint found inside the hearth, pointing towards the East direction. It was also the same East direction where the first smoke shot out from the pyre when fire was lit on Rinpoche's holy body. This indicates that Rinpoche's rebirth will take place in the East. The small size of the footprint also meant that Rinpoche will take rebirth very soon. 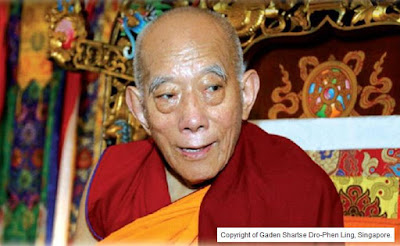 Gaden Shartse Monastery has informed Dro-Phen Ling center in Singapore about other earlier auspicious signs too.
It was learnt that on 12 April (the day when Lati Rinpoche passed away at 5.25am), after his prayers, he had requested his personal attendant to help him bathe. This was unusual as Rinpoche normally bathe only after his breakfast. After his bath, Rinpoche told Sopon-la that "it is time for me to go" and instructed him to leave his room. With that, Rinpoche went into the Clear Light Meditative State (Thugdam). His attendants noted that at this time, an Unisha had appeared on top of Rinpoche's head. An Unisha is a flesh protuberance on the crown of the head. This was clearly one of the 32 distinctive and auspicious signs of a Buddha. 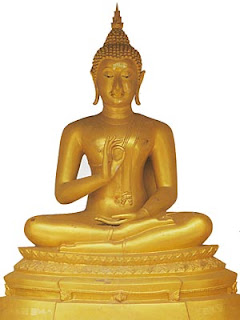 The doctor was called and he certified that Rinpoche had already passed away. However, Rinpoche's body remained warm throughout the next 2 days until 14 April, after he came out of his meditative state. Even after he was out of clear light meditation, throughout the 8 days until his cremation on 19 April, his body remained intact in its natural state with no sign of decomposition nor smell. Rinpoche's holy body was placed in coffin without sealing the top., which was just covered by cloth. His holy body remained in his room in Lati Ladrang until his cremation.
It was also noted that Rinpoche passed away sitting in the lotus position (the lotus represents the Buddha Mind). This is a position of meditation that symbolizes perfect balance of thought and tranquility. Lati Rinpoche's hands were in the Vitarka Mudra.
This is the mudra of teaching gesture. The right hand points upward, the left downward; both palms are tuned outward. The thumb and index finger of each hand form a circle. The right hand is at shoulder level, the left at the level of the hips. In a variant of this teaching gesture, the left hand rests palm upward in the lap, and the right hand is raised to shoulder level with its thumb and index finger forming a circle.

The Vitarka mudra (otherwise known as the mudra of discussion) is the gesture of discussion and transmission of Buddhist teaching. This mudra represents the mystic gesture of Taras and Bodhisattvas.

In true fashion of an Enlightened Being, Lati Rinpoche was a great teacher / master / guru and a modern-day Bodhisattva, and he is certainly taking rebirth, and coming back to us in order to teach us again and again, until we are all enlightened.

Lati Rinpoche has shown us, through diligent practice, we can also achieve Enlightenment within this lifetime. Lati Rinpoche is an Enlightened Being, a Buddha. And all these great auspicious signs and holy relics are living proof from a Buddha. May all be auspicious as we await his quick return. Om mani padme hum!
I quote what Jetsunma Ahkon Lhamo wrote:


When a Buddhist speaks of “a True Path,” this is not meant as: “My religion is better than yours.”  It is not intended to be haughty or prideful.  Rather, we want to be on a path that has repeatedly produced results, and can be expected to do so in the future.
That is how I view the Buddha’s teachings.  They did not come from any ordinary intellectual process or experience, or from a compilation of other people’s views.  They arose from the mind of Enlightenment.
Some people call themselves “enlightened,” and when I hear this, I cease to believe them.  The Buddha simply said, “I am awake.”  He never made himself out to be a god; he never said he was different from anyone else.  He simply said, “I’ve given you the Path.  Now work out your own salvation.”
See other related posts: