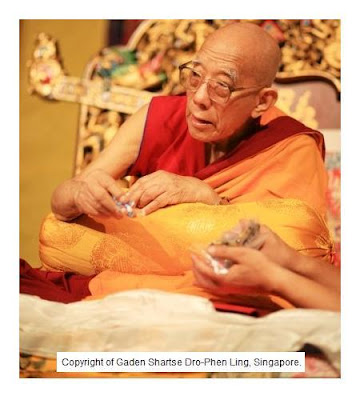 Latest updates from Gaden Shartse Drophenling in the Monastery:
On the early morning of 19 April, our dearest Lati Rinpoche's fire puja has been auspiciously completed at the open ground of the Monastery's debate hall. Thousands of monks came to make prayers before the start of the actual fire/cremation at 7am India time. The fire puja was completed some 4 hours later. At present, 24-hour prayers are still ongoing and will be continued for the next 3 days and 3 nights. This Friday 23 April, the stupa will be uncovered to check and to retrieve Rinpoche's relics and to uncover his signs.
Lati Rinpoche has attained Nirvana. May all be auspicious! 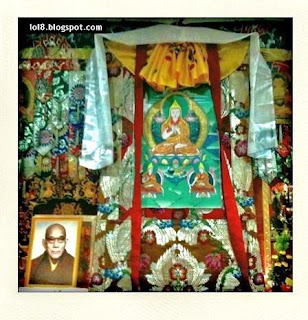 I will blog about news of Lati Rinpoche's when I have any more updates. I would like to express my appreciation and thanks to all the readers who have left comments in this blog as well as sent me emails about their thoughts about Rinpoche. So many students and devotees of Rinpoche all over the world, besides Singapore and Malaysia, were saddened and distraught by the news of Rinpoche's passing. And especially students from the United States and Europe have been searching for news of Rinpoche everyday since his passing the whole of last week. This is evidence of a great master/guru/yogi/practitioner who had touched and benefited many sentient beings in this lifetime and since previous lifetimes. 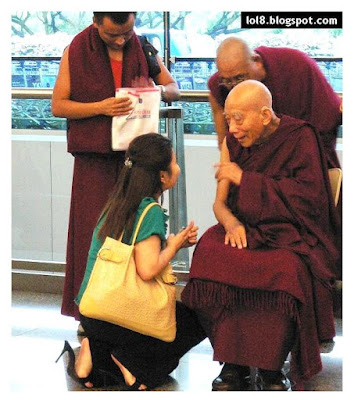 On a personal note, with a heavy heart, I still could not bring myself to believe that Lati Rinpoche has already left. Even though I had only known him for about 5-6 years, Rinpoche was an unbelievably compassionate, kind, gentle, humble and dedicated teacher. He was one of the very few living senior masters left who was a true holder of the lineage of Lama Tsongkhapa.

Lati Rinpoche's passing serves as a reminder to me the importance of practicing, and to treasure all the gurus /masters who are still around, as well as to give full-fledged support to the Sangha. More importantly, Lati Rinpoche's death taught me the lesson of impermanence, yet again. His expedient example only emphasized simply the benefit of expounding and practicing the Dharma. I witnessed The Buddha manifested through Lati Rinpoche (from his teachings, his practice, his followers, and the eventual evidence of his relics). I consider myself most fortunate to have the good karmic affinity to have met Lati Rinpoche in this lifetime, to have had received his teachings and empowerments as well as immense blessings. I would never forget the kindness of my guru.


Good bye, Lati Rinpoche.
May your reincarnation return to us as soon as possible.
Om mani padme hum! __/\__ 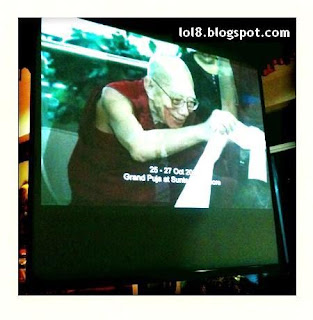 This life as impermanent as a water bubble;
Remember how quickly it decays and death comes.
After death, just as a shadow follows the body,
The result of black and white karma follow.
May the gurus who show the noble path
And spiritual friends who practice it have long lives.
In all my lives, never separated from perfect gurus.
Below is my favourite rendition of the 6-syllabus mantra, Om mani padme hum, by Boris Grebenshikov, the former Soviet Republic's most famous underground pop artist, who has been a practicing Tibetan Buddhist for years. This is a marvelously moving and westernized version of this timeless chant. I even have this track in CD - it's called Refuge, by Gabrielle Roth & The Mirrors.
Dedicating this to Lati Rinpoche's swift rebirth...