The auspicious day a parrot came to visit

Over the other weekend on Vesak Day, while I was at Amitabha Buddhist Centre's celebrations, a very special being came to visit. 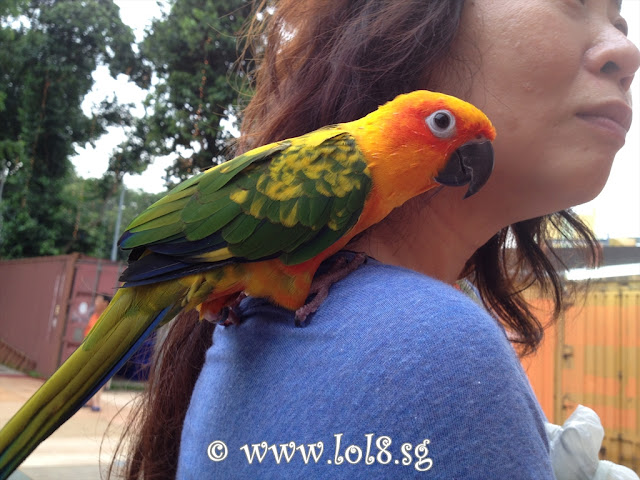 When a long haired lady walked past my booth, I saw a brightly coloured parrot in beautiful bright orange and green hues perched on her shoulder. At first glance, I thought she was wearing some unusual accessory like a fake parrot on her! (I really have seen someone wearing a fake bird on her back in the past!).

Her pet parrot was so delightfully tame and seemed perfectly happy just following its owner on this outing.  It would rub itself against her right cheek on and off.  I managed to have a little chit chat with its owner.

She has brought her pet parrot to pray and to circumambulate the Buddha's statue in order to receive blessings on this auspicious day which marks the Buddha's enlightenment. I told her it was very kind of her to bring her pet to make a connection with the Triple Gem. She told me sometimes she would chant "om mani padme hum" to her parrot, and it seems to like the mantra very much. I asked if the parrot can mimick her words. It does not know how to mimick human like some other parrots. I asked that because when I was young, my neighbour used to own a parrot and that parrot only knew how to call my name. Haha!

The lady then shared with me how this parrot came into her life.  She used to own a dog a few years ago. When the dog passed away she was devastated, so she somehow did not want to have another dog as a pet. She made a wish and prayed to Buddha after the passing of her dog, that she would one day be able to own a bird as a pet instead. One to two years later, one fine day, a parrot flew right through the window and into her house. It seemed contented to stay in the house and would not fly away. The lady believes that this parrot is the reincarnation of her dog.

Another funny coincidence between her dog and parrot is that both are usually very well behaved and tame with other people, but both do not seem to like her husband. The parrot would bite the lady's husband, just like her dog did! Even her husband has exclaimed that the bird must be their dog in its past life!

I told her that she and her dog must have shared a deep affinity with each other, hence they meet again, this time as a bird. I am so glad she and her parrot came and planted the seed to meet the Buddha Dharma again in future lifetimes. May her pet parrot have a happy life, and in its future lifetimes have a precious human rebirth.

This was one of the highlights of my Vesak this year - meeting a parrot who came to visit.