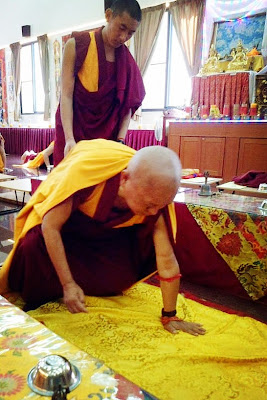 When I read the update from Venerable Roger about Lama Zopa Rinpoche and watched the video clip below, I was a little brimming with tears. A few days ago, in Taiwan, before Lama Zopa Rinpoche ascended the throne, he made 3 prostrations in front of the altar (photo on right). Rinpoche said that this was the first time after his stroke (almost 2 years ago) that he made prostration without needing any assistance.

Venerable Roger wrote, "Rinpoche took absolutely no interest in his body. He never asked the doctor how he was or what he should do … what were his chances, will he be OK? Not the slightest concern did he seem to have about his critical condition. Rinpoche focused on prayers for the sick people in the hospital and even did a little fundraising for the (Christian) hospital in the later part of his stay (in the hospital)."

"And so nothing has changed over the last two years in this sense. Rinpoche seems not to have the slightest interest in recovering or not (but recovery is happening). This is hard to relate to for most people, why wouldn’t you want to get better … so you could help others. Prior to the stroke, Rinpoche lived the same way … having no worldly concern or interest … everything was for others. There was no concern for sleep or any worldly benefit, no interest in rest. From my experience being with Rinpoche, there was no space for the eight worldly dharmas, there was no self cherishing … signs such as these was none.... Indeed it was hard to understand his actions …  because they are always opposite to the world. Rinpoche has no rush to go anywhere as he is already there. And as Rinpoche always says, 'Taking care of others is the best way of taking care of yourself.' "

I am also so happy to know that Rinpoche doesn’t cough anymore, especially during  teachings. Previously he was always coughing in every single teaching. I remember the very first time when I met Rinpoche many years ago, he was coughing so so badly when he was giving teaching. Every sentence was interrupted with long loud coughs in between, that I was taken aback. I felt so much respect for him then that I was brimming with tears and my body was burning hot, even though it was my first meeting with him. When I finally went up to see and talk to Rinpoche, he looked at me for a second and closed his eyes for a long time. It was as if he was 'scanning' me. Then afterwards he blessed me, smiled and we had a photo taken together.

A couple of months ago, when I attended His Holiness the Dalai Lama's Jangchup Lamrim teachings, I met up with so many of my precious gurus too.... Lama Zopa Rinpoche, Dagyab Rinpoche, Choden Rinpoche, Healing Lama Kangyur Rinpoche and so many others. Everyday, amidst the horrendous crowds, I would wait for Lama Zopa at the door where he was coming in and going out before/after the teachings in order to see him. I think many of my friends didn't understand why I had to do that, but I feel complete joy when I see him, and a little sad as he took longer time to walk as his right leg was still recovering from stroke. He managed to bless me one of the days. I had asked him about his legs as they were swollen at that time.


"Practice with the bodhisattva attitude every day. People can't see your mind; what people see is a manifestation of your attitude in your actions of body and speech. So pay attention to your attitude all the time. Guard it as if you are the police, or like a parent cares for a child, like a bodyguard, or as if you are the guru and your mind is your disciple."  - Lama Zopa Rinpoche.