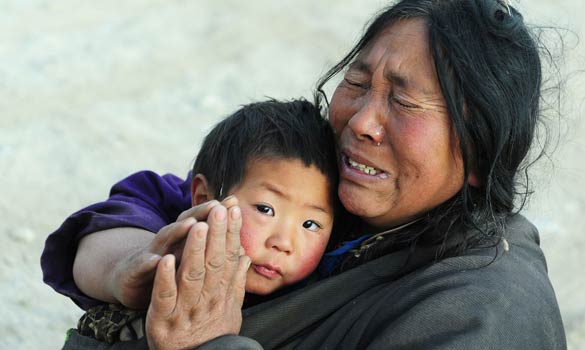 Been wanting to write about this but was too busy with the updates on Lati Rinpoche's passing. Did a quick check online on the number of disastrous earthquakes which had happened recently just this year alone. Here is the list of SIGNIFICANT earthquakes, excluding the minor ones:
Tens, hundreds of thousands of lives have been lost due to these earthquake tragedies as well as other natural disasters. And when I read news reports on the latest earthquake in Kyegudo (Yushu), Qinghai, I'm fuming. I quote this article, some excerpts....

Now the Buddhist monks who responded first are being pushed out of the disaster area and off of state media — apparently sidelined by Beijing's unease with their heroism and influence.

Monasteries were given verbal orders the last two days to recall their monks. Amid hours of coverage for China's national day of mourning on Wednesday, no monks were visible in the official proceedings.

It was a jarring omission in light of their contributions to the week-long rescue and relief effort following the quake, which killed 2,064 people and injured more than 12,000 others. 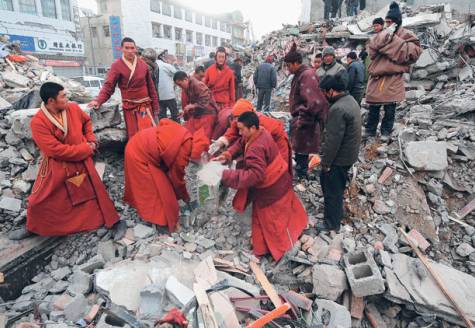 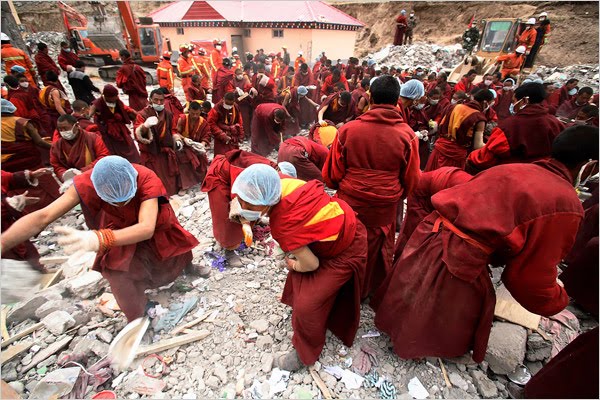 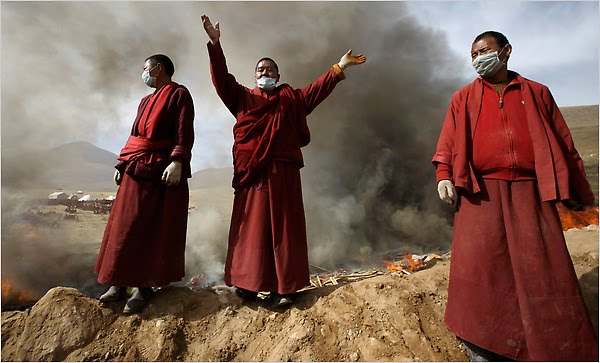 His Holiness Dalai Lama has requested to visit Qinghai, where he was born, to comfort the earthquake victims. His request, not surprisingly, was ignored by the Chinese Government, who prefers to deem any actions of the Dalai Lama as politically-motivated. Where some 10,000 survivors, mostly Tibetans, were left homeless from the Yushu earthquake, they told reporters they were being neglected by the government, and insinuated that it was because of ethnicity. “They staged a show with the aid trucks, pretending to deliver food, but actually driving past us,” said one monk. “Look around you, the Tibetan families here have no food, water or medicine.” In addition, we were told by Chinese reporters, who could not cover the story themselves, that a Tibetan who was caught stealing was bound and dragged through the streets. 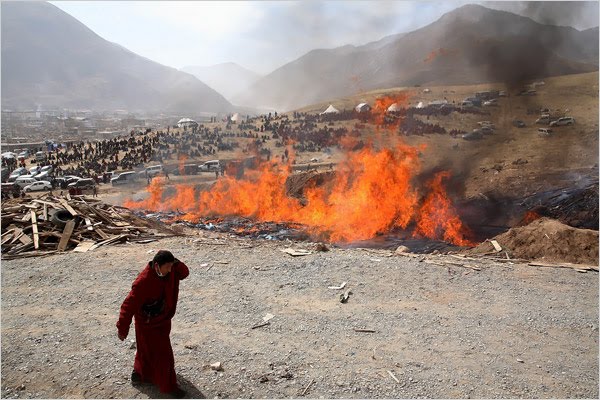 As the Buddha explained thousands of years ago in his teaching in the Maha-parinibbana Sutra 3:14 (when asked by his disciple Ananda), earthquakes are due to eight causes. Their principal cause is explained in terms of agitating the atmosphere. How can the atmosphere be intentionally agitated?

First reason:
"This great earth, Ananda, is established upon liquid, the liquid upon the atmosphere, and the atmosphere upon space. And when, Ananda, mighty atmospheric disturbances take place, the liquid is agitated. And with the agitation of the liquid, tremors of the earth arise. This is the first reason, the first cause for the arising of mighty earthquakes."

Second reason:
"Again, when an ascetic or holy man of great power, one who has gained mastery of his mind, or a deity who is mighty and potent, develops intense concentration on the delimited aspect of the earth element, and to a boundless degree on the liquid element, he, too, causes the earth to tremble, quiver, and shake. This is the second reason, the second cause for the arising of mighty earthquakes." 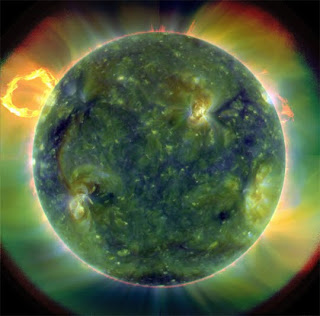 Hence the main cause of earthquake is when we humans agitate the natural environment  in the seas, injuring the sea creatures as well as other co-habitants. Destruction of nature and its natural resources results from ignorance, greed and lack of respect for the earth's living things. And due to this, our future generations will be greatly affected if we do not stop causing harm to the earth. Earthquakes are the reaction, a cry from the earth.

"We need to consider how our actions, in affecting the environment, are likely to affect others. This is often difficult to judge; but it is clear that we are the only species with the power to destroy the earth. Birds and insects have no such power, nor does any other mammals. Yet if we have the capacity to destroy the earth, we also have the capacity to protect it. I believe we have an urgent responsibility to do so.

In conclusion, I appeal to governments, international aid organisations and other agencies to extend whatever assistance they can to enable the families of those devastated by this tragedy to rebuild their lives. At the same time, I also call on the survivors of this catastrophe to recognise what has happened as the workings of karma and to transform this adversity into something positive, keeping their hopes up and meeting setbacks with courage as they struggle to restore what they have lost. Once again, I pray for those who have lost their lives as well as for the well being of those who have survived.

Right now, April 27th, His Holiness the Dalai Lama is leading prayers for the Kyegudo earthquake victims in Dharamsala starting  at 1:00pm IST (GMT+5.30).  It will be a live webcast and can be viewed at http://dalailama.com/live
yours truly, STUMPBO @ 1:02 pm