I am often fascinated by some modes of transport, old or new. Wherever I go, Singapore or overseas, if I see some nice, nostalgic or interesting models, I would snap them. Sometimes I ride in them. 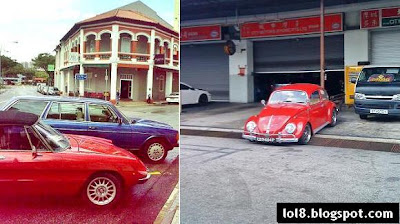 Spotted these two 1970s cars (one of them a Mercedes) in Chinatown. I remember my Primary One teacher Mrs Goh used to drive one of these. The other flaming red Beetle car in Sin Ming. My sis loves beetle cars. Although I would not want a Beetle as a personal car, I feel the Beetle is a piece of art itself and we should preserve it forever. 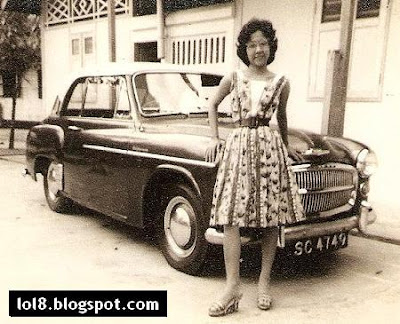 In the 1950s, Mom was posing with Grandpa's handsome 2-door car in their huge house. I couldn't help noticing Mom's waist. It was probably smaller than the small steering wheel !! >_< 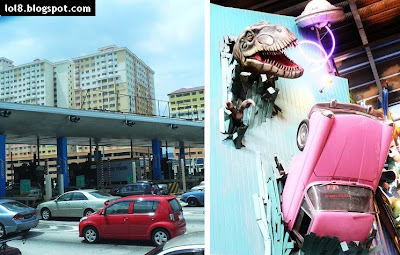 Closer to home, in Malaysia, there were many of their local made Proton Sagas and little Kanchils, as well as rugged sporty jeeps. Here at the toll entering Kuala Lumpur, there were many Singaporean cars as well. I notice Malaysian drivers are damn good drivers, as in they could speed so fast, they could twist and turn even in traffic jams. I salute them. This art piece was found in Genting Highlands' indoor theme park, the pink car crashed into the wall with the dinosaur!

In neighbouring Thailand, I love the bright shocking pink cabs all over Bangkok, and their famous "taxi" Tut-Tuts, the open-air 3 wheeler half-car, half-motorbike. Riding on a Tut Tut, made my heart went pitter patter. The other pix were smaller and older versions of Tut Tuts we saw in Chiang Mai. I feel they looked really cute. 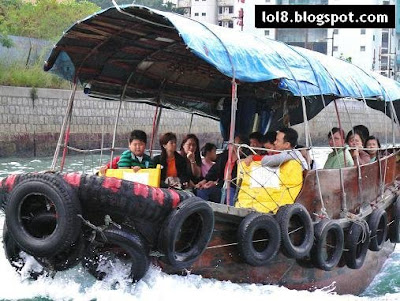 Over in Hong Kong, we cruised along HK Harbour in their Chinese junk boats, passing by the famous Jumbo Floating Restaurant. Sitting in these junk boats were the closest experience we could get of a typical historic chinese ship whose history dated all the way back to the Han Dynasty in the 2nd century. 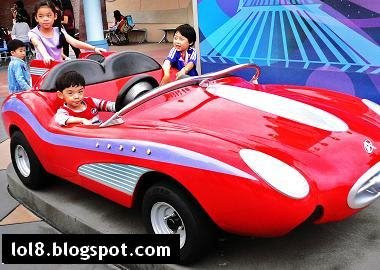 I could not resist taking this flaming red car in Disneyland. Think it was some Back-To-The-Future car. A handsome car with handsome nephew on the wheel. 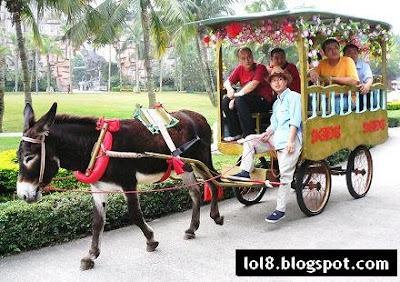 Near Hong Kong, in Shenzhen China, while touring the theme park, Window of the World, these donkey-ridden sedans were available for rent. The guy manning this donkey was quite handsome. Window of the World houses vivid replicas of the world's wonders, historical heritages and sites. Frankly, I do not like Shenzhen. 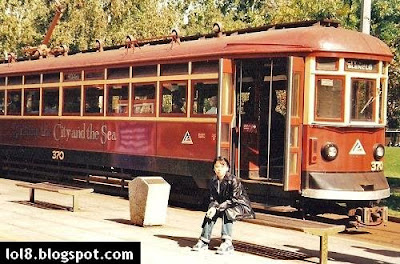 We could take funky tram rides in Australia, running along electrified lines all over the city. They co-exist nicely with the modern vehicles, as part of public transport. This tram was in Adelaide and I had a nice slow ride. Most of the trams have been restored to the original condition of those when they first entered service in 1929. They looked so robust and sturdy, I loved them. 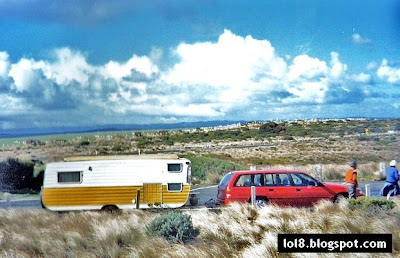 Along Great Ocean Road, Australia, I chanced upon this caravan. They have many caravan parks for camping. The scenery was so breathtaking that I would think there was no need to stay inside the caravan much except to sleep. I did not have the chance to stay in a caravan yet, would love to do so one day. 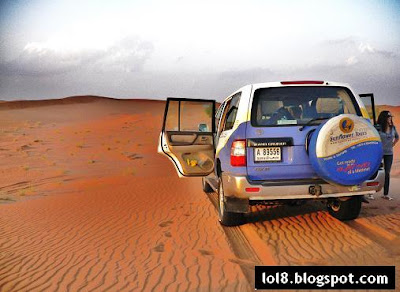 Most people in Dubai drive 4 wheelers, jeeps, MPVs, huge cars, some as big as a tank (maybe they have bigger roads and too much space?). Who could forget the 4-wheels Desert Safari ride in Dubai, the sandy dessert and the beautiful sunset? The 4-wheel I was in could practically move up and down the terrains almost 180 degree at times! A nauseating experience if you had eaten too much before the ride. 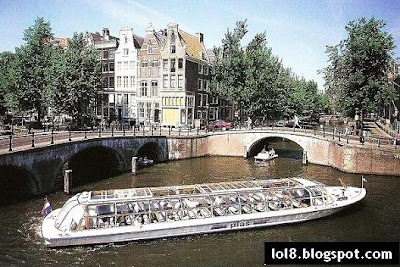 The canal boat ride along Amsterdam, Netherlands, was an interesting experience.... 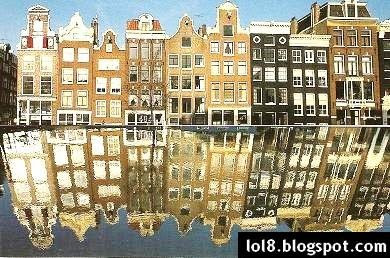 ..... you get to see nice views of quaint houses like these along the river. However, while walking along the streets in Amsterdam city, I personally found the "qi" energy a little suffocating - a rather uneasy feeling. 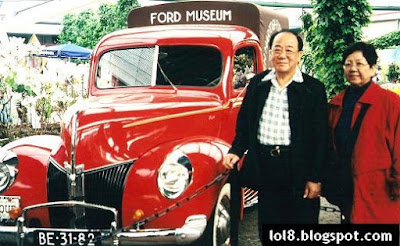 I preferred the outskirts of Holland better, where the windmills, tulips and daffodils were. Spotted this old red Ford car inside Keukenhof Gardens. Hmmm... think I like red cars. 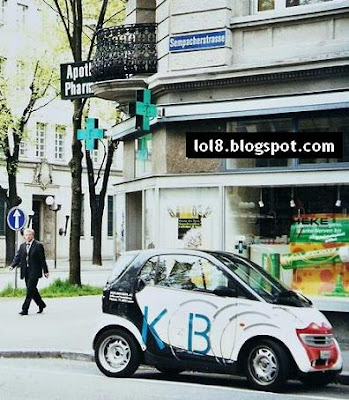 All over Europe, I saw this small tiny car with only 2 seaters which I found so cute looking like a toy. Couldn't remember what brand was this. Snapped this interesting tiny car in Switzerland with red lips in front at the headlights. It was weird seeing big-size ang mohs all squashed inside this little one. And I thought how ironic, the bigger-size Europeans like tiny cars while we scrawny Asians like our cars to be Big and Branded. Perhaps a status symbol of "face" in Chinese context? 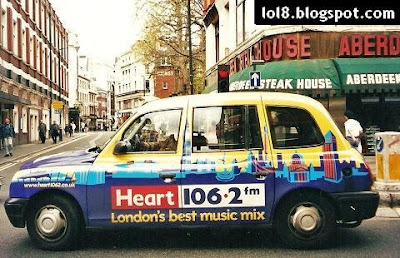 Of course my favourite cab, the spacious London Cab! Taken near Harrods in London, the London cabs could be so brightly painted and colourful. I love the atmosphere of London streets and I was happy strolling and shopping, a very shiok feeling. 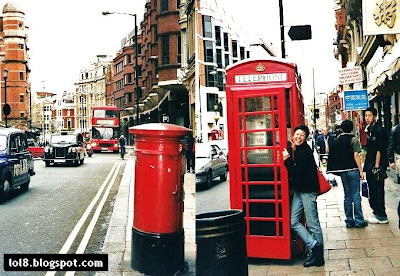 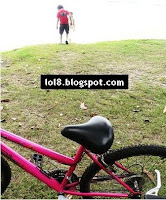 Sometimes I still prefer a simple ride on the bicycle. You could feel the wind and see things better when on the bike.

Gamed for a ride with me on my next destination?

Email ThisBlogThis!Share to TwitterShare to FacebookShare to Pinterest
Categories Travels