If you've noticed, there is a new addition to the right column of this blog, Snaps On The Go, which is my Photoblog. I have always been snapping photos on the go, whether it is on  people, food, the weather, or anything that capture my attention.  I was previously using Twitpic to upload my shots, as it auto posted to Twitter and auto-routed to the widget provided by Blogger which in turn posted photos to my blog here. It was working fine until a few weeks ago.  The widget just refused to appear anymore.
So I decided to explore other options, advanced applications like Posterous and Tumblr, which not only enables me to upload photos, they also let me post a blog entry, a quote or video link etc..I was considering and exploring between both Apps.  Finally Posterous won over Tumblr, by a small margin.

Below I have listed some comparisons of both Apps, which are of importance to me. BTW, I'm not tech savvy, so do not expect a complicated techie review here. This is just my end-user experience. ;D
1. Auto-posting
I want my photos to be auto-routed to Twitter as well as to the website. While Tumblr can only auto-post to

Xanga    and many more....
Posterous won, I need it this feature to auto post to my Twitter, Blogger, and even to Tumblr (if I want to simultaneously maintain both my Posterous and Tumblr pages!).

As I want to upload photos from my iPhone whenever I like, both Posterous and Tumblr has iPhone Apps which makes it seamless and easy to use.  Tumblr seems more flexible as it allows you to post, besides photos, a quote, a video, a blog entry, on the go. Hence it categorises each post.
On the other hand, Posterous in iPhone only allows posting of photos/videos. If you want to write a blog entry, you have to get on the web version of Posterous. I am ok just using this to upload photos as I am already using BlogPress (another iPhone App) to blog if I need to when I am outside. 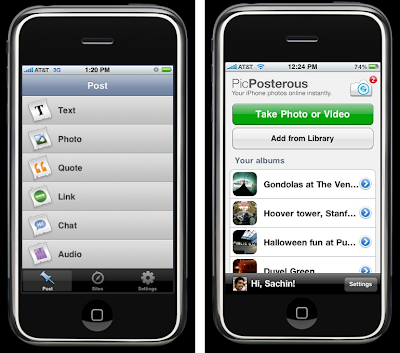 3.  Web Interface
Similarly, Tumblr has a more friendly interface which is more idiot-proof.... 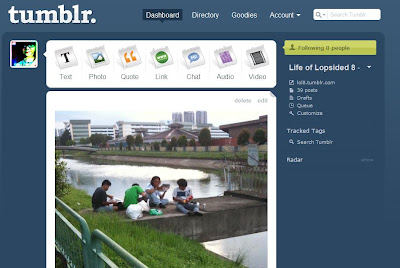 Whereas Posterous, having more features, the interface may prove a little more challenging for the first time users. That said, Posterous' main advantage is you are able to post your entries via EMAIL and they will do the rest. 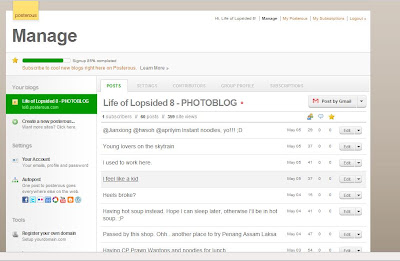 4. Visitor Hits
One reason why I prefer Posterous is it tracks your visitor page views of each photo entry, whereas for Tumblr, you need to install a third party application in order to do that (which seriously, why should I waste time?). Another plus point of Posterous is it uses Google Analytics which I can include my existing ID.

5. Widget
I wanted a widget to be installed in my blog here, to show the photos I have taken on the go.  I found Widgetbox which allows me to customise any widget of my choice. I wanted a vertical banner widgetbox to show all my photos I have taken on the spot to be shown in my blog as well.  Widgetbox allows me to customise my photo widget (whether it is from Tumblr or Posterous) and create the respective HTML codes for all the other platforms. So far so good, I hope this widget doesn't screw up too.

There are many other little things which I did not mention here. For example, there are many available theme templates in Tumblr, while I wish Posterous gives me more choices (although it enables me to customise the look and feel of the given templates).


Also there is an Import feature which I can transfer my entire blog from Blogger to Posterous in the future, if I so wish. It still doesn't work, by the way. Posterous only imported the first paragraph of all my entries.  Anyway, for now, since I am still going to stick to Blogger for this blog, I have settled on Posterous for the Photoblog. Thumbs up for Posterous. 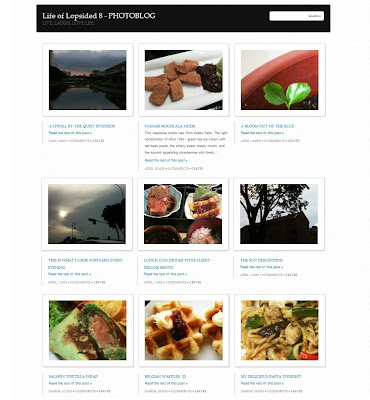 And here, I introduce you to my new Life of Lopsided 8 - PhotoBlog.  If you do not have time to read my entries here (the real deal), you can head off to my PhotoBlog at http://www.lol8.posterous.com  to view my photos and short entries. Rest assured, both the blog and photoblog will not have duplicate entries (90% of the time). I have chosen a minimalist theme template which has a simple and nice layout of my photos.

You can follow me (STUMPBO) in Twitter, to get instant updates whenever I post my shots/blog entries. Happy photo-blogging to me. ;D
yours truly, STUMPBO @ 3:09 pm