In those days when I just started and was new to Tibetan Buddhism, I did not just attend Dharma events from one centre. I attended many teachings, pujas and initiations given by quite a number of Rinpoches or masters from the 4 Traditions of Nyingma, Kagyu, Sakya, and Gelug, who were visiting Singapore. Mostly the programs would be held in different centers or rented premises like Teochew Building and temples. That was the beginning of my Dharma path. I was fortunate to have met so many great masters and to have connected with them. I later began to attend regular teachings and pujas from Amitabha Buddhist Centre (ABC is an affiliate of FPMT) where my root guru is Lama Zopa Rinpoche as well as Gaden Shartse Dro-Phen Ling (DPL is the direct collegiate affiliate of Gaden Shartse Monastery), where my other gurus are the late Lati Rinpoche and 101st Gaden Tripa Rinpoche. Both centres follow the Gelug tradition.
Among all the earlier visiting gurus of the other traditions, one who has touched me deeply is the revered H.E. Garchen Rinpoche. 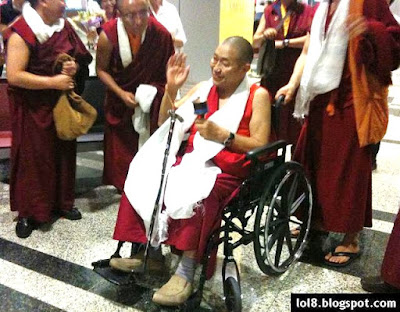 This great lama-master has just landed in Singapore today. I was at the airport to welcome Garchen Rinpoche. Even though I follow the Gelug tradition of Tibetan Buddhism, I always have a deep respect for Garchen Rinpoche who is a Drikung Kagyu lama. As Rinpoche is weak on his legs, he arrived in a wheelchair with his signature mani wheel. He looked to have aged from the last time I have seen him (which was about 2-3 years ago), and he has just had a cataract operation on his right eye. 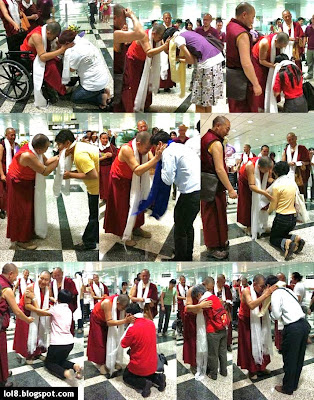 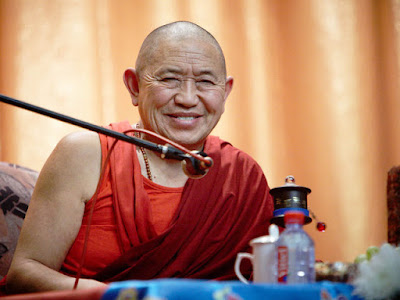 Garchen Rinpoche is among the few great masters whom I remember fondly of.  I had the good fortune of meeting him and receiving his teachings a few times previously when he visited Singapore. Even when he is giving teachings or meditating, or praying, he is always turning the mani wheel. Rinpoche is a very jovial and kind master who is always laughing and is very warm to everyone. I remember the first time when I met him, I was on the stage to receive his blessings, he was standing, he blessed my head with his, held my hands, and gave me a hearty hug with his wide smiles, as though I have known him for the longest time. I was surprised and really touched by this unassuming kind guru.  That is why whenever he visits Singapore, I will make it a point to see him.  The late H.E. Drubwang Konchok Norbu Rinpoche called Garchen Rinpoche the Buddha, already an enlightened living being. 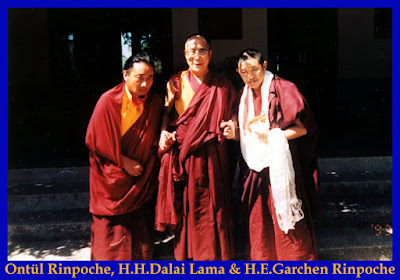 Some background of Garchen Rinpoche.  He is a Drikung Kagyu lama who was Siddha Gar Chodingpa (heart disciple of Kyobpa Jigten Sumgon, founder of the Drikung Kagyu lineage). In another previous life, he was Mahasiddha Aryadeva, the lotus-born disciple of the great Nagarjuna. In the 7th century, he was known as Lonpo Gar, the minister of the Tibetan Dharma King Songsten Gampo.
Garchen Rinpoche was imprisoned for 20 years by China during the Cultural Revolution. Despite practicing secretly and enduring much hardship, Garchen Rinpoche is well known for attaining the profound insight and vast realizations of the wisdom mind, as well as for his great kindness. I look forward to attending his teachings, initiations and pujas. Below is a touching movie clip of "For The Benefit Of All Beings" made on Rinpoche's extraordinary life story. Do watch the English version of the clip in Youtube as I was unable to embed it here.  Below is the mandarin version.
yours truly, STUMPBO @ 2:24 am