When I don't know what to cook... I made Black Olive Fried Rice

I'm sometimes an impromptu person, who doesn't really like to plan where I'm going or what I want to do. But on the spur of the moment, when it hit me and I've decided, I'll be very fast to go ahead to do that something. Very spontaneous. The same goes to what I want to eat or want to cook. I don't plan in advance what I'm having/cooking for dinner (unless I'm entertaining guests). 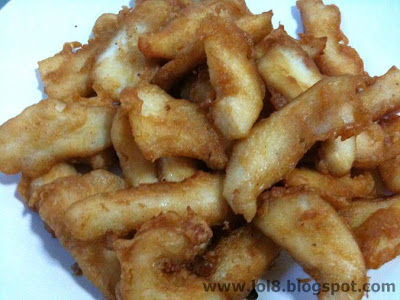 So it was one of those days when I have no slightest idea what to cook for dinner. It usually depends on what I can find in the fridge. I've got some white fish slices and prawns in the freezer, and I've got a pack of fried seafood powder mix mom bought but still have not tried. So I marinated the fish slices with some sesame oil, seafood marinate, light soya sauce, little hua diao wine and left for about an hour. Then I just mixed the fried seafood powder with a little water and it became a gooey paste.  With hot oil in the wok, I coated the fish slices one by one into the paste and immediately dip them into the wok.  They are cooked in mere 3-4minutes.  This was the first time I  bothered mixing the paste. Usually I would buy ready marinated fish/chicken nuggets. I must say the powder mix was quite good, they tasted very fluffy inside, just about crispy on the outside, and fresh. 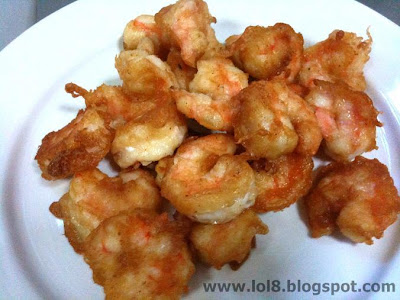 I did the same for the prawns.  They tasted very good as well. At first I was supposed to cook plain rice to go with both of these fried fish and prawns and some other dishes.... but I was at a loss again "what other dishes to cook?" 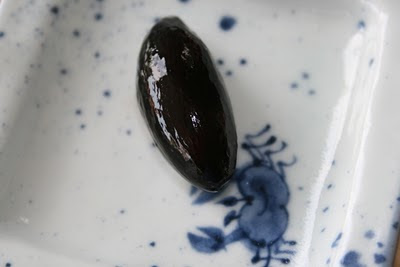 I have some leftover rice and I cooked some more as it was not enough. I mixed both the leftover rice and cooked rice together and left to cool. Then I pit the olives from the seeds and chopped the olives into small pieces. Heating oil in the wok, I add chopped garlic and dried shrimps (hae bee) for a quick stir. When they are fragrant and golden brown, I threw in the chopped black olives. I also added 2 two eggs and mixed them together with the rest. Stir fry them till they are dry, before adding the rice. I added a little light soya sauce and pepper.  I was supposed to add fish sauce, but I ran out of that. I used a little of spicy steamed fish sauce from a bottle I found and mixed little water before mixing them into the rice. Continue to stir fry the rice. 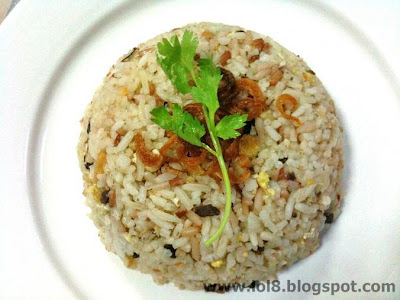 This is how the Black Olive Fried Rice looked like.  I added fried shallots and cilantro on top. You can also add a wedge of lime and cucumber on the side if you like. 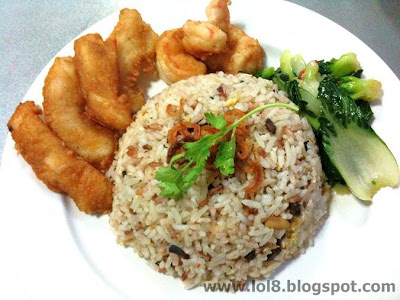 Next I adorned the fried fish slices and prawns which I deep fried earlier, as well as some stir-fry Nai Pak veggies (with dried shrimps and wolfberries) as a side. Don't you think this looks absolutely delicious? Well, it did, accordingly to my family. :) 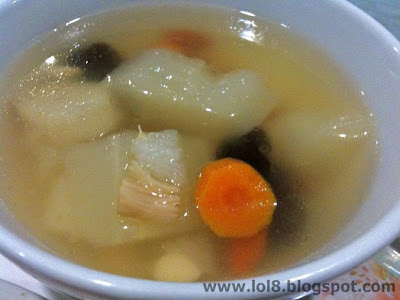 Not forgetting the soup..... I find cooking soup is the easiest as you throw all the ingredients you want into the pot and let it boil for 2-3 hours. This was some radish-gourd, carrots, dried scallops, red dates, nan xing-bei xing, wolfberries and spare ribs, adding some salt and double boiled. The soup went well with the 'dry' fried rice set. 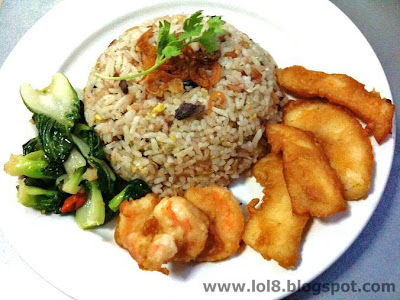 Hence this was the dinner set I came up with one of the days when "I don't know what to cook".  This was my first time cooking black olive fried rice. Sometimes a little spontaneity means exploring unchartered boundaries.
yours truly, STUMPBO @ 12:27 am