A dream of Guru Rinpoche Padmasambhava 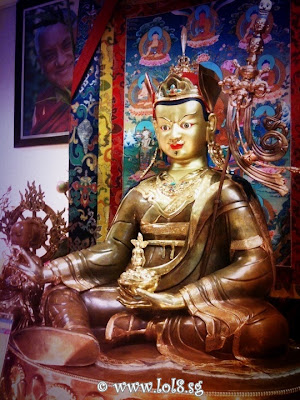 A few days ago I told a friend of my wish to invite a very big statue of the lotus-born Guru Rinpoche Padmasambhava 莲花生大师 into my home one day if I am able to afford it and if I have the good karma to. This is because I simply love Guru Rinpoche alot. Last night, I dreamt of Guru Rinpoche again, although it was brief and vague.

In the dream, I was outside walking along a very misty road. I saw some old houses. Everywhere seemed grey and dull in colour, foggy and blur but the air was crisp and fresh.  Somehow, as I strolled along, I was looking or searching for something. In my mind, I was thinking of Guru Rinpoche and supplicating to him, "Guru Rinpoche, please can I invite you to my house?"

Then I saw an old house with its door opened. I entered it and standing at the entrance, when I looked inside the house, there was a golden statue of Guru Rinpoche Padmasambhava, mounted on a round pillar, right in the center of the room. The other times when I dreamt of Guru Rinpoche, he was in very colourful resplendent robes. This time, it was a brilliant gold, which was a stark contrast to the old and dull room. Guru Rinpoche was emanating a shining blinding light in the center of the room. With my palm closed, I walked nearer to him. The statue was less than a metre tall. I bowed my head and lowered it to touch the extended right foot of Guru Rinpoche for his blessings. End of dream. I think I got the answer to my earlier question.

I had recently offered a blue rosary mala to a huge statue of Guru Rinpoche in a holy place and placed it on his left hand in which he is holding a skull-cup brimming with nectar, containing the vase of longevity that is also filled with the nectar of deathless wisdom and ornamented on top by a wish-fulfilling tree.

Because I feel so connected to Guru Rinpoche, I embrace the daily practice of reciting Guru Rinpoche's Seven-Line Prayer (invoking him to come) embedded in a short sadhana and faithfully chanting his mantra many times. I cannot explain more the immense benefits of this practice as I had previously blogged about. In fact I am trying to accumulate a certain number of the mantra.

Come to think of it, it doesn't really matter whether I have a statue of Guru Rinpoche in my home anymore. To me, he is always there very close to my heart. Om ah hum vajra guru padme siddhi hung!
yours truly, STUMPBO @ 12:08 am