We had a second round of birthday celebration for Grandma's birthday within our own family. Sis had missed the earlier celebration because she had something urgent and unfortunate that cropped up the last minute. So she wanted to make it up to Grandma by buying her lunch on her actual day instead.

We went Crystal Jade Kitchen because Grandma usually prefers Chinese food. Besides my family, my 2 nine-year-old twin cousins also joined us, making that 10 of us in 1 table. 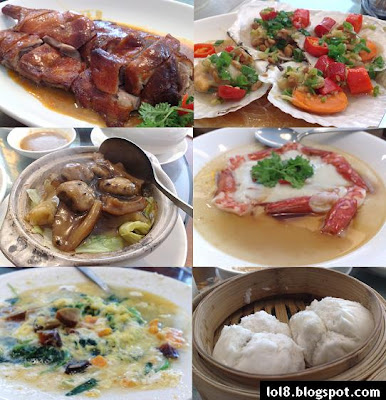 Crystal Jade had some double deals like the above, buy two items for a lower price. So Sis ordered 2 sets of the double deals to go with white rice (Grandma must eat rice and veggies) and also called lots of dim sum. From clockwise, it was the roasted duck in curry sauce, scallops served in the shells, prawns in wine and egg white, char siew buns, spinach in eggs and century eggs (it looked gooey but it tasted real good), sea cucumber with chinese mushrooms and lettuce.
I did not take photos of the dim sum because I was busy managing the 3 rowdy boys who could not sit still. The bill came up to about $180+. I thought it was rather expensive even though there were 10 of us, but considering 4 of them are kids who only ate fried rice and some xiao long bao, that leaves 6 of us adults accounting for most of the items (if minus the kids' portions, that meant each adult's share was $30!!). Expensive! Thanks to Sis for the treat!

Had hard time cajoling kids to eat more other than fried rice. They learnt how to eat xiao long bao and they loved it (biting the wanton skin, sucking the soup and then munching the meat), so we ended ordering 4 steamers of xiao long bao! However, I think the kids were happiest when they later had McDonalds ice cream cones and new toys. See their monkey faces.

Few days ago when we were at Grandma's high tea, a cousin of mine (in his 20s) asked me where was Sis (because she was absent). I knew he would ask. I said she had a business appointment something urgent that cropped up (of course I could not say the actual unfortunate reason). This insensitive bloke did not relent and kept asking "why, why, why she is not here?" at least a few times eventhough I kept telling him the reason. Almost wanted to give him a tight slap but I kept quiet.

I knew what he was thinking. Last year at Grandma's birthday dinner, one of our other cousin (whom we were not that close with - that's another story) did not turned up and my this cousin was also behaving the same, complaining and grumbling and saying "what could be more important than Grandma's birthday?" even though that cousin's parents were sitted just next to his table. I wondered could they have heard him. At that time, I had to tell him in exasperation, to "leave it".

So this time, he did it again. But since it was about Sis, I could not "leave it" sitting down (hence this posting). Thought it was rather unfair to Sis. If anyone had to criticise her, my this insensitive cousin should be the last one to do so.

First of all, he has no respect for his eldest cousins (Sis and me) who are way older than him, and we both doted him dearly like a brother. At times he did not "give face" to even his parents and aunts too. I have not chided him for his other actions. Who is he to question us. Even Grandma was understanding and did not say anything. If he really wanted to know the real reason, he could have called Sis and ask or he could have asked me in a more private moment and not in front of everyone. This is what I call absent EQ. So its it is true that those born in the year of the rooster are stubborn and always like to argue till they win. Well, I treat it as just empty vessels making the most noise.

Secondly, I think Sis dotes and loves Grandma much much more than any of

our younger cousins because she spent 6 years of her life under Grandma's care. She stayed with Grandma and they have a special and close relationship. She felt very bad not being able to attend that day, that was why she made it up. She visits Grandma often in normal times. We bring Grandma with us in our holidays abroad. Once, Sis bought a wooden prayer cabinet for Grandma (which was eye level), because she could not bear Grandma climbing high up everyday to put the joss sticks as the existing prayer board was elevated high near ceiling.
I think we need to have a conscience in whatever we do. As long as we ourselves know how much we love Grandma, it is enough and there is no need to prove to anyone and even more so only during her once-a-year birthday. We should do it THROUGHOUT the year and not just on her birthday or on mothers' day. In daily life, we are so smart and quick in pointing fingers at others. I should have asked my cousin (in front of everyone).... "so what gift did you give Grandma? any ang pow?"... but I kept quiet. I see this incident as a case of the pot calling the kettle black.
yours truly, STUMPBO @ 11:55 am