At around noon today, I received news from DPL (Gaden Shartse Drophenling) that one of my most respected gurus, His Eminence Kensur Kyabje Lati Rinpoche, has passed away early this morning at 5:25am, 12 April in Dharamsala India. Lati Rinpoche was 88 years old. 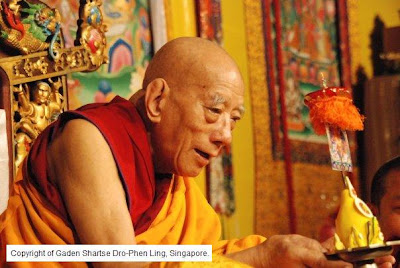 Rinpoche passed away peacefully in his residence unexpectedly. He was not hospitalized. This morning when Rinpoche woke up, he did his usual prayers and told his personal assistant, Sopon-la, he wanted to take his bath. This was unusual as Rinpoche normally had his breakfast before his bath each morning. Prior to that, he had also circumambulated His Holiness the Dalai Lama's temple. (Below photo, Lati Rinpoche with his personal assistant for decades, Sopon-la). 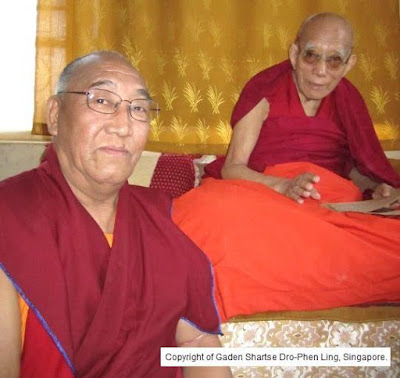 After his bath, Lati Rinpoche instructed Sopon-la to leave his room, and said: "it is time for me to go". With that, Rinpoche entered into clear light meditation. Rinpoche's body is currently still warm and in the meditative state. This is a sign of an Enlightened being. We do not know how long Rinpoche will be in this state, can be 3 days, 7 days, 21 days etc... As and when his consciousness leaves him, Rinpoche's body will then be brought back to Mundgod, his monastery, for the fire puja (cremation). Arrangements are in the process to construct Rinpoche's stupa which is expected to house his relics when the time comes. Rinpoche's monastery, Gaden Shartse, will be making offerings to the 3 great monasteries on behalf of Lati Rinpoche's name, which will be to Gaden, Sera and Drepung monasteries. The number of Sangha in these 3 monasteries alone totals 10,000 monks. Lati Rinpoche was a great, deeply respected Gelug master and one of the most senior Buddhist teacher in these 3 monasteries. All the Sangha will be conducting prayers for Rinpoche in their respective monasteries and many more are expected to attend his fire puja as well as to pay their last respect to Rinpoche. 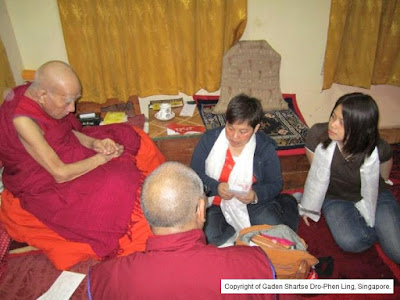 I am extremely sad and stunned when I received this news of his passing. In fact, Mama Karen and Jamie from DPL had just came back from visiting Rinpoche in India about 3 weeks ago. Rinpoche was looking very healthy and happy. Rinpoche was to have been due to visit Singapore this coming June for teachings. It is sad because we have just lost a great Bodhisattva in this lifetime. 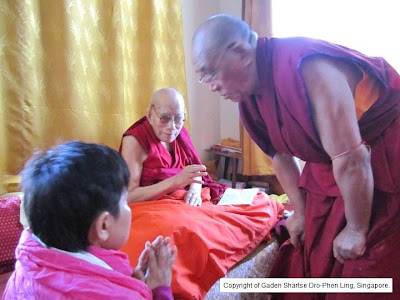 Lati Rinpoche was recognized as a reincarnation of a great practitioner and became a monk at the age of 10. He was the Abbot Emeritus of Gaden Shartse Monastery in Mundgod, South India. Belonging to a very rare class of scholar, saint and high practitioner who completed his training in an independent Tibet, Rinpoche continued to spread the Dharma by teachings at various monasteries and schools, after he followed His Holiness the 14th Dalai Lama into exile in 1959. In 1964, Rinpoche arrived in Dharamsala, and was subsequently appointed as Spiritual Advisor to His Holiness the 14th Dalai Lama. Rinpoche served His Holiness faithfully till today. Rinpoche’s contribution towards teaching and spreading the Dharma was widely recognized by all, and was deeply respected by many devotees all over the world. 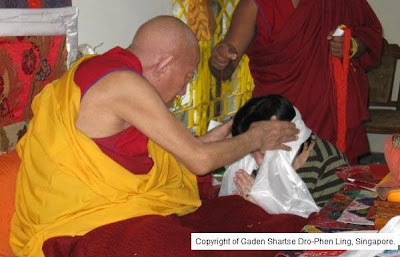 This morning I suddenly woke up at around 6am, earlier than my usual time, before falling back to sleep again. I wonder was it some kind of premonition as I was feeling rather edgy for the past few days, but could not pinpoint what was troubling me. For the past one or two weeks or so, I have been jolted awake suddenly at around 5am to 6am every morning. 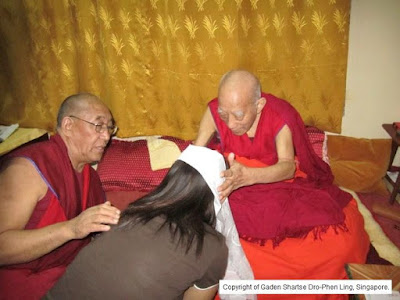 I am thankful and grateful that I have the immense good fortune, good karma and merit to have met Lati Rinpoche in this lifetime, to receive his teachings and blessings. May this connection and affinity with Lati Rinpoche, a great practitioner, continues for many more future lifetimes. 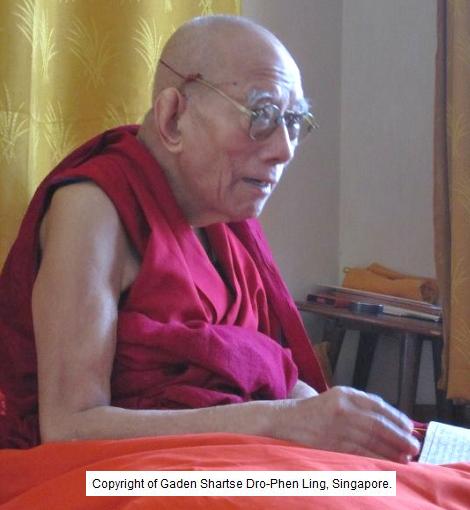 DPL will be conducting a 3-day Guru puja and tsog offering in Singapore for Lati Rinpoche from 12-14 April at 7.30pm in the center. Many other centers, monasteries and students around the world will be conducting prayers for Rinpoche everyday during this period.


Rinpoche's monastery, Gaden Shartse Monastery in South India is conducting a 7-day GURU PUJA & TSOG OFFERING for our precious guru Lati Rinpoche. If you would like to make an offering, please contact DPL at 65-63449521 / 65-63420806.

We pray for Rinpoche's swift rebirth, may he return as soon as possible, to turn the Dharma Wheel and to benefit all sentient beings, and for us, his students to be able to meet Rinpoche lifetime after lifetime until we achieve Enlightenment, for the benefit of all beings. Om mani padme hum!!! __/\__

Above were the last recent photos of Lati Rinpoche, copyright and courtesy of Jamie from Gaden Shartse Drophenling.

Below photos copyright of Life of Lopsided 8 blog. In this photo, Lati Rinpoche was blessing my niece when we went to send him off at the airport in Nov 2008. 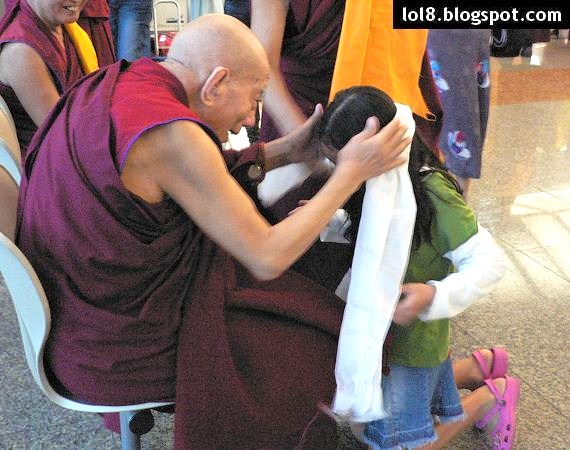 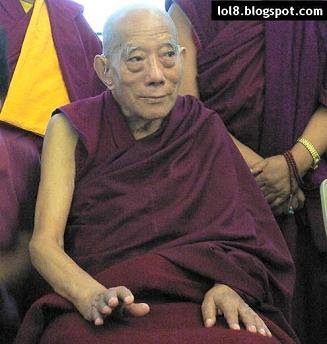 A clip from Youtube, photos of Lati Rinpoche in his younger days as well as with His Holiness the Dalai Lama.