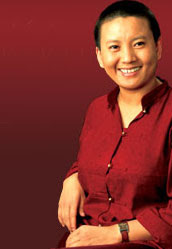 Yippee! Many Buddhists and non-Buddhists in the circle already know that Ani Choying Dolma is coming to Singapore for a concert. I may or may not be able to attend this concert due to some reasons. But I hope I can make it by then.
She’s been called the Singing Nun from Kathmandu who is  an international performer bringing Buddhist mantras to the world, spreading the peace in those ancient vibrations with her beautiful interpretations and amazing voice.
Ani Choying Dolma in Concert
Sun 24 October 2010, 7pm
Jubilee Hall, Raffles Hotel, Singapore
$40, $60, $80
Ani Choying Dolma is a Buddhist nun and musician from the Nagi Gompa nunnery in Nepal. She is known in Nepal and throughout the world for bringing many Tibetan Buddhist chants and feast songs to mainstream audiences. She was born in 1971 in Kathmandu, Nepal to Tibetan exiles. She decided at an early age to pursue monastic life, and was accepted into the Nagi Gompa nunnery at the age of 12. For a number of years, the monastary's resident chant master (who was trained directly by the wife of Tulku Urgyen Rinpoche) taught Ani Choying the music that she is famous for performing. She is an exceptional singer, admired by fans throughout the world. People are moved to tears by the plaintive purity of her voice, and the haunting melodies of her ancient songs and hymes, passed from master to pupil for many centuries. Ani Choying has always believed that nuns have a great desire and potential to make the world a better place, if only given equal opportunities.

"Inner Peace" is one of my favourite of her CDs for  beautiful buddhist chants because her voice is so soulful and healing. Below is one of the songs - The Great Compassion Mantra 大悲咒- titled "Namo Ratna Trayaya". I love this mantra so much that I can recite/sing it by heart. I always chant this wherever I go. It's the first mantra that comes to mind. Listen to this...

"To recite it a full 5 times in one evening is to wipe away your heavy offenses of hundreds, thousands, tens of thousands,tens of thousands of millions of aeons of birth and death". - The Dharani Sutra.
"Instead of cursing the darkness,
why not light a candle yourself?
Never give up."
Ani Choying Dolma
yours truly, STUMPBO @ 10:59 pm