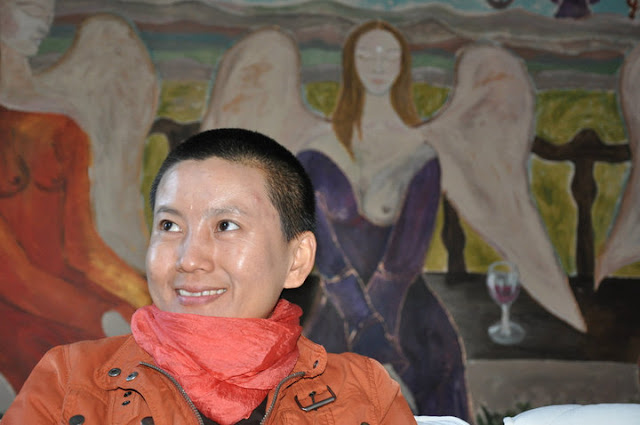 Spent a wonderful blissful evening with a pretty dakini (or angel) on Sunday. The popular Singing Nun from Nepal (as she is known worldwide as), Ani Choying Dolma was in town to give her first concert in Singapore - Mantras From The Heart and I was star-struck. If you know me, I never really did go ga-ga over any pop singer, but with Ani-la, I was swept away (literally) to another dimension (yes, I am unconventional). It was so different and I wish I could explain why. Back in 2007 when I walked into a CD shop selling Buddhist music, I heard a melodious voice singing and was very touched.  I asked who the singer was, and it turned out to be Ani Choying Dolma and the CD album was "Inner Peace". I immediately bought it. And it is still my most favourite Buddhist album. 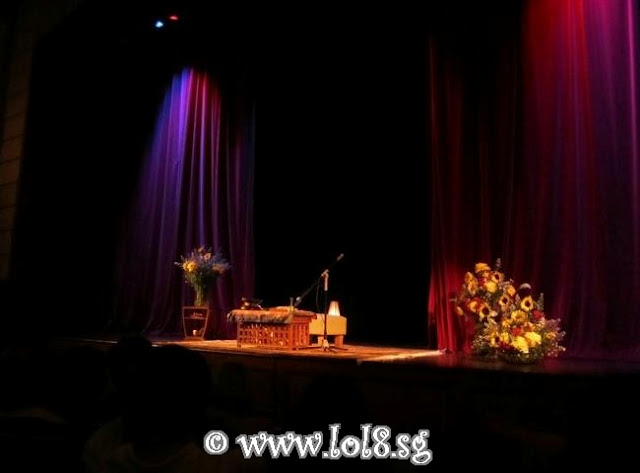 The simple stage setup. Who needs a band or complicated musical instruments or elaborate performance when you only need to hear that voice? No photography or recording was permitted. Ani Choying started the first 2 mantra songs which I am most familiar with - Namo Ratna Trayaya (Great Compassion Mantra or 大悲咒) and Green Tara. I know her heavenly rendition of these 2 mantras had made quite a few people teared and it was such a wonderful awakening. It was this song Great Compassion Mantra that I first heard in that shop. It is this long mantra that I first learnt to chant by heart from her rendition and which I chant most often still. 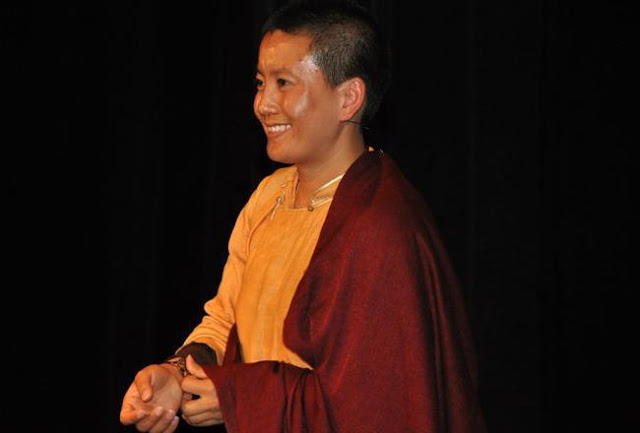 Ani-la said "In Buddhist culture, before you do anything, the development of your proper attitude is very important and for that, I felt Avalokiteshvara (Kuan Yin) would be the best to start off. By reciting this mantra it would help one to cultivate one's own compassionate qualities to an extended level. Not only can one heal and liberate oneself but one would also be able to heal and liberate others as well". 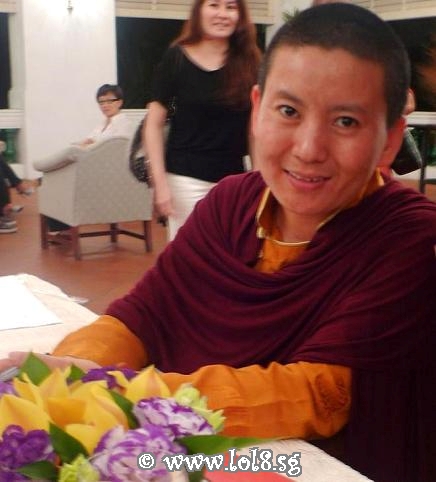 After the concert, we got a face-to-face opportunity with her.  I finally met my idol. Ani Choying is such a very humble and composed nun. She said "Melodies have the ability to please the Divine, humans, animals and scientifully proven, even plants grow more beautifully when they hear music. Lord Buddha's voice was so melodious when he was teaching that even animals were attracted to him."  So was Ani-la's voice. 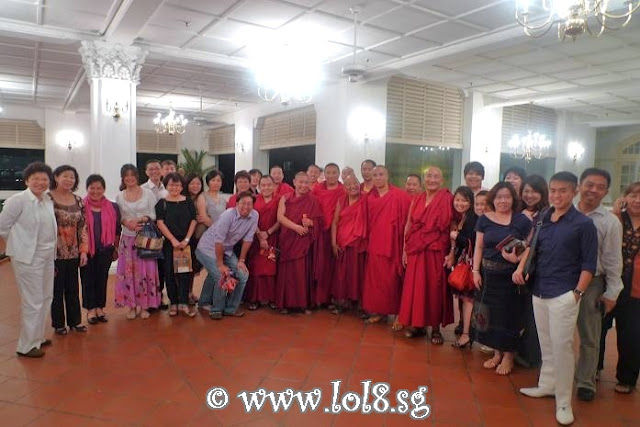 A large entourage of monks and members from Gaden Shartse Dro-Phen Ling turned out to support Ani Choying Dolma. Everyone looked so happy. 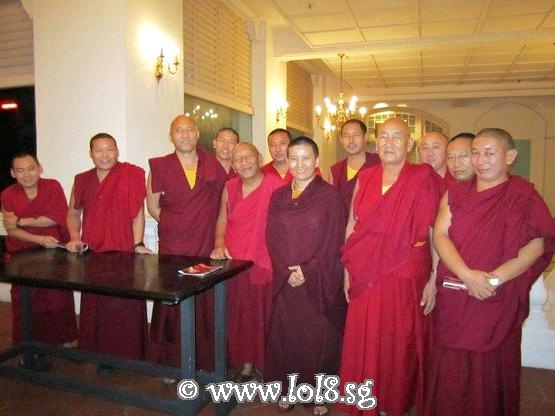 We requested Ani Choying for a photo with the monks. I heard the monks love her singing so much, but they may not necessarily be able to afford her CDs and they have not met Ani Choying in person before. So I thought it was an excellent applaudable gesture of Dro-Phen Ling to give these monks a treat before they return to the Monastery in India. 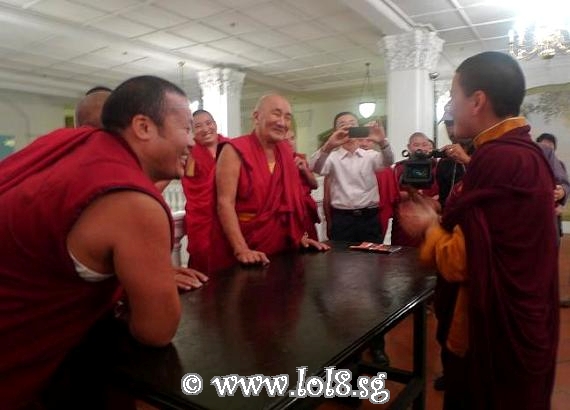 Ani-la had a brief chat with the Geshes and monks of Gaden Shartse Monastery, thanking them for coming. The Sangha community (at least the many monks and nuns I have met before) is so tightly-knit, helpful, with no ill intentions and it's all very heartwarming. Through example, in their own way, they embody what the exact teachings of the Buddha should be about. 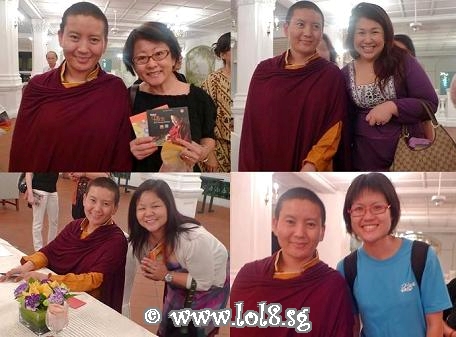 Ani-la was very obliging and autographed all our CDs and posed with us a number of times. My friends and I managed to have quite a few personal shots taken with her. My attempt of taking one photo failed, it was blur and she said, smilingly: "so you want to take a photo of me and you, and by you?" 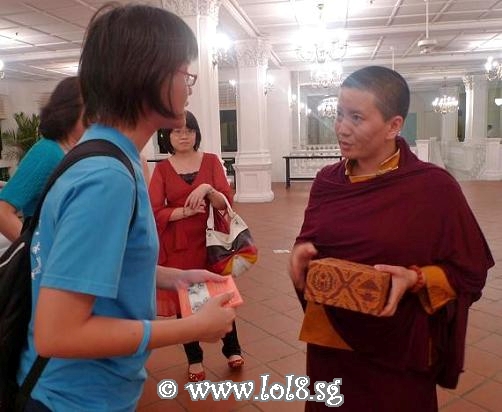 A friend was asking Ani-la questions about the Dharma. 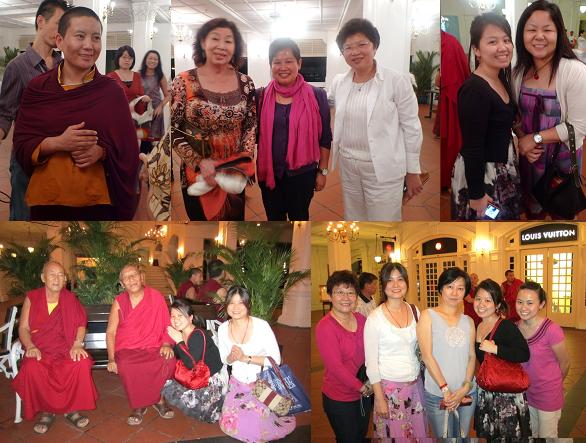 The rest of the DPL members were busy taking photos. 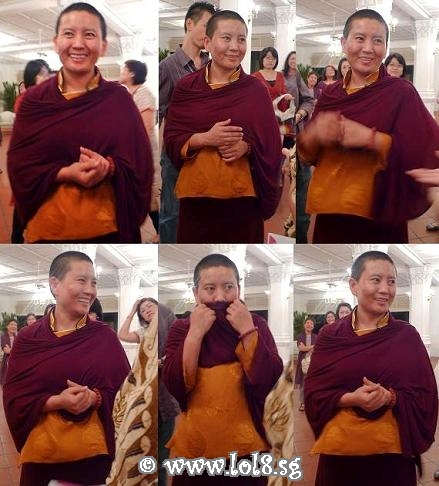 She gave a beautiful premiere of the Prajnaparamita, the entire Heart Sutra, singing it in Sanskrit, for the very first time to the audience last night. We were indeed very fortunate. Perhaps my personal favourite of her renditions of all the mantras last night, the one that gave me the deepest impression, was Om muni muni, the mantra of Shakyamuni Buddha, which I was hearing for the first time from her. I love it so much because it was so simple yet so powerful and touching that I was almost tearing.  I will see if I can get a clip of it up here. Last night I slept at 1am and woke up at 3am, by the tune of that mantra, still stuck in my head the whole night. Despite recovering from a cough, Ani-la's voice blown us away. May everyone in the world be able to hear her rendition of  all the mantras and be healed. 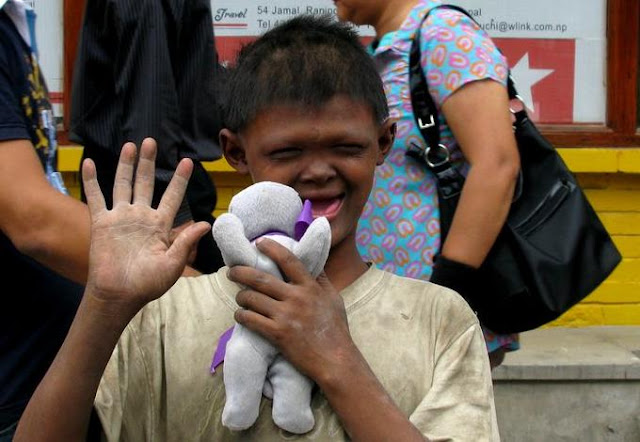 Small things that matters - the smile of a child after receiving a small gift from Ani Choying Dolma in a street of Kathmandu. Ani Choying said that simple, little things in the world can make people happy. And we all have the common desire to be happy. Nowadays to fulfill these wishes, we do so many different things in life which sometimes make sense and sometimes do not.  We have so much convenience in modern times but we do not have time to enjoy it. We are very intelligent and have high education qualifications  in the academic sense but exactly how much of this "sense" has been developed? She quoted a high master, "We humans are so intelligent, we have gone to the moon and come back, but we have so much difficulty in crossing the road to meet our neighbours. We have so much information in the computer but less communication with human to human. It is happening because we are believing in something that is not the cause for happiness. All we need is so simple, and that is to develop respect for other humans in order to be happy". 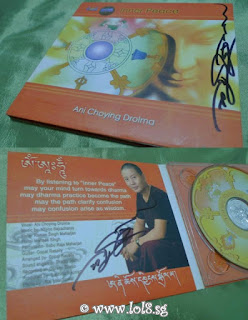 For that, Ani Choying has set up schools and nunneries for the little girls in Nepal so that they have equal opportunity to study. The proceeds of her concerts all go into charity helping the nuns, the poor and animals.  Her parting words, "In order to be happy, there is no need to be all or nothing. It can be simple things. As for me, as I am blessed with the ability to sing, I share with others by giving concerts, and that make people happy".


My autographed CD of that very first CD I bought, Inner Peace. The volunteer told me for this album, Ani Choying usually prefers to sign on the front cover. Not only did she signed on the front cover, I also requested her to sign for me on the inside cover with her photo too, because printed on it was a beautiful dedication:
"By listening to Inner Peace,
may your mind turn towards Dharma,
may Dharma practice becomes the path,
may the path clarify confusion,
may confusion arise as wisdom."

This is the Namo Ratna Trayaya I always chant. Before she left, I told her to please come back again and she gave me a bright yet shy smile, "Ok".  I believe she will be back very soon.  Thank you for coming to Singapore, Ani Choying. May all your wishes and projects in caring for the nuns and the unfortunate ones succeed immediately.

PS. Just realised after posting the above mantra, today is the Renunciation Day of Kuan Yin (Avalokiteshvara). How apt!  May all receive the blessings of Kuan Yin.
yours truly, STUMPBO @ 7:30 am