I dreamt of a white Kuan Yin!

I am a little overwhelmed with the dream I had at dawn today. Yesterday 1 Oct was the first day of the 3 days Grand Healing event by the Great Healing Lama, His Eminence Kangyur Rinpoche, 大医活佛.  After 2 pujas in the day, in the evening Rinpoche bestowed on us a Blessing Initiation of a special Chenrezig, which was the Kuan Yin Who Liberates From The Lower Realms, 恶趣遍解脱观音.  This was the first time I received initiation of this particular Kuan Yin, specially instructed and chosen by Rinpoche. I believe Rinpoche has his own reason for choosing this initiation of this particular Kuan Yin. A few months ago I was a little sad that I had to miss the initiation of 1000-Armed Chenrezig conducted by Dagyab Rinpoche. So after the initiation last night, I felt really blessed and happy that I finally had a chance to be bestowed this initiation as I feel I do have the affinity with Kuan Yin. 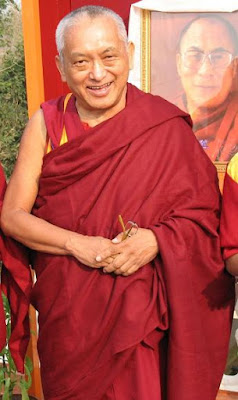 This morning at dawn I had a dream. I cannot recall the first part of the dream, only the second part. I was in a place which looked like a longish room without windows, and the floor was carpeted. The room was empty, without any furniture at all.  I entered this room and thought it was an office (but strangely with no furniture).  Suddenly a small group of people appeared out of nowhere, and immediately, appeared at the door was my precious root guru, Lama Zopa Rinpoche!  Everyone in the room clasped their hands and bowed, greeting Rinpoche. In the dream, I also did the same, very excited to see my guru again! I was at the furthest corner of the room.  As Rinpoche walked slowly in, greeting each and every person who went forward to him. In typical Lama Zopa Rinpoche's style, he blessed each and everyone who offered him the khata (white scarf) and blessed by pressing on our crown and chanted many mantras into our ears. It seemed like ages to me as I was waiting for my turn, because he blessed each person for a long time. Finally my turn came, I seemed to be the last one in the room. Rinpoche smiled as I greeted him with khata and bowed head "Hello Rinpoche!". He replied "How are you?" and proceeded to bless me, touching my head, and chanting many mantras to me. His chanting is music to my ears.

After he finished, I suddenly noticed a door behind me, with a staircase going down. I am not sure where that staircase was leading to but in the dream I somehow knew it was an exit and Rinpoche was heading there. I followed behind. The ceiling seemed quite low at the staircase, and just as Rinpoche walked down a few steps, I saw that he was almost touching the slant ceiling which had something on it. I shouted "Be careful, Rinpoche!" I saw the something which was white, seemed to be moving at the bottom which was touching Rinpoche's head. Tilted my head, I realised it was a very white statue with a lotus seat at the bottom. I looked higher up, I realised it was Kuan Yin who is all white, except for the trimmings of her robe being maroon in colour. She was slightly taller and bigger than a human. This photo is the closest I could find from the internet that most resembled what I saw in the dream. 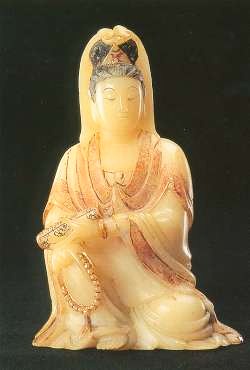 In the dream, I gasped in awe and quickly clasped my hands. Rinpoche was laughing, and trying to explain to me, speaking in a very fast and incoherent manner. He was gesturing and pointing to the foot of Kuan Yin on the lotus which was above his crown.  "You see....... this is Kuan Yin.... (he pointed to the lotus above his crown).... on top of me.... (he pointed to the top of his head)..... this is blessing......it's ok....". Rinpoche talked very fast, and gesturing me to go down the staircase with him, and pointed to the crown of my head and instructed me to tap my head upwards to the foot of the very white Kuan Yin.  Then I woke up.

As I laid on my bed at 7am, still in a blur sleepy state, I realised I had a very good restful sleep although I slept at about 2am. I was feeling a strange wave of calm. Then I suddenly recalled I had this dream. I became fully awake and totally totally totally amazed, because I just received the blessing initiation of Kuan Yin from the Healing Lama the previous night!

I am very grateful to the Healing Lama, Kangyur Rinpoche who compassionately gave this initiation, and very thankful to see Lama Zopa Rinpoche in my dream again! Looking forward to the last day of the Grand Healing event tomorrow.  Do not miss this  precious and rare opportunity to meet and to receive healing and blessings from an authentic high lama.  May all be auspicious! Om mani padme hum!!!!
yours truly, STUMPBO @ 11:58 pm