What a blow job!

I received an email from my friend, regarding this below article. 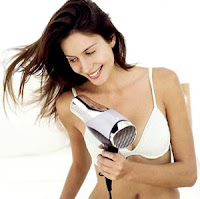 Not long ago a friend took her ten-year-old boy to my house looking for my wife, saying that her child had hiccups all day long. The child was very uncomfortable and unable to eat at all. After she checked, my wife said there was a muscle spasm in his diaphragm. Without hesitation, she took out a blow dryer, turned on the power and started blowing at the boy's stomach. About 10 minutes later, the boy burped and felt relieved. We were surprised that this thing can do the trick. But my wife just smiled.

A few days later, I had a stiff neck when I woke up in the morning. I could hardly turn my head. I recalled my stiff neck problem was treated a few times by acupuncture and cupping when I was younger. I asked my wife for the similar treatment. She said there weren't any needles at home nor any suitable small jars for cupping. She just took out a hair dryer. I couldn't help laughing. Again? This thing can cure stiff neck too? Amazing!

She blew on my shoulders and my neck for about 15 minutes. My neck was really loosened up. I could turn my head now. Later in the evening, she repeated that on me once more. The pain in my neck was significantly reduced. I crowned her the "queen of blow drying".

She explained that this was inspired by the method people used in the old days. In hospitals, with all the modern equipments we have, doctors do not need blow dryers. Back in the old days, in rural villages especially, doctors were poorly equipped with medical supplies. So they came up with other means to treat patients with common pains.

Suddenly I realized this is the thermal effect on pains with the heat generated by a blow dryer. Modern physiotherapy equipment such as electric, laser, thermal, ultrasound and others can easily generate heat for effective treatment. They are, of course, more powerful than a blow dryer. However, when they are not available, using a blow dryer to generate heat will also work, temporarily at least, on common pains such as back pain, muscle spasm, stiff neck, leg cramps, etc. It is easily accessible and easy to operate as long as there is electricity. The blow dryer is really amazing. Try it. Hope it works for you too.