Over the weekend, I met up with my buddies for dim sum in Wah Lok again. Then late in the evening about 8pm we were at Raffles City Shopping Mall.  We chanced upon the Old Hong Kong Kitchen restaurant. Apparently they are newly opened and in operation for just 3 weeks. 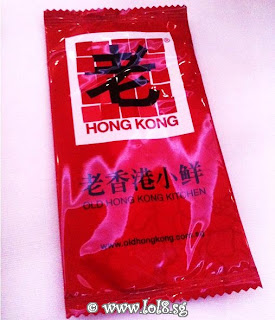 When we saw it was Old Hong Kong, we were pretty excited because we always frequent its other branch in Katong, the Old Hong Kong Tea House (Cha Chan Teng) which is 24-hour. The Katong branch is one of our favourite haunts, as they have a large variety of dishes. The atmosphere is casual dining and all its service staff wear bright orange polo-tees. My friends and I were there often in the middle of the night. See my earlier post. 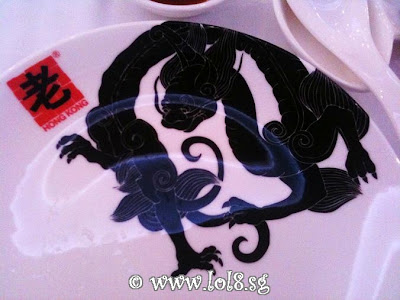 However this new branch has gone upmarket, which is a typical fine dining Chinese restaurant with its exquisite decor, expensive-looking chairs and cutlery. We thought we would just give it a try, since my buddy, Rich Friend, likes cantonese dishes. 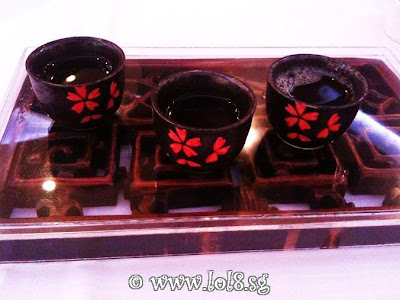 These were plum tea served in chinese teacups, complimentary. We felt it was too sweet for our liking and did not finish the tea. Even though I had my camera with me, I was not in the mood to use it. These photos were taken from the iPhone. 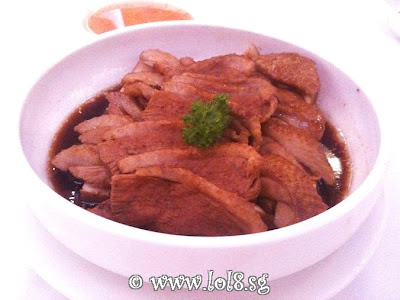 This is the Sliced Marinated Duck Meat with Tau Kwa underneath, and this dish came about 20 minutes after our order. We were a little shocked that the portion was so little. It came in a small saucer, just a few pieces of the duck, and even the beancurd was thinly sliced. We could not remember the price, we had thought it was $10. Even then it was not worth the price. Rich Friend said the meat tasted like they were cold and just heated up, no aroma. When the bill came it was actually $18, which gave us an even worse impression. 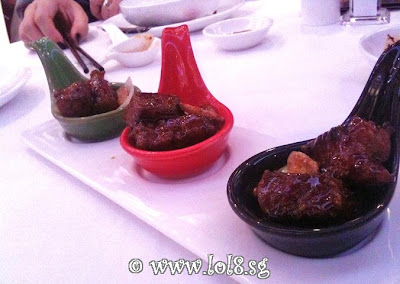 Lo and behold, we waited for almost an hour before the next dish came. This was the Sauteed Diced Beef with homemade sauce.  I do not take beef so my 2 friends ate this. They said the beef was too sweet for their liking. Perhaps it was due to the sauce. The dish costs $10. By now I had given up on taking photos. The rest of the below photos were taken from the internet. 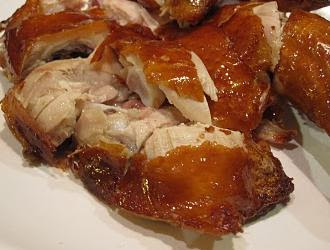 Next was the Crispy Chicken. We had wanted to try and ordered another shredded chicken dish. The thing was, it took them about 30 minutes after our order to inform us that the shredded chicken was already out of stock. When we asked why we were not informed earlier when we were ordering, the captain explained that it was only when the dish was to be prepared by the sou chef in charge that they found out there was no more stock. And it took them 30 minutes before they informed us. Is this an acceptable explanation?  Anyway this dish of crispy chicken costs $16, 'slightly cheaper' than the duck meat and slightly bigger in portion. It tasted pretty normal. 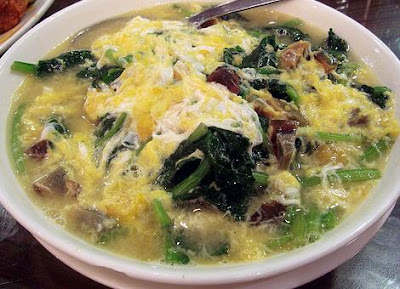 Poached Spinach with salted egg and century egg was ok, a tad too watery the gravy but otherwise palatable. Cost: $16 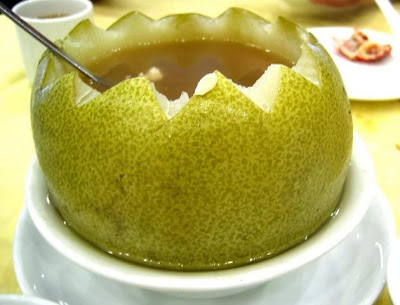 The only dish my 2 friends liked was the Whole Melon With Freshly Peeled Crab/Prawns with Conpoy. It was refreshing and went very well with my steamed rice. The melon soup had lots of ingredients; little spaghetti strips melon which looked like sharksfin, prawns, conpoy, crab, egg etc.  This dish was $28.
The total damage was $113.40 for 3 persons. Quite expensive, considering all the above points mentioned; the few number of items were out stock but we were informed much later, the waiting time was 30 minutes to an hour (the other diners also waited a long time) eventhough it was already past peak hour, the portion of the Duck dish was horrendously small and not worth the price. When we feedback about the portion of the duck and waiting time, the captain apologised and said the response that day was very good from their newspaper advertisement that they ran out of stock. No wonder. But even then, I had thought the one who took our order should have informed us earlier. We would also like to add that, although their service staff were friendly, a few of them had quite untidy and unkempt bun up hair. Not a very befitting image for a fine dining restaurant.

Although I did not have to pay for the dinner, it was a treat from Rich Friend, we were not happy with the overall dining experience. She was quite riled up that she immediately wrote her review on Hungrygowhere.  I was pondering whether to post this not-so-good review, but I think giving my honest opinion here would let other diners know and also we hope Old Hong Kong Kitchen would buck up. Perhaps it was teething problems, but then again they already have a few outlets.

It was an unforgettable and disappointing first time experience in Old Hong Kong Kitchen. We would still patronise their Cha Chan Teng in Katong (Old Hong Kong Tea House) for the more amiable, prompt service and a happier dining experience.
yours truly, STUMPBO @ 12:28 pm