I found this e-book online 'Do we have a choice?". It is written by Chan Kah Yein who encourages readers to move towards a diet of eating less meat, which is definitely more doable and acceptable than adopting a strict vegetarian diet.

The author emphasized, "This is NOT a book aimed at making you feel bad that you still eat meat. It is also not a book aimed at trying to convert you into a vegetarian. Rather, this is a book that invites you to consider EATING LESS MEAT. I was motivated to write this book because I observed that most people have a natural compassion for animals. Many do want to eat less meat, not just for health reasons or to reduce one’s carbon footprint, but for the simple reason that we all know animals suffer so much at the slaughterhouses. Out of compassion for these animals, most people do want to eat less meat. But sometimes we just do not know how to start, or maybe we need some motivation to push us to do it".

You can download the e-book here.
Here is one interesting story from the book, FOOD for thought.... 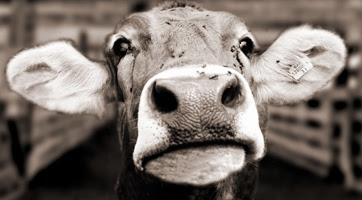 Jas grew up in Sarawak. Her parents were dairy farmers. They kept cows to provide milk for the family and also to generate income. Their cows lived a long life and, even when they could not provide anymore milk, Jas’ parents continued looking after them until they passed on.

One day, many years after having served the family, one cow developed a bad infection on her front hoof. Apparently, such an infection is very hard to heal and would cause great pain. Many farmers would sell these cows to the butcher rather than nurse them. One such opportunist-butcher came to know about this cow with the infected hoof and offered Jas’ parents a fair price to purchase the cow. Jas’ parents, despite being in need of the money, flatly refused to sell the cow. They told the butcher, “This cow has served my family and provided milk for my children for so many years. How can we sell her now that she is old and injured?”

After the butcher went away, the cow walked towards Jas’ parents. She held up her injured hoof. And she cried. I would like to believe these were tears of gratitude. The cow lived on until she finally passed on peacefully at a ripe old age.


I could totally relate to this story. I have not taken beef for almost 7 years. Although I am not a full time vegetarian yet but I am consuming considerably less meat than I was many years ago. Many of my faithful readers would remember that it was due a dream I had one night after an initiation. I was walking in an enclosed wet big kitchen which was chilly, as if I was inside a freezer. I saw a huge chopping board on a table. On it laid a cow carcass which was just freshly slaughtered. Its body was all white and I saw the head of the cow, its mouth slightly apart, and eyes wide opened. The eyes looked of fear and terror, and they were brimming with tears. Its whole body was stained with blood everywhere. I could still smell its fresh blood. I saw myself cringing in the dream. That was why I did not touch beef from then on. 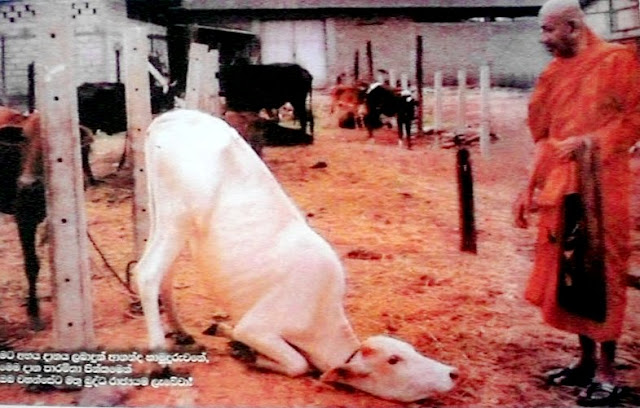 The above photo was taken in late 2008 in Sri Lanka. Apparently a monk came to a slaughter farm to stop and to save cows from being killed. After he had done so, this white cow fell in front of the monk and prostrated to him! Prostration is a traditional way of paying respect to the Buddhas and Sangha. How amazing is that!
yours truly, STUMPBO @ 10:24 am