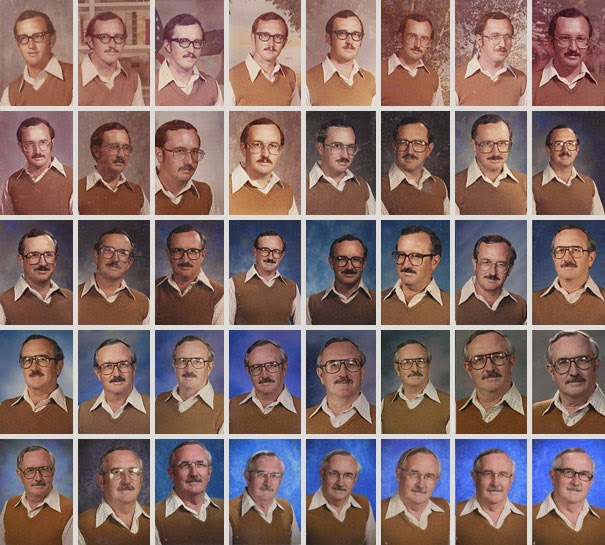 I read an article this morning about this teacher in the USA who wore the same outfit for his school's yearbook pictures for 40 years from 1973-2012. FORTY YEARS. Mind you, it's the SAME outfit, not similar outfit. Although it's perfectly fine and nothing wrong with this, I got to salute this guy, for the fun of it. Heck, it was only but once a year.

It brought back immediate memories of my Physics teacher in secondary school, Mr P, who not only wore the same or similar outfit for photos, but he wore it everyday. EVERYDAY, EVERY SINGLE DAY without fail, it was a neatly ironed (well starched) white short-sleeve shirt and navy blue pants. Plus his thick hair was combed neatly swept across from one end to the other. Even strong winds didn't seemed to ruffle the hair. Once a classmate even attempted to pull his hair just to check. No, it was not a wig, even though it did looked a little stiff. Probably the power of Brylcreem.

Mr P was a good teacher although his behavior was quirky most of the time. My more cheeky classmates liked to tease him during his lessons and he still continued his teachings with a straight face. Haha. Anyway, all of us adored Mr P in a delightful way, even though I hated science in school.

Then last week, Facebook founder, Mark Zuckerberg, explained why he wore similar grey T-shirt every single day. He has a whole wardrobe of greys in the same cutting, and the reason he gave for wearing the same color outfit everyday was so that he didn't have to waste time deciding what to wear. He didn't want to waste energy on silly frivolities, choosing to focus on more important decisions of his giant social media company.

Someone in my Facebook timeline promptly shared this piece of news gleefully, concluding that wearing the same clothes everyday is 'normal'. Yes he seems to wear the same color outfit himself almost everyday too. There's another guy in my neighborhood who is also always wearing the same pastel yellow polo T-shirt everyday. I don't know him, it only made me recognize him, that's all. I cannot imagine myself wearing the same coloured clothes my entire life.

So what is normal? When a famous personality like Zuckerberg says so, or do so? Does success equate to wearing the same clothes everyday? Or is it simply an excuse for laziness? Wearing the same old boring clothes doesn't necessarily make a man successful or a genius.

Steve Jobs, with his signature black turtlenecks (designed by Issey Miyake) and jeans, got inspired when he saw Sony's employees in Japan wearing the same uniform at work, and thought he could adopt the same for his Apple staff in order to promote bonding. He got booed, everyone hated the idea.

Psychologists called this phenomenon, 'decision fatigue', or analysis paralysis, which stipulates that when faced with many potential choices, our decision making processes slow down to the point where action is never taken.

Men, in general, presumably don't like the hassle of having to decide over the little things in life. Ladies, on the other hand, live to dress well. Clothes can make a man (more likely a woman). How well one dresses can lift the mood and I personally prefer variety over the same old thing everyday. I do not fancy the idea of wearing the same outfit day in and day out, although I would not be caught dead wearing a black top at all. We all have our favorite colors or designs. What one wears should project that air of confidence. Being comfortable in your own skin is much more important. Not having to make little decisions of what to wear or eat doesn't make us better in making the grand important decisions. I guess we all have our own idiosyncrasies; we have to live with ours as well as others, be it a routined or multi-faceted choice.