The leaving of Geshe Jinpa 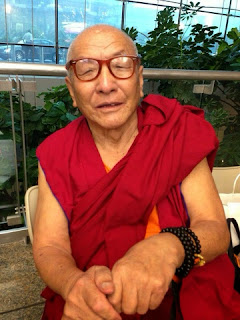 Received news a couple of nights ago that 86-year-old Geshe Jinpa had passed away and he was in thugdam (clear light meditation) for 2-3 days. Yesterday morning in Gaden Shartse Monastery, his body was offered to the fire on the auspicious day of Lhabab Duchen.

Geshe la was known to be very skilful in conducting many powerful pujas. Despite constraint in mobility, Geshe la was limping, he still visited Singapore numerous times together with the Rinpoches and monks. The most memorable puja to me was when he conducted 2 grand fire pujas in 2012 concurrently together with Healing Lama His Eminence Kangyur Rinpoche. More than 1000 devotees turned up that night and it was a fantastic experience. We nicknamed Geshe Jinpa the "Xi Xi Geshe la" because of his unique way of saying 谢谢 (thanks in mandarin). 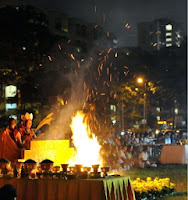 Checking back my old photos taken in the past, I found many photos I've taken of Geshe Jinpa, especially those in the airport when we were sending him off. He was so friendly and gladly obliged photos with each of us as well as blessing us. I guess that was what touched me most.

I always made it a point as much as possible to send the monks off at the airport whenever they were flying back to the monastery. Over the years there were so many different batches of monks who came to conduct pujas for us. I observe and always feel that when it comes to the monks, they understandably do not receive as much fanfare compared to the Rinpoches. While throngs of followers or devotees would turn up to send Rinpoches off, there are significantly lesser people when it comes to the rest of the ordinary monks. That is the reason why I feel strongly I should do it, as a sign of appreciation for them as well as recognizing their efforts and hard work during their stay here. We should treat  the Sangha community with equal respect, no matter what position they are, for they are the ones who might become great teachers and masters in future lifetimes. 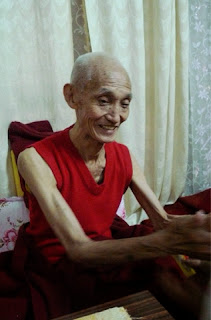 I last saw him in the monastery when we visited him during His Holiness Dalai Lama's teachings. At that time, he was already quite thin, frail and weak. He gave us heartfelt advice and told us to keep His Holiness' precious teachings in mind. Inside his small room where almost 50 of us squeezed together, there were no dry eyes for most of us that day. Understandably, I knew it could be my last time seeing him.

May both old Geshes continue to benefit many beings in all future lifetimes wherever they choose to take rebirth. I believe we will meet again.