I have a guest room which no one sleeps in. And we've got 2 still-new King Koil single mattresses and an extra 28-inch TV brought over from the old house. So we stacked both mattresses up into a single size bed and left it and the TV in the guest room. And because no one would be sleeping in the guest room, I just "anyhow" arranged the bed as shown below in the beginning.

But recently my mom began to sleep frequently in the guest room, because 1) father was "imperfectly" snoring too loudly disturbing her, 2) my father caught a throat infection and was coughing away, she didn't want to get infected and 3) she has her private space reading in the guest room. But this got me feeling a little uneasy with the way the furniture was arranged as it was a little "salah" (wrong) in the first place. 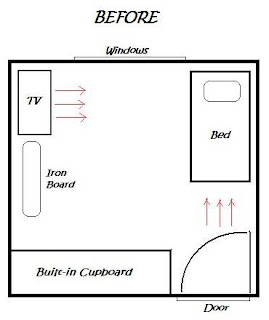 I drew this layout to illustrate. First, the bed. From what I learnt, the bed should never face the door directly. This is because of the "shar qi" that is coming from the door when one enters the room. See the poisonous arrows hitting the bed? Do not sleep with your feet facing towards a door, this is known as the 'coffin position'. In feng shui they say that a bed aligned with the door resembles a coffin that is always taken away feet first. When your feet are in line with the door, you lose your energy at night/ your energy gets weaker, as it is not properly contained, so to speak. In feng shui, doors serve as energy connectors between different areas, thus they always have a sort of pulling energy. If the bed is in line with the door, your energy will be constantly pulled at night. So it was definitely a no-no, a most unfortunate position to sleep in!

Next, the big TV screen is also facing the bed. Again more shar qi. The glass TV panel is akin to a mirror which reflects and this should never never face the bed. The basic advice is to avoid positioning them where you can see your own face whilst in bed. They are said to reflect one's negative energy when one is sleeping, thereby causing nightmares. This principle applies to any object that reflects like paintings, computer screens or metal surfaces.

I am no feng shui guru, but I think these are basic rules to observe. So I shifted and rearranged the bed and the TV and ironing board to the below. I covered the TV with a thick green table cloth as there was no where else I could place the TV. 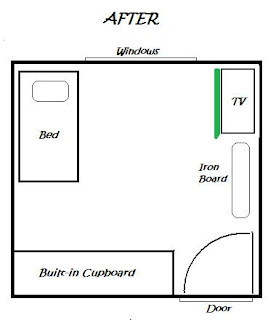 After that, I explained to mom why I had to shift the bed. She immediately looked relieved. She quickly told me, in fact she was having nightmares recently whenever she sleeps in the guest room. She dreamt of her 3rd uncle (my grand uncle) in his old house. He was bedridden for many years due to sickness, and when he passed away, his body was moved out of the door feet first, exactly the "coffin position" in the dream. My mom was petrified because her uncle has passed away for more than 20 years! And it was the first time she dreamt of him, his passing away, his house, his room, exactly where the bed was facing the door!

I told mom she should have told me earlier! Imagine what other unfortunate consequences which could have happened, all because of the silly bed and TV! Hopefully, she would have a more peaceful sleep now and no more nightmares!