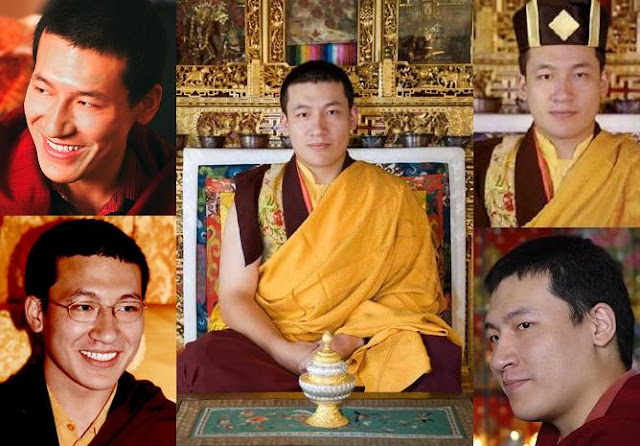 Hmmm..... last night I dreamt of the 17th Karmapa Trinlay Thaye Dorje. It was a long dream but I forgot most of it. I only remember when I woke up, his image was still very fresh in my mind, it was very real and I was full of question marks. In the dream, the Karmapa appeared very briefly for just a few seconds. He was just smiling exactly like the photo above (the one wearing specs) and looking at me (don't know what he was trying to say to me). I could not even remember what happened prior to his appearance. I don't remember being in any holy place. I did not see any holy objects. It was just his face. Hmm.... anyway, this Living Buddha is quite handsome and he is only 26 years old.

Why I was full of questions?

1. Prior to this dream, I have never had any connection with Him. I have not met him personally and have not followed any of his news or teachings. And the most coincidental thing is, this morning I received an email from a Kagyu group in Singapore informing me of the 17th Karmapa's blog!

2. There are 4 schools in Tibetan Buddhism. The Karmapa is the official Head of the Karma Kagyu school. I tend to follow more of the Gelugpa school, its teachings and gurus like the Dalai Lama, Lama Zopa Rinpoche and Kyabje Lati Rinpoche.

3. In 2005, I did have a dream which I blogged about here. The Rinpoche I dreamt of, I did not even know who he was and I concluded He was Guru Rinpoche himself! Guru Rinpoche (an emanation of the Buddha Amitabha) was the very first master who brought Buddhism to Tibet in the 8th century, manifesting countless wonders and is highly revered by all the schools of Tibetan Buddhism. In that dream the Rinpoche was fair complexion, just like this 17th Karmapa who looked more chinese than other Tibetan masters (who are mostly a little tanned looking). In that 2005 dream and last night's dream, the Rinpoche was wearing a square Black Hat.

Again I do not know the meaning of this dream. Maybe this Karmapa has some karmic connection with me in my previous lives. Maybe He is going to appear in my life soon.

Karmapa means "the embodiment of all the activities of the buddhas." The Karmapas have incarnated for 17 lifetimes, as of the present, and all have played the most important role in preserving and propagating the Buddhist teachings of Tibet. The arrival of the Karmapa was been prophesied by Buddha Shakyamuni in various sutras and tantras, and also the great tantric master of India, Guru Rinpoche (Padmasambhava). Throughout the centuries, Karmapas have been the central figure in the continuation of the Kagyu lineage in particular, and have played a very important role in the preservation of the study and practice lineages of Buddhism.