Purifying the veil of karma

By chance, when one of my aunts came over today, we decided to go for a puja and initiation of Amitabha Buddha. I had happened to see a poster about the event outside the day before. I could not even remember which centre, which Rinpoche, what program, what time..... I only remember it was in Teochew Building sometime today (Teochew Building is one of my favourite places to attend pujas/initiation). I just noted it was Amitabha Buddha, whom most of us are familiar with.

As I was free today, I asked my aunt if she was interested, she said why not (she is a very pious Buddhist). So that was how we spent the entire afternoon (puja) and night (initiation). When we reached at 1.30pm (I presumed it would start at 2pm and I got it right), the Rinpoche just arrived and we bumped into him downstairs. Then I realised it was a Karma Kagyu group who organised the event, and I also saw the photo of the 17th Karmapa there! Wah. 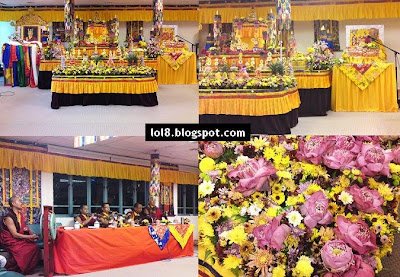 His Eminence Gyaltsab Rinpoche is a leading incarnate lama (tulku) in the Karma Kagyu lineage. He is the 12th Gyaltsab Rinpoche (a dharma king) believed to embody the activity of Vajrapani. He holds the title Goshir (which meant "state teacher"). He is the regent looking after the interests of the Karmapas. 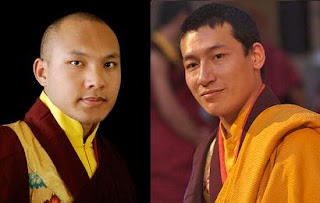 Those who are familiar with Kagyu lineage, probably know of the two 17th Karmapas. There is ongoing controversy as two Karmapas had been recognised. Beru Khentse Rinpoche (whom I had met before) holds a distinct minority view, saying he believes both Karmapas are legitimate. He states "it is possible that there can be two Karmapas in order to benefit sentient beings because the Karmapa can manifest in many different forms" and writes that the 14th Karmapa highlighted that "in many universes a hundred million Karmapas have manifested. The Karmapa is also the Buddha's emanation, thus until all the thousand Buddhas have come and their doctrine is not diminishing, my activity of the Karmapa emanations will not end."

To me personally, I have not decided to take either sides yet, as I am not familiar with both Karmapas and the controversy. I think the more important thing is that the Dharma is being taught to many more sentient beings. My main purpose was to attend the Amitabha initiation and puja. I was real happy I did as it was not that often that there is an Amitabha puja/initiation. Although it was not the first time I had received Amitabha Buddha initiation, it was good to "renew" the connection with him and to clear karmic obstacles. 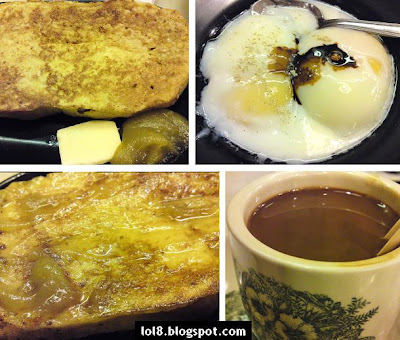 And since I was attending the event, I decided to be vegetarian for the day. Had a light lunch at Wang. I ordered the French toast set with half boiled eggs and kopi-C. I always ate the usual Kaya Toast, so this was the first time I had French toast, and I loved it. It was dipped with beaten egg and toasted, exactly the way my mom used to do it for me and sis when we were kids. After applying the butter and kaya, it was moist and so nice! Think I won't order the usual kaya toast anymore. :D 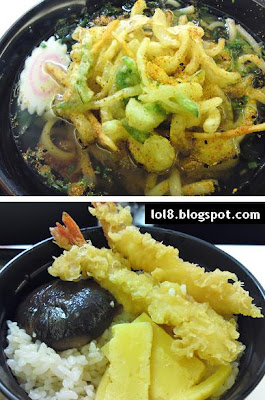 Then during the dinner break, we went Liang Court to the udon stall I usually patronise. I ordered the Vegetable Tempura Udon. It was ooo-la-la. My aunt ordered the Tempura Prawn Don.