Filial piety is free, no?

Many of you may have watched the recent TV ad launched by The Ministry of Community Development, Youth and Sports (MCYS) on "Filial Piety". The objective of this campaign in gist is to promote filial piety, urging Singaporeans to lead by example if they want the next generation to care for them when they grow old.


A somewhat touching effort, but I was appalled that MCYS actually spent S$1.6 million to produce this ad, and by engaging a Hong Kong director, David Tsui, to do it. What happened to promoting local talents? Morever, couldn't this huge amount of money (from tax payers) be better channeled elsewhere, for example, to the old, sick and needy who may not have filial children to take care of them?

Bloggers furrybrowndog and thinkingbetterthinkingmeta have posted entries on this which are worth a read.

The Online Citizen (TOC) spinned off another take on the Filial Piety ad, the "What was not shown" version, with this : 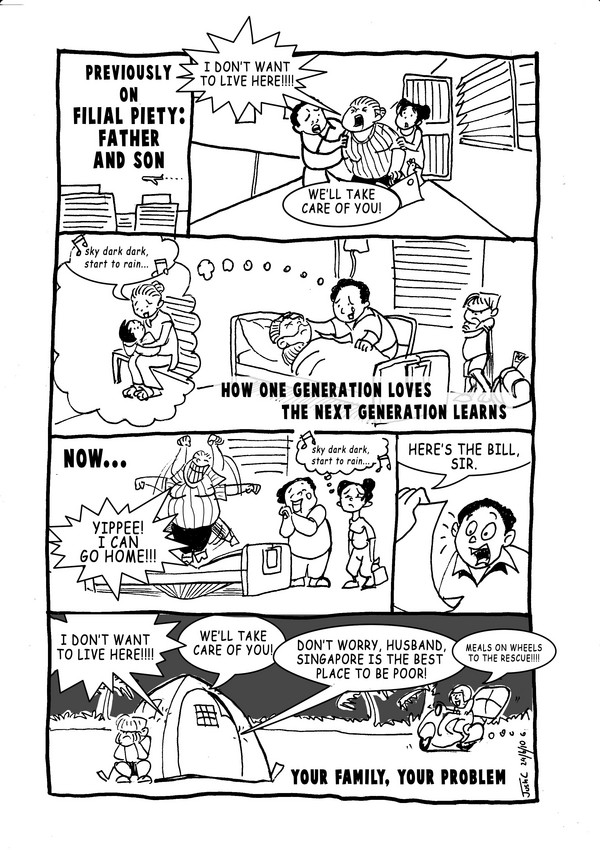 And TOC quoted the Minister: “If you were a poor person, anywhere on this planet, Singapore is the one place where you will have a roof over your head, where you will have food on the table. Even if you can’t afford it, we will have meals delivered to you…” – MCYS Minister, Vivian Balakrishnan. (27 March 2010)

Reality or jokes aside, again, it is not that the subject ('Filial piety") should not be broached, but rather the method of promoting it (extravagant spending and somewhat unrealistic stereotyping) is questionable.

In Confucian ideals, filial piety (in Chinese 孝) is one of the virtues to be held above all else: a respect for the parents and ancestors.

Generally speaking, according to Wikipedia, filial piety means:
1. Being good to one's parents;
2. To take care of one's parents;
3. To engage in good conduct not just towards parents but also outside the home so as to bring a good name to one's parents and ancestors;
4. To perform the duties of one's job well so as to obtain the material means to support parents as well as carry out sacrifices to the ancestors;
5. Not be rebellious; show love, respect and support;
6. Display courtesy;
7. Ensure male heirs, uphold fraternity among brothers;
8. Wisely advise one's parents, including dissuading them from moral unrighteousness;
9. Display sorrow for their sickness and death;
10. Carry out sacrifices after their death.

Erm... I do not entirely agree with all the points if they are what define filial piety. Obviously, times have changed. While I agree with points 1 to 6, they are common sense, and how we should treat everyone in general, what more to our parents?

However, I do not agree with point (7). One can have 10 sons yet none of them are filial, and having daughters can be equally filial (if not more!). And points (9) and (10), I am not sure what they mean by "displaying sorrow", but whilst we will and do feel sad with our parents' illnesses and death, who are we trying to 'show off' our sorrow to? The Buddhist teachings have taught me, instead of being sad, we should be doing good deeds and creating merits on behalf of our parents while they are still alive, so that they can have a precious human rebirth in their next life. Why? So that hopefully they can have the chance to learn the Dharma and thus be enlightened. We do not have the ability to learn the Dharma if we are reborn as animals. So dedicating our merits to our parents is a gift which can be brought with them after death. This, to me, is filial piety, on top of other material wants.

Lest I sound too righteous, no, I am not filial enough, or at all, based on the above points. I am not filial in the sense I am still not able to provide much material comforts to my parents. And I still lose my temper, especially to my father, when we do not see eye to eye, or when he screws up his computer for the umpteenth time. And I can often be stubborn, refusing to listen to my parents' advice. I think being able to forgive one another goes both ways, and I have a long way to learn.

Long ago, a nun gave me a piece of hardcopy, When I Turn Old 当我老了 and she said to read it on and off to remind myself of 'filial piety'. When I read it, tears just welled up. Found this in Youtube...


Found another clip and I think this is so much more touching and more meaningful than the MCYS ad. Here it is.... and it's free.